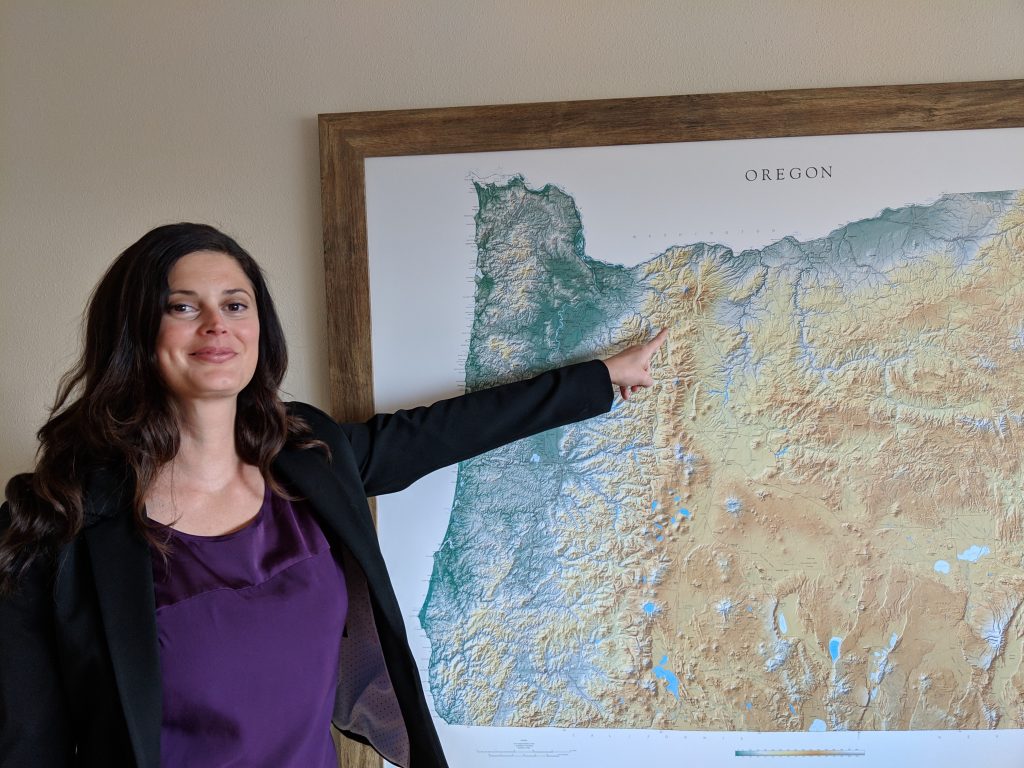 Few wolves have captured the hearts of the public like “Journey,” who in 2011 traveled more than 1,000 miles to become the first wild wolf to set foot in California in over a century. But what’s not public knowledge is that Journey’s journey nearly ended before it began, with a bullet from a federal wildlife-killer’s gun—and that it was WildEarth Guardians Senior Staff Attorney Jennifer Schwartz who helped spare him and his siblings from slaughter.

As Staff Attorney and Program Director at the Hells Canyon Preservation Council in eastern Oregon, Schwartz had a front-row seat for the conflict between the state’s nascent Imnaha Pack and the ranchers operating in the area’s heavily grazed national forests. Nevertheless, she was aghast when the state authorized the execution of two members of the pack, absent any environmental analysis—even though there were as few as 13 wolves in the entire state at the time. She argued an emergency motion in federal court that halted the kill order, securing Journey’s place in wolf lore and marking the first of her many victories for wildlife to come.

Hearing the Call of the Wild

Schwartz’s own journey to an environmental litigation career began inauspiciously in her birthplace of Los Angeles. Despite growing up in an urban environment, she developed a deep passion for wildlife, particularly wolves, at an early age. A move to the then-undeveloped outskirts of Tucson, Arizona for her mother’s work with American Airlines brought Schwartz’s first close encounters with the Wild outside her front door. As an L.A. transplant, she marveled at tarantulas emerging after monsoons, rattlesnakes sunning on roads, and squadrons of javelinas cruising through the Canyon del Oro wash she frequented with her dogs. As her move coincided with the early 90s southwest development boom, she also witnessed a lot of desert habitat bulldozed for strip malls and subdivisions.

These experiences culminated in her first nonprofit conservation gig: seventeen and a senior in high school, she joined the canvassing crew for the Center for Biological Diversity (just a small, regional organization at the time).

“Suddenly I was a political activist, going to protests and helping organize demonstrations for stopping logging on the North Rim of the Grand Canyon and building support for Mexican wolf and jaguar recovery in the southwest,” she says. She even tagged along to one of the first releases of Mexican gray wolves on the border of Arizona and New Mexico in 1998.

At the Center, Schwartz discovered that environmental law could be a legitimate career path. So after earning a B.A. in politics from the University of California, Santa Cruz, she was off to Portland, Ore., to earn her J.D. from Lewis & Clark Law School. 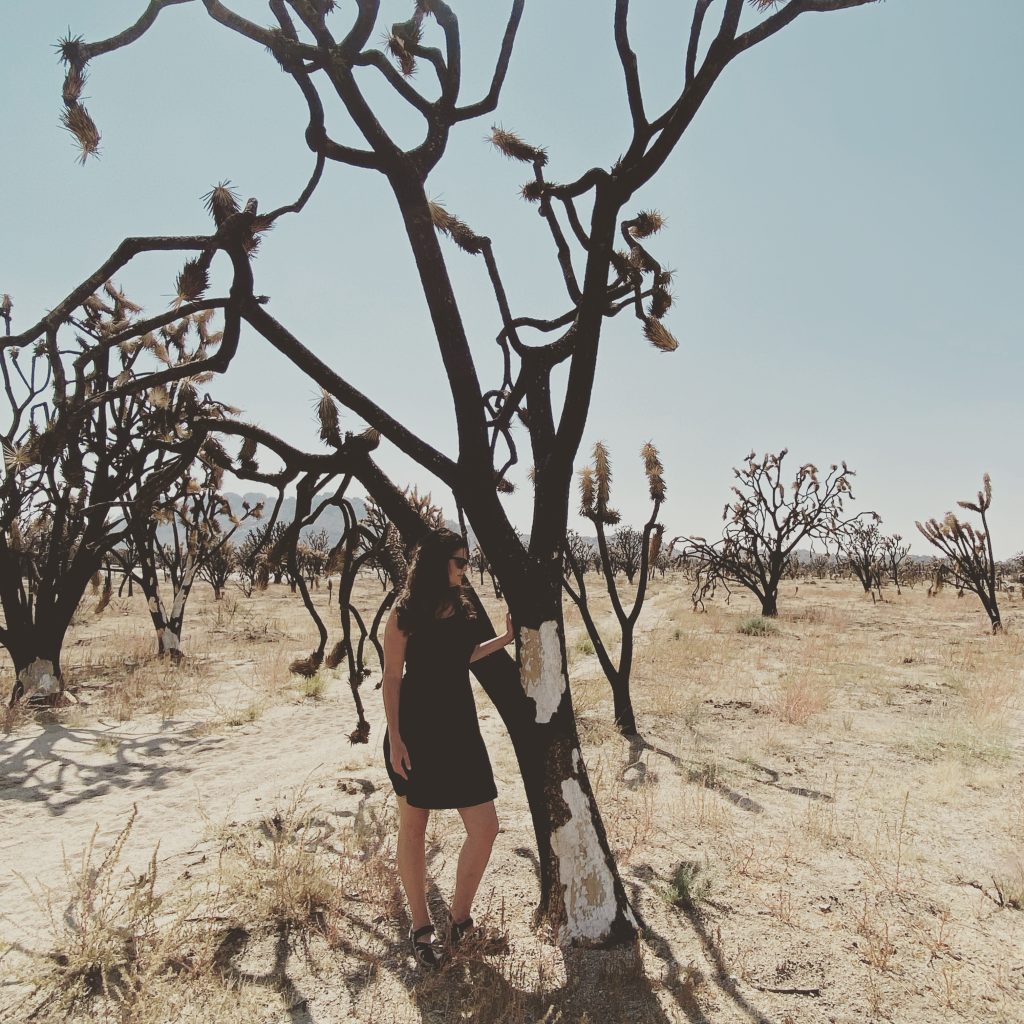 Jennifer surveys the damage to Joshua trees from the Dome Fire in the Mojave National Preserve during a field trip with a LA Times reporter.

Speaking for the Trees

Schwartz left her job at the Hells Canyon Preservation Council in 2012 to have her son. For a time, she was both a parent and a solo practitioner, filing timber sales litigation to end logging in old-growth forests throughout the Pacific Northwest. The work was rewarding, but grueling, so she jumped at the chance to join Guardians in 2019 and litigate on behalf of our Wildlife Program.

Schwartz returned to her desert roots for her first case at Guardians: advocating for the desert Southwest’s iconic Joshua trees.

In 2015, Guardians petitioned the U.S. Fish and Wildlife Service to list both the western and eastern species of Joshua tree as threatened under the Endangered Species Act, citing climate change’s devastating effects on the species. The Service denied the petition, prompting a lawsuit from Guardians.

As she dug into the case, Schwartz “quickly realized there’s a whole body of climate science the Service just summarily dismissed, including five peer-reviewed, published models, all showing that by the end of this century, Joshua trees would lose up to 90 percent of their current habitat.”

Guardians won the suit on all counts by proving that the Service had ignored this science when it refused to list the Joshua tree. As a result, the Service now has to grapple with the dire forecasts of these studies and issue a new listing decision for the tree this coming January—offering the beleaguered species a much-needed shot at survival in the decades to come.

Outside of her Joshua tree litigation, Schwartz has been hard at work spotlighting the atrocities of the secretive federal wildlife-killing program, Wildlife Services. The program indiscriminately slaughters millions of native wildlife each year, largely at the behest of livestock producers, and “justifies” the extermination with spurious, archaic science. In states like Montana and New Mexico, Schwartz and Guardians have dragged Wildlife Services’ activities into the light and before the courts; as a result, the program has agreed to curtail or end some of its most heinous killing methods, from body-gripping traps to cyanide bombs, and to cease “predator control” activities on specially designated public lands.

Yet these wins, though impressive, are only temporary, lasting as long as Wildlife Services takes to prepare new environmental analyses. Schwartz has therefore opted to take a different tack in her more recent litigation, broadening her focus to also address the role of federal land managers—mainly the U.S. Forest Service and Bureau of Land Management—in responsibly managing the livestock grazing across federal lands that are prime habitat for native carnivores.

It was Schwartz’s beloved wolves who inspired this strategic shift—in this case, 31 wolves massacred in response to cattle depredations on the heavily grazed Colville National Forest in the state of Washington. The state circumvented Guardians’ 2015 court victory stopping Wildlife Services from killing wolves in Washington by instead having their own state wildlife agency step in. So Schwartz “suggested we focus our litigation on directly addressing the Forest Service’s mismanagement of livestock grazing on national forests, since that’s the primary driver of wolf mortality in Washington.”

In a similar vein, Schwartz filed another case this past December that targets federal agencies’ mismanagement of livestock grazing practices in Nevada—and their eagerness to permit killing sprees of native wildlife across the state, including on more than 6.2 million acres of Wilderness and Wilderness Study Areas.

She envisions a future where, instead of condemning wolves simply trying to live their lives, federal land managers require grazing permittees to adopt common-sense, science-backed practices shown to effectively reduce the risk of wildlife-livestock conflicts, such as employing range riders; keeping herds bunched up in open, defensible spaces; avoiding turning out of vulnerable young lambs and calves; and keeping livestock away from wolves’ denning areas.

“Native wildlife put the ‘Wild’ in Wilderness. Killing them on the behalf of commercial livestock producers just doesn’t jibe with that,” she says. 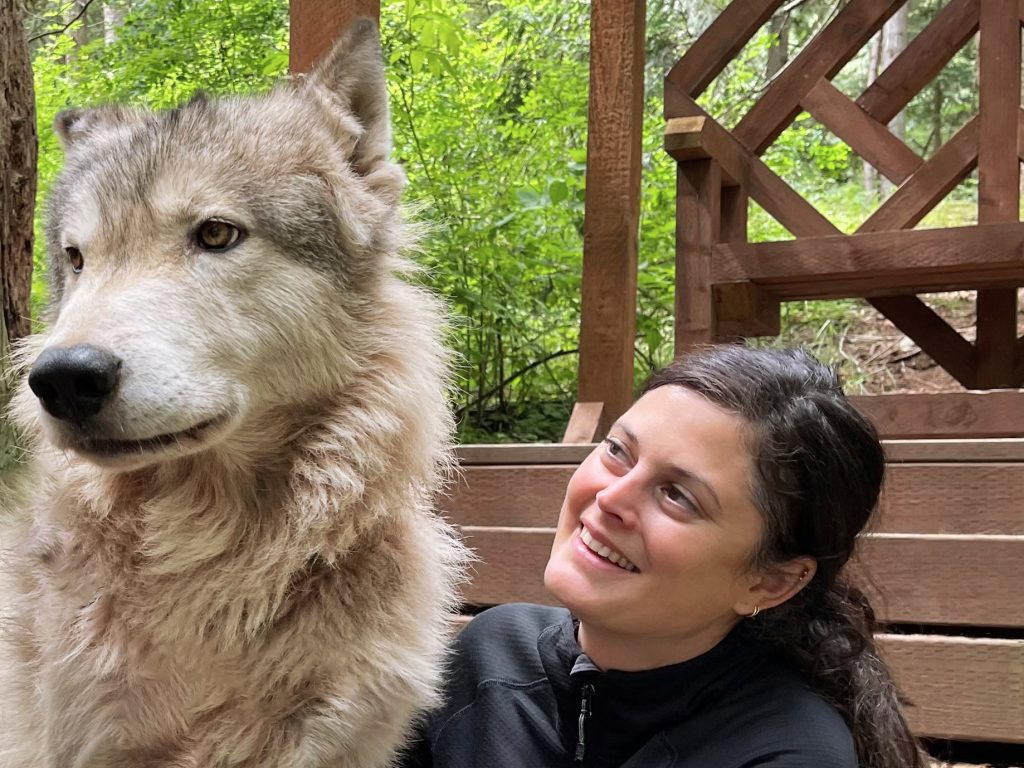 Jennifer with a gray wolf at “Predators Of The Heart” Animal Sanctuary in Anacortes, WA.

Fighting for the Future

Three years into her time at Guardians, Schwartz’s enthusiasm shows no signs of waning. She lights up when she describes her latest case, safeguarding and recovering the critically endangered black-footed ferret.

Her son, now nine, is always willing to lend an eager ear. Schwartz, in turn, is always “thinking about his generation, how to ensure a biologically rich, diverse world for them to enjoy,” she says. “Having a child makes me fight harder for that future.”

If her past achievements are any indication, we—and the Wild—can expect fine things from that fight.