Activists delivered a letter and held a press conference outside the Governor’s office in front of a tower of over 300 “Toxic Produced Water” cans, symbolizing the more than 300 spills so far in New Mexico in 2020 – three spills each day – which are already contaminating land and water and creating a current public health crisis across New Mexico.

For every barrel of oil produced, industry consumes an average of 3 barrels of fresh water, and produces 4-7 times as much toxic “produced water.” Hardly water, this “produced water” is too toxic to treat, and is actually a dangerous cocktail of radioactive materials, heavy metals, proprietary fracking chemicals, and other contaminants known to be carcinogenic and dangerous to human health and the environment.

Governor Lujan Grisham has said that dumping fracking industry waste onto farms, into streams, and into drinking water supplies, would be “Good for New Mexico.”

You know what would be good for New Mexico? Actually protecting New Mexicans from a tsunami toxic spills of frack waste.”

According to the report, which was released last week by Earthworks, “more than 1.4 million gallons of produced wastewater have ended up running over the surface of the earth from 327 spills in the first eight months of 2020 alone. The total volume spilled would cover 4.4 acres with one foot of liquid oil and gas toxic wastewater.” Only 40% of contaminants spilled into the environment were recovered. Horrifyingly, these spills are permitted, the cost of doing business-as-usual, and are largely preventable with the most frequently cited cause of discharges being equipment failure.

Every day oil and gas waste is leaked, spilled, and exploded across New Mexico due to industry’s improper storage, processing, and disposal of its waste.

Finding regulations glaringly inadequate to address the current risks oil and gas waste poses to the environment, worker safety, and public health, demonstrators today hope the Governor will see the wall of toxic fracking waste outside her window and use the report as an opportunity to course correct and direct her Oil Conservation Division to adopt rules that address the public health crisis the mismanagement of “produced water” is posing. 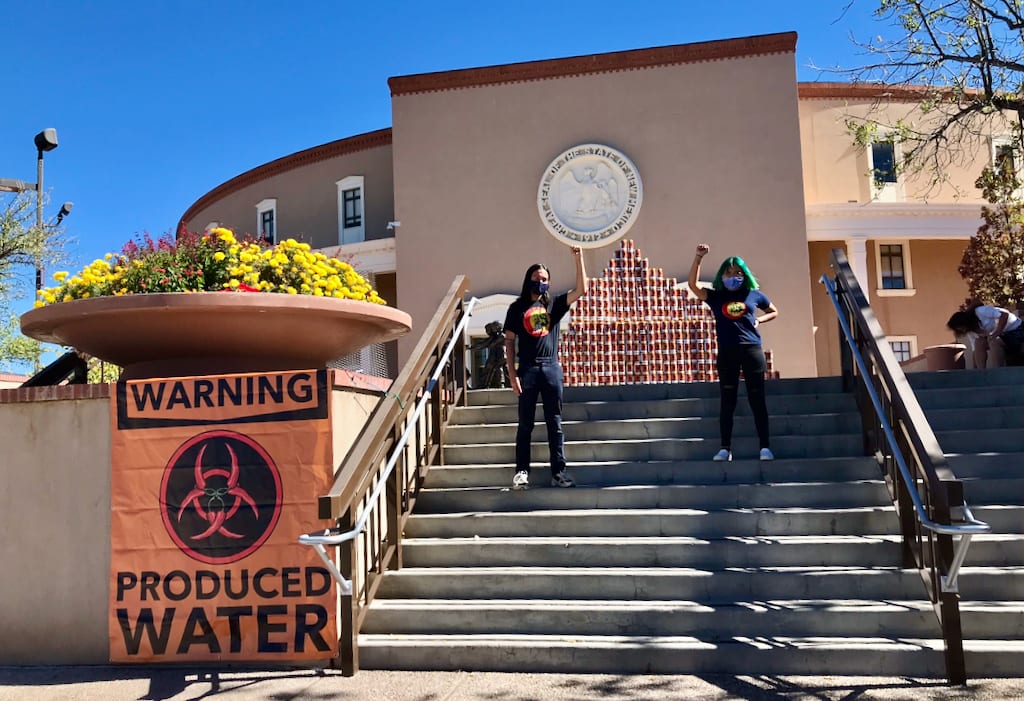