The call comes as the Commission today weighs whether to ease regulation of the oil and gas industry’s “produced water” and as a New Mexico legislative committee hears testimony on the subject. WildEarth Guardians will be one of the four panelists providing testimony.

“If New Mexico is serious about protecting public health and the environment from the oil and gas industry’s toxic waste, then regulators need to ensure that irresponsible, careless, and unsafe handling is no longer tolerated,” said Daniel Timmons, Staff Attorney for WildEarth Guardians.  “While the New Mexico Oil Conservation Commission claims to want to protect people from the oil and gas industry’s waste, it’s disturbing that spills remain legal and rampant.”

In a formal petition filed with the Oil Conservation Commission, Guardians called for the adoption of a rule that expressly outlaws spilling of “produced water” and waste by the oil and gas industry.

“Produced water” is a term used to describe the fluid waste produced by the oil and gas industry during drilling, fracking, and production. This waste contains a hazardous cocktail of corrosive salts, heavy metals, and radioactive materials, and is so toxic that it can’t be treated. In spite of this, “produced water” is widely spilled in New Mexico.

Today’s petition comes as the Oil Conservation Commission is set to adopt new rules governing the oversight of “produced water.” The rules will allow the oil and gas industry to use “produced water” in drilling and fracking, but they don’t address the issue of spills.

In July, the Commission heard testimony from the public and a number of parties opposing their proposal because it failed to enact standards to fully protect health, safety, and the environment. While officials claimed the rules would tighten oversight of “produced water,” the proposed regulations actually opened the door for “produced water” to be discharged into streams, onto crops, and in drinking water supplies.

At the July hearing, it was highlighted how the oil and gas industry regularly spills fracking waste in New Mexico, impacting waters and lands in the state. In spite of dangerously regular spills of “produced water” in New Mexico, they’re not illegal. While regulators require reporting and clean up, it is not a violation to spill.

“People are overwhelmingly concerned and outraged that New Mexico regulators are easing regulation of the fracking industry’s toxic waste when companies clearly are incapable of safely handling their waste right now,” said Rebecca Sobel, WildEarth Guardians’ Senior Climate and Energy Campaigner.  “The fact that even one spill of ‘produced water’ happens in New Mexico should be a red flag that industry can’t be trusted and that safe regulation is simply impossible.”

A New Mexico interim legislative committee is also set to hear testimony today from WildEarth Guardians and others on the subject of “produced water” regulation.

WildEarth Guardians’ Staff Attorney Daniel Timmons intends to testify, speaking to the fact that the oil and gas industry’s waste is improperly exempted from state hazardous waste law and that current regulations fail to ensure that “produced water” handling is truly protective of public health, safety, and the environment.

A copy of the request for rulemaking is available here >>

A copy of WildEarth Guardians legislative testimony is available here >> 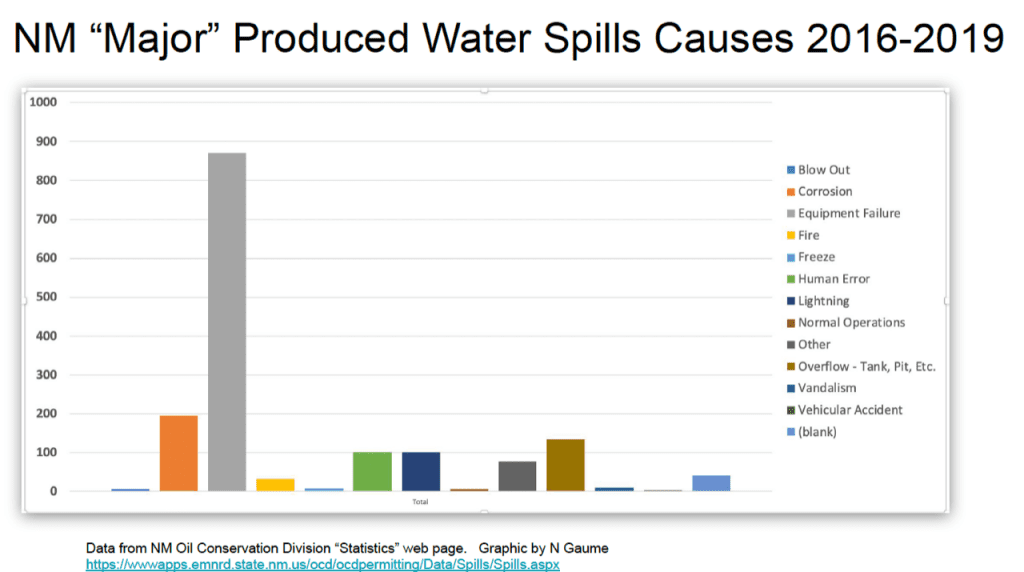 “Produced water” spills in New Mexico are overwhelmingly caused by human error, poor maintenance, and unsafe practices in the oil and gas industry.