Wildlife   Gray wolf
#EndangeredSpeciesAct, #ProtectWhatYouLove, #StopExtinction
MISSOULA, MONTANA—Despite a groundswell of public opposition from individuals across the nation, the Montana Fish and Wildlife Commission this past Friday declared open season on wolves in the state, clearing the way for nearly 50% of the state’s wolf population to be decimated in the upcoming hunting and trapping season.

In a 3-2 vote, the Commission adopted new regulations to expand wolf-killing quotas and allow various barbaric and unethical methods for hunting and trapping wolves during the upcoming 2021-2022 season, slated to start this fall. These new rules were approved despite 90% of the 26,000 comments received by the Commission expressing opposition to more liberal wolf hunting and trapping.

The new regulations allow strangulation snares, baiting, and night hunting, and allow hunters and trappers to kill up to ten wolves per person with just a single license. The draconian regulations also eliminate any cap on the number of wolves that can be killed in hunting and trapping zones bordering Glacier National Park and Yellowstone National Park.

“The changes to the upcoming wolf season harken back to an era when people sought to exterminate wolves altogether, and nearly succeeded,” said Sarah McMillan, conservation director with WildEarth Guardians. “Guardians is engaged in legal and political advocacy at every level to fight to protect wolves from state politicians dead-set on extermination by allowing various barbaric and unethical killing methods.”

The new hunting and trapping regulations follow recent bills signed into law by Governor Gianforte requiring the Commission to reduce the number of wolves in the state and to make some allowance for snaring.

In response, WildEarth Guardians and a coalition of fifty conservation groups asked the U.S. Fish and Wildlife Service to immediately restore Endangered Species Act protections to gray wolves in the northern Rocky Mountains in June. In July, Guardians and allies also petitioned the Biden administration to list the Western North American population of gray wolves as a distinct population segment.  Over 120 Tribes have also signed “The Wolf: A Treaty of Cultural and Environmental Survival,” and have called on Interior Secretary Haaland to meet with a Tribal delegation regarding the Treaty and to reinstate protections for wolves. So far, the Biden administration has failed to respond to any of these requests.

“As we clearly warned would happen, state ‘management’ of wolves essentially amounts to the brutal state-sanctioned eradication of this keystone native species,” said McMillan, based in Missoula, Montana. “We must not abandon wolf-recovery efforts or allow anti-wolf states, hunters, and trappers to push these iconic species back to the brink of extinction.”

The Commission’s rule changes also threaten imperiled species other than gray wolves. Montana is home to grizzly bears and Canada lynx—both species are protected under the Endangered Species Act, and both share habitat with wolves. Snares and traps indiscriminately kill these and other “non-target” animals.

Montana’s hunting regulation changes come on the heels of the Biden administration doubling down on its commitment to keep all wolves federally delisted, despite the massive public outcry from the public. On Friday, the U.S. Fish and Wildlife Service filed a brief in federal court opposing legal efforts from multiple environmental groups—including WildEarth Guardians, Western Environmental Law Center, and Earthjustice—to challenge the federal delisting rule. This case is set for oral arguments in Northern California District Court in November 2021. As the Northern Rocky Mountain population of wolves was delisted by an act of Congress in 2011, the outcome of this litigation will not impact wolves in Montana.

Gray wolves became functionally extinct in the lower 48 states in the 1960s largely due to rampant hunting and trapping, including deliberate extermination efforts carried out by the federal government. Though first listed as endangered in 1967 under a precursor to the Endangered Species Act, gray wolves only began to recover in the West following reintroductions to central Idaho and Yellowstone National Park in the mid-1990s. Scientists estimated a steady population of about 1,150 wolves in Montana between 2012 and 2019. However, hunters and trappers killed 328 wolves in Montana during the 2020-2021 season, and the Montana Department of Fish, Wildlife and Parks now estimates that only 900 to 950 wolves remain in the state. 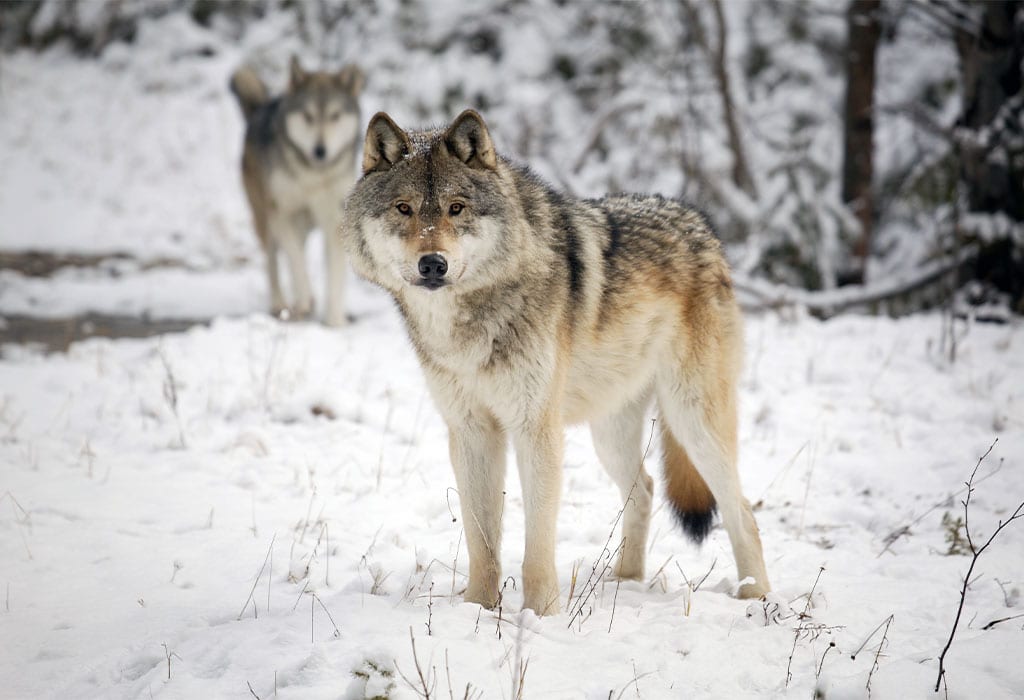