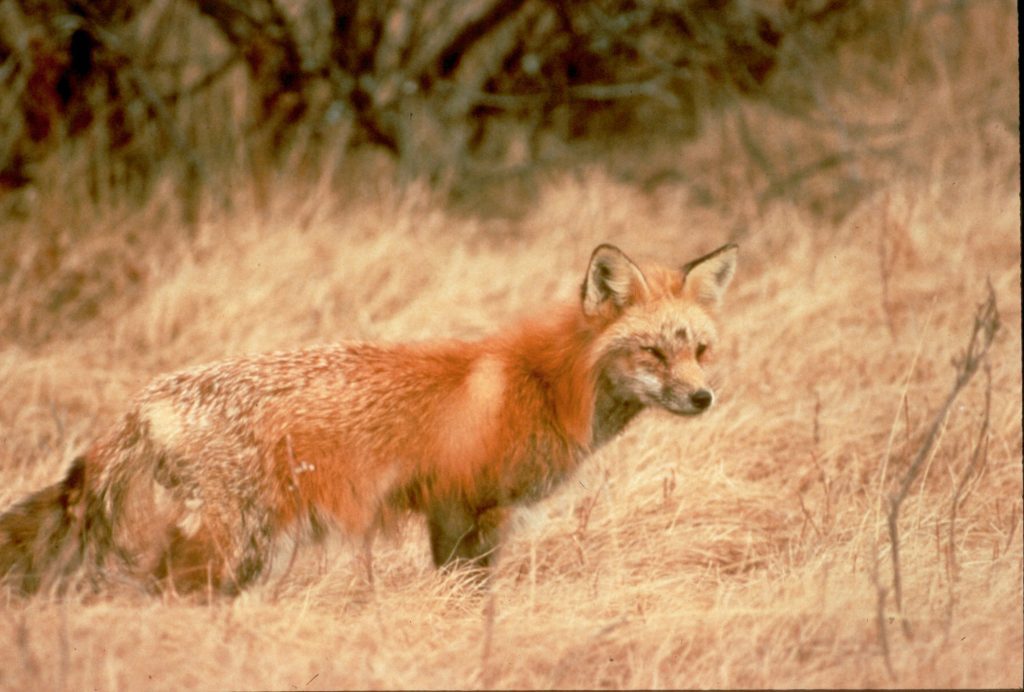 Guardians and the California Wilderness Coalition have intervened in a lawsuit brought by snowmobiling interests that are challenging the Forest Service’s decision to designate over-snow vehicle (OSV) trails and use areas on the Stanislaus National Forest in California’s Sierra Nevada.

We intervened in the lawsuit because the Forest Service hasn’t properly considered the impacts snowmobiling will have on an isolated remnant population of 18 to 39 Sierra Nevada red fox (Vulpes vulpes necator), which live within the Stanislaus National Forest in the vicinity of Sonora Pass (elevation 9628’).

Despite its name, the Sierra Nevada red fox can have black, gray or tawny fur (the gray fox, Urocyon cinereoargenteus, is a separate species). Its thick, deep winter coat, longer hind feet, and small toe pads completely covered in winter by dense fur make it well-adapted to the cold and deep snows of Sierra Nevada winters. It’s also smaller than the other nine North American subspecies of red fox—males average about 9.5 lbs and females about 7.5 lbs. The smaller stature could be another adaptation that allows it to travel better atop the snow, or it might simply result from the smaller amount of available prey in the subalpine habitat and high-elevation conifer woodlands in which the fox is found. Rodents and snowshoe hare are the fox’s primary food source. With prey limited at this elevation, so is the fox’s population density: 1 fox per 10 square miles.

Because the Sierra Nevada red fox is solitary, nocturnal and lives at in inhospitable elevation, confirmed sightings are extremely rare. As far back as the 1950s, there were only about two confirmed sightings per year. From 1991 until 2010 there were no confirmed sightings, leading some biologists to believe the fox had gone extinct. In 2015, a Sierra Nevada red fox was seen in Yosemite National Park for the first time in almost a century. With so few sightings, recent studies of the fox have relied on scat and hair samples to estimate its population and range, and much of its presumed behavior is taken from other subspecies.

The US Fish and Wildlife Service recognizes the isolated population around Sonora Pass as the Sierra Nevada Distinct Population Segment (DPS) of the Sierra Nevada red fox, and in August of 2021 designated the DPS as endangered under the Endangered Species Act (ESA).

The ESA provides protection to imperiled species, but also extends protections to subspecies and “distinct population segments”—a population or group of populations that are both discrete from other populations and significant to the species as a whole.  The Sonora Pass population is one of only two populations known to exist, and the only population to still inhabit its historical range in the Sierra Nevada mountains. These last few foxes are genetically distinct from another larger DPS found in the southern Cascades of far northern California and southern Oregon. Click here for an interactive map, which shows in green just how small of an area the Sierra Nevada red fox DPS inhabits.

When it listed the Sierra Nevada DPS as endangered, the Fish and Wildlife Service recognized the risk of extinction posed by the population’s small size, and hybridization with nonnative foxes.  Additionally, the Fish and Wildlife Service noted the risk posed by coyotes, which Sierra Nevada red foxes generally try to avoid by occupying snowier, higher-elevation habitats.

The Forest Service’s OSV designations will exacerbate the threats to the fox. The Forest Service’s decision included designating a 411-acre off-trail over-snow vehicle “play area” at Sonora Pass, despite evidence snowmobiles and their loud noise can displace wildlife from normal winter habitat, causing the animals to use limited energy reserves to move to other areas that may have less food and shelter.  Snowmobile use can also limit the availability of foxes’ rodent prey in two ways.  First, snowmobile traffic compacts snow, thereby reducing temperature and available oxygen in the spaces between the ground and the bottom of the snowpack, restricting rodents from those areas or lowering their survival.  Second, snowmobile trails provide coyotes easier access into areas that would otherwise be difficult to access due to deep snow, allowing coyotes to prey on rodents that would otherwise be available as prey for the fox.  Coyotes also kill foxes.

Snowmobile advocates claim the Forest Service’s OSV designations are too restrictive. We’ve intervened in their lawsuit for the opposite reason: because the Forest Service made its area and trail designations without considering the harmful effects of snowmobiles on the few remaining Sierra Nevada red foxes on Sonora Pass.