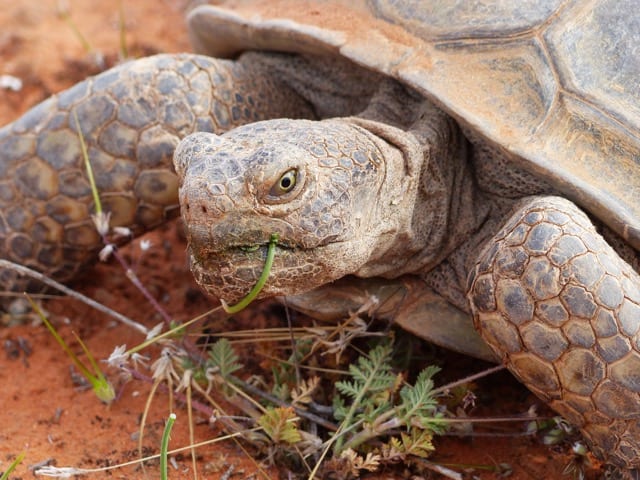 State and local officials in southwest Utah are asking the federal Bureau of Land Management to approve the bulldozing and carving of a new 4-lane highway through the Red Cliffs National Conservation Area. The request comes less than a dozen years after Congress designated the conservation area to protect habitat for the imperiled Mojave desert tortoise, which has been listed as threatened under the Endangered Species Act since 1990.

Construction of the highway, known as the Northern Corridor, would harm much of this key habitat for the threatened tortoise. The new highway would also exacerbate impacts of a July 2020 wildfire that tore through 12,000 acres of the Red Cliffs National Conservation Area, which as the local paper pointed out, impacted desert shrubs, herbs, grasses, cacti, and wildflowers that serve as shelter and food for the threatened tortoise. The truth is that the highway is unnecessary and would increase the already rapid pace of human expansion into southwest Utah.

The Red Cliffs are the northeast extent of the range of Mojave desert tortoise and a stronghold for the species. While these creatures can live up to 80 years, they don’t reach reproductive maturity until around 15 year-old and they are very sensitive to habitat changes, which means that their populations grow slowly. The tortoise’s overall population has long been declining and the Northern Corridor highway would fuel further decline in several significant ways.

The 4-lane highway would permanently restrict tortoises’ ability to migrate within the National Conservation Area, which could lead to the complete loss of local sub-populations. And while federal officials would attempt to gather up tortoises in the path of the highway and relocate them before bulldozers started rolling, the effort would largely serve as PR rather than preservation. Science has shown that re-located tortoises have very poor survival rates and other tortoises wouldn’t be found and would be crushed by heavy equipment during construction.

Utah’s Department of Transportation wants the public to believe the new highway is needed to reduce snarled traffic in rapidly growing St. George. But real-world experience shows us that any short-term reduction in traffic congestion provided by the Northern Corridor would hasten further sprawl around St. George, ultimately offsetting the short-term traffic benefits. And the Bureau of Land Management’s own environmental analysis identifies an alternative route that not only avoids the Red Cliffs National Conservation Area entirely but would be more effective at reducing traffic congestion in the long term.

September 10 is the deadline to tell the Bureau of Land Management to act in the best interest of public lands and threatened wildlife. Click here to ask the Bureau to reject Utah’s request for an unnecessary and harmful 4-lane highway through this desert tortoise stronghold.