Climate + Energy
#GreaterChaco, #JustTransition, #KeepItInTheGround
Santa Fe, NM—As President Biden takes office this week, a coalition is stepping up efforts to defend the Greater Chaco region from fracking and bolster support for environmental justice and a moratorium on selling public lands to the oil and gas industry

“The 42 oil and gas lease parcels we are contesting include lands in the Diné communities of Ojo Encino and Torreon,” said Robyn Jackson with Diné C.A.R.E. “Until the Bureau of Land Management meaningfully engages with Diné communities on the many health and environmental injustices that are directly attributable to oil and gas pollution and the Bureau’s slack oversight, these lease sales need to be stopped.”

The suit comes as President Biden and the new administration have pledged to ban new sales of public lands for fracking in order to protect the climate and assure equity and justice. The Trump administration’s sale of oil and gas leases in the Greater Chaco region underscores the need for ban. The leases at issue disproportionately impact the culturally significant Greater Chaco region and the Diné (Navajo) communities of Torreon and Ojo Encino.

“What’s happening in the Greater Chaco region underscores the need for President Biden to quickly follow through with his pledge to ban new oil and gas leasing and permitting on public lands,” said Rebecca Sobel, senior climate and energy campaigner for WildEarth Guardians. “For our climate and future, the injustice of fracking in Greater Chaco and across the American West must be stopped to ensure a just transition from fossil fuels.”

“It is both unethical and unlawful for the agency to ignore the inequities and injustices inherent to its oil and gas program,” said Ally Beasley with the Western Environmental Law Center. “These inequities and injustices are not incidental–they are structural, systemic, and part of a historical, ongoing pattern and practice of environmental racism, colonialism, and treatment of the Greater Chaco as an energy sacrifice zone. It has to stop.”

The suit targets the failure of the Trump administration’s Bureau of Land Management to acknowledge and address health and environmental justice impacts to Tribal communities and Indigenous interests.

“The Bureau continues irresponsible oil and gas leasing that cuts out public participation and any comprehensive analysis of what would transpire on the landscape and in communities when oil and gas development would occur,” said Mike Eisenfeld of San Juan Citizens Alliance. “There appears to be a definite pattern of agency indifference to upholding its responsibilities.”

“Today’s filing underscores the need to continue to hold the Trump administration’s Bureau of Land Management accountable for its repeated illegal actions to bypass thorough environmental reviews and cultural resource assessments, ignore public input, and sideline meaningful Tribal consultation in its oil and gas leasing program,” said Miya King-Flaherty with the Sierra Club – Rio Grande Chapter. “The Greater Chaco landscape continues to be desecrated and the environmental injustices must stop. We hope the new Biden administration will step in and protect this region.”

Today’s lawsuit, comes at a moment of reckoning with society’s deeply entrenched racial injustices in the U.S. and the world–injustices that are both illustrated and exacerbated by the COVID-19 pandemic. The lawsuit also comes as science increasingly supports winding down and ultimately phasing out fossil fuel production as a key strategy to confronting the climate crisis.

Ending the sale of public lands for fracking would also yield enormous health benefits. In addition to the industry’s climate impacts, the fracking science compendium released in 2020 by Physicians for Social Responsibility and Concerned Health Professionals of New York confirmed extensive health risks associated with oil and gas extraction, including cancer, asthma, pre-term birth, and more. 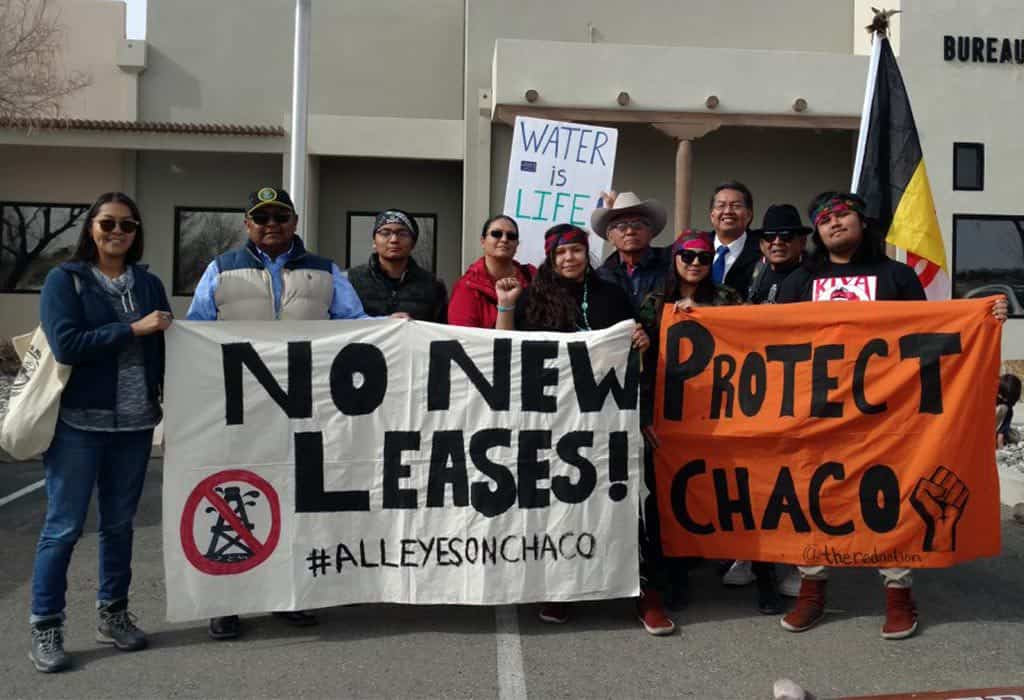