States have long relied on public advisory groups to help develop initial wolf plans and update existing plans. But livestock and hunting representatives on these panels outnumber and overpower scientists and organizations that are advocating for the full recovery and welfare of wolves.

Such advocacy groups are a better reflection of public sentiment. Polls have shown a majority of Americans opposed the removal of federal protection from wolves and want to see the species thrive.

State processes for wolf management plan development can produce plans that don’t reflect the most recent developments in science and best practices for wolf management. These plans may contain limits on wolf population size and range that science indicates are far below what is necessary for a recovered wolf population. Flawed state management has resulted in deadly consequences for wolves, especially evident since the loss of Endangered Species Act Protections for wolves throughout most of the country this year.

The groups developed separate editions for agencies and wolf advocates, and these include hyperlinks to a comprehensive resource bank that summarizes the scientific literature. The groups’ new stewardship approach emphasizes coexistence with wolves and asks state wildlife agencies to adhere to the following key principles:

“New wolf plans informed by science and ethics are needed now more than ever, as the disastrous winter wolf hunt in Wisconsin showed,” said Amaroq Weiss, senior West Coast wolf advocate at the Center for Biological Diversity. “With these planning guides and resources, which give new tools to people trying to help secure a future for wolves, we’re hoping to chart a more hopeful course in states’ stewardship of these beloved animals.”

“Too often when wolves lose their federal protections, states rush to open trophy hunting and trapping seasons that tear wolf families apart,” said Amanda Wight, program manager of wildlife protection at the Humane Society of the United States. “By focusing on coexistence and stewardship, these materials will help shift the paradigm away from killing wolves in response to hate and misinformation to developing wolf plans that are rooted in science, ethics and inclusivity.”

“In places like Colorado where wolf restoration is just beginning, these planning tools provide a foundation and an opportunity for both wildlife agencies and stakeholders to come together to learn from best practices in wolf management, and develop science-based wolf conservation plans,” said Lia Cheek, national field campaign director at the Endangered Species Coalition.

“These guides are designed to provide state agency professionals and advocates an invaluable roadmap in line with today’s best available science, ethical values and democratic principles,” said Jodi Habush Sinykin, a Wisconsin attorney with expertise in environmental policy retained by the Endangered Species Coalition for this project. “It is fortunate timing that these resources are available now to states like Wisconsin and Michigan currently launching efforts to update their states’ wolf-management plans.”

The Wolf Conservation Planning editions and Resource Bank were crafted by representatives from five conservation groups and a lead researcher. Outside experts who were consulted include scientists from academia with expertise in wolf biology, ecology, behavior, social science, ethics, philosophy, livestock-wolf conflict, and wolf hunting and trapping; Tribal members from the Great Lakes Indian Fish and Wildlife Commission; and staffers who currently or formerly worked for state or federal agencies on wolf recovery and conservation.

The new planning guides and resources are available here: https://www.endangered.org/wolf-conservation-planning/

Background: In May 2011 Congress stripped gray wolves of federal Endangered Species Act protection in the northern Rockies and parts of adjoining states. In January 2021, a Trump administration rule went into effect that stripped federal protection from wolves throughout most of the remaining contiguous states. In all parts of the country except the Southwest, state agencies now have full management authority over wolves.

Following federal delisting in 2011, Montana and Idaho immediately instituted wolf-hunting and/or trapping, aggressively increasing these measures in successive years. This year, following the federal delisting everywhere else, Montana and Idaho both enacted legislation or regulations that vastly expand when, where and how wolves can be killed, with goals to kill off up to 85% to 90% of their current populations.

Also earlier this year, Wisconsin held a winter wolf hunt that killed at least 20% of its entire wolf population in less than three days during the height of wolf breeding season. Currently, Wisconsin wildlife managers are preparing for another wolf hunt this fall informed by an outdated state wolf management plan from 1999. 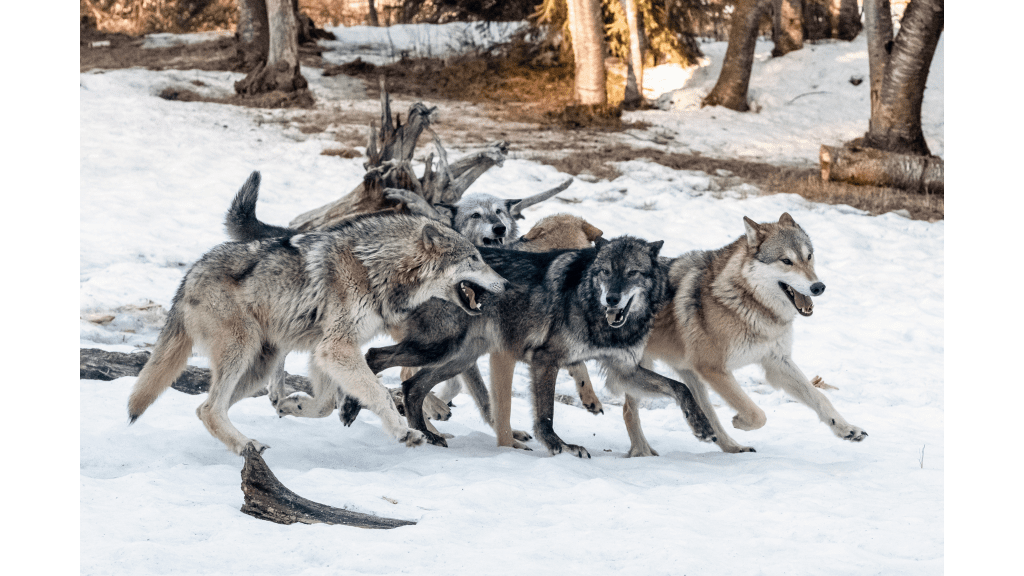