“It’s heartening to see that, once again, the courts have struck down the Trump administration’s shortsighted rush to frack public lands to fuel the climate crisis,” said Rebecca Fischer, climate and energy program attorney with WildEarth Guardians. “The science has never been clearer that we need an immediate transition away from dirty fossil fuels, and the federal government should be leading the way, not living in the Dark Ages.”

In a 35-page ruling, Judge Brian Morris held the U.S. Department of the Interior’s Bureau of Land Management violated federal law when selling oil and gas leases underlying the state’s public lands in 2017 and 2018.

Judge Morris held the agency illegally ignored the impacts of oil and gas extraction to groundwater and to climate change, as well failed to consider alternatives that were more protective of health and the environment.

The judge overturned the Bureau of Land Management’s decisions and “vacated” the leases, meaning they no longer legally exist.

Rural landowners and conservation groups, including WildEarth Guardians and Montana Environmental Information Center, banded together and filed suit in 2018 to block the Bureau of Land Management’s sale of 145,063 acres of Montana public lands to the oil and gas industry.

Represented by Earthjustice and the Western Environmental Law Center, the groups targeted the Trump administration’s failure to disclose the impacts of fracking on Montana’s water quality, water quantity and our climate.

“We know from experience what drilling for oil can do to productive farmlands. When a pipeline leaked into the Yellowstone River and they had to truck the oil out of Elk Basin, we did not have a fruit crop that year. The dust from all the oil trucks on the road blanketed our fruit trees and rocked our farm’s finances. We could only imagine what this latest rushed lease sale was going to do to us,” said Bonnie Martinell, who together with her husband Jack, are generational Montana farmers who own and operate a chemical free produce and hay farm just north of Elk Basin oil field. “We’re incredibly grateful that the court sided with the longtime rural landowners, protecting the water in our wells and our community’s future.”

“Oil and gas development comes with a cost — to groundwater, to infrastructure, and to rural economies. We feel this acutely along the Beartooth Front, as increasing temperatures and drought make water for ranching and farming scarce,” said David Katz, a Montana landowner whose family has owned property along the Beartooth Front on the Stillwater River in Stillwater County for 45 years. “The profits from these leases would have been relatively small for oil companies, but the long-term impacts on the Beartooth Front community would have been devastating. Today’s decision from the court marks a good day for us in southern Montana.”

The lands sold by the Bureau of Land Management included almost 100,000 acres in the iconic Tongue River Valley of southeastern Montana and 26,000 acres near Livingston, Montana, the Gateway to Yellowstone National Park, the Beartooth Front of south central Montana, and lands next to the Upper Missouri River Breaks National Monument.

Click here to see a map of the lands involved >>

“The oil rush on Montana’s public lands put generational rural landowners at risk of losing clean water and the sustainability of their communities.” said Elizabeth Forsyth, staff attorney at Earthjustice.  “The Bureau of Land Management was well aware that current oil and gas drilling practices would not protect sources of drinking water in these Montana communities, but rushed the sale anyway. Justice won in Montana today.”

“Montana’s public lands, waters, and climate were put at risk by an agency looking to cut corners and do the bidding of the fossil fuel industry instead of the public. We’re thankful the court has put the brakes on this reckless behavior but we know this is not the end of the attacks on public resources,” said Anne Hedges, Deputy Director of the Montana Environmental Information Center. “The Trump administration has not seen a section of public land that it didn’t want to sell to the highest bidder. Montanans must remain vigilant if we want to keep public lands that current and future Montanans can enjoy.”

“The Trump administration’s lust for energy dominance at the expense of people and the environment has, fortunately, hit another brick wall,” said Kyle Tisdel, attorney with the Western Environmental Law Center. “This is another major win for our climate, while protecting almost 150,000 acres of public lands from industry exploitation.”

In 2018, scientists with the Department of the Interior released an assessment of greenhouse gas emissions from the production and consumption of fossil fuels from public lands. The report found these emissions, which come from federal coal, as well as offshore and onshore oil and gas, accounted for nearly 25 percent of all U.S. climate pollution.

State and federal scientists have made it clear in the Montana Climate Assessment and Volume II of the Fourth National Climate Assessment, that the costs of climate change to Montana and the U.S. is significant and alarming. The National report called for “immediate and substantial global greenhouse gas emissions reductions” to prevent the most catastrophic impacts of climate change.

Today’s court win is the latest to overturn the Trump administration’s attempts to sell public lands for fracking in the western U.S. In March 2019, a federal court rejected the Bureau of Land Management’s sale of more than 300,000 acres in Wyoming and earlier this year, an Idaho judge overturned the sale of nearly one million acres in Nevada, Utah, and Wyoming. 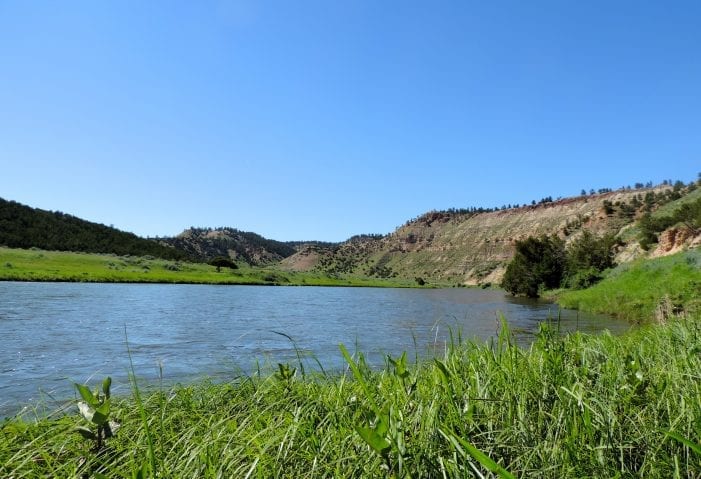 The Tongue River Valley in Montana. Photo by WildEarth Guardians.