#ClimateJustice, #FrackOffChaco, #KeepItInTheGround, #PressStatement
In response to legal action from a coalition of organizations, the Biden administration today agreed to review the Trump administration’s illegal approval of fracking on nearly 45,000 acres—70 square miles—of the Greater Chaco region of northwest New Mexico and to reconsider whether to authorize oil and gas extraction on lands exceptionally sacred to Diné people (court order granting stay here).

“Diné C.A.R.E views this latest settlement agreement as a sobering reminder of the lengths local Diné communities must go to advocate for environmental justice within the Greater Chaco Landscape,” said Diné C.A.R.E. Greater Chaco Energy Organizer Mario Atencio. “The Bureau of Land Management’s fly-by-night approvals for oil and gas leasing during the pandemic chaos of the waning days of the Trump administration undermines the trust responsibility the Bureau has with Diné living on the Counselor, Ojo Encino, and Torreon lands. The Sisnaateel Mesa Complex is highly sacred for the Diné, and it should not come to threatening federal court actions for the federal agencies like the Bureau to consider the adverse effects its oil and leasing bonanza is having on lands in the Greater Chaco Landscape. Somewhere, the Bureau administration needs to come into alignment with the Justice40, the ‘Honoring Chaco Initiative,’ and other executive orders that are supposed to bring environmental justice to the Diné.”

In January 2022, the groups asked a federal judge to halt all drilling, based on the Trump administration’s illegal approval of the oil and gas leases. In response, the Biden administration has finally agreed to reconsider.

The agreement pauses oil and gas extraction activities on the oil and gas leases while the U.S. Department of the Interior’s Bureau of Land Management reviews the leasing.

In addition, the agreement requires the Bureau to engage in significantly enhanced Tribal consultation and public meetings, including with local leaders and Navajo chapter houses, and to perform specific cultural analysis of these sacred lands.

Oil and gas company EOG, formerly called Enron, will not develop in any way the 119 wells for which it holds Bureau approval to drill as we await a new agency decision.

The leased lands include the sacred Sisnaateel Mesa Complex, which is central to the Diné cosmology and akin in importance to Jerusalem, Mecca, or the Bodhi Tree in India. The Bureau has agreed not to approve any new wells, roads, or pipelines as it reconsiders the Trump administration’s illegal leasing.

After this process, the Bureau will issue a new decision on these leases—again exceedingly sacred to Navajo people—including the possibility of revoking them. We encourage this action as for these places, “too special to drill” is a vast understatement.

Today’s agreement comes as Secretary of the Interior, Deb Haaland, last year launched the “Honoring Chaco” Initiative, a process to both protect a 10-mile buffer around Chaco Culture National Historical Park and to develop a landscape-level plan to protect the region’s irreplaceable cultural values.  Groups have called on Interior Secretary Haaland to pause oil and gas leasing and drilling as the Honoring Chaco Initiative unfolds.

The agreement is also concurrent with science, namely this February’s Intergovernmental Panel on Climate Change, calling for rapidly winding down and ultimately phasing out fossil fuel production as a key strategy to confronting the climate crisis.

“We are hopeful the Bureau of Land Management will reconsider its decisions to ignore the inequities and injustices inherent to its oil and gas leasing program in Greater Chaco,” said Ally Beasley with the Western Environmental Law Center. “This case provides an opportunity for the Bureau to correct one example of its systemically unjust treatment of Greater Chaco as an energy sacrifice zone. A new decision—and new decision-making process—for these leases could be a meaningful step toward truly ‘honoring Chaco’ as the agency has alluded to.”

The Bureau’s inadequate public participation process for these leases fell far short of the “fair treatment and meaningful involvement” that environmental justice demands – an important consideration because these leases impact the Greater Chaco region and the Diné communities of Torreon and Ojo Encino. The majority of available lands within the Greater Chaco region are already leased for oil and gas development with more than 40,000 wells existing in the area.

“If President Biden and Interior Secretary Haaland are serious about honoring the Greater Chaco region, then they’ll cancel these illegally approved oil and gas leases,” said Rebecca Sobel, organizing director for WildEarth Guardians. “Much more needs to be done to truly honor the Greater Chaco Landscape, and the impacts from unchecked fracking across increase every day the administration fails to take action.”

“The Department of the Interior can no longer blindly lease lands for oil and gas in Northwestern New Mexico,” said Mike Eisenfeld of San Juan Citizens Alliance.

“We are cautiously optimistic that the Biden administration is taking steps to address some of the unlawful oil and gas exploitation afflicting Greater Chaco, its people, and its sacred places,” said Miya King-Flaherty with the Sierra Club – Rio Grande Chapter. “We hope the Biden Bureau of Land Management follows through on the sentiment of ‘honoring Chaco’ by pulling back these and more leases in places that have been historically treated as sacrifice zones for energy development.” 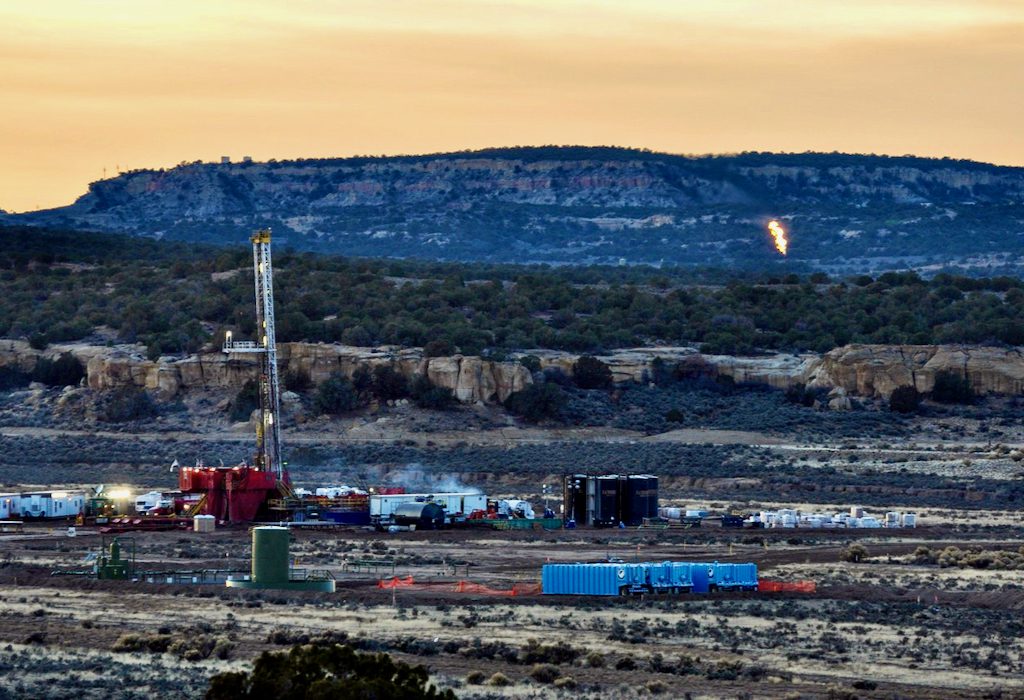 Fracking and flaring in the Greater Chaco. Photo by Mike Eisenfeld.