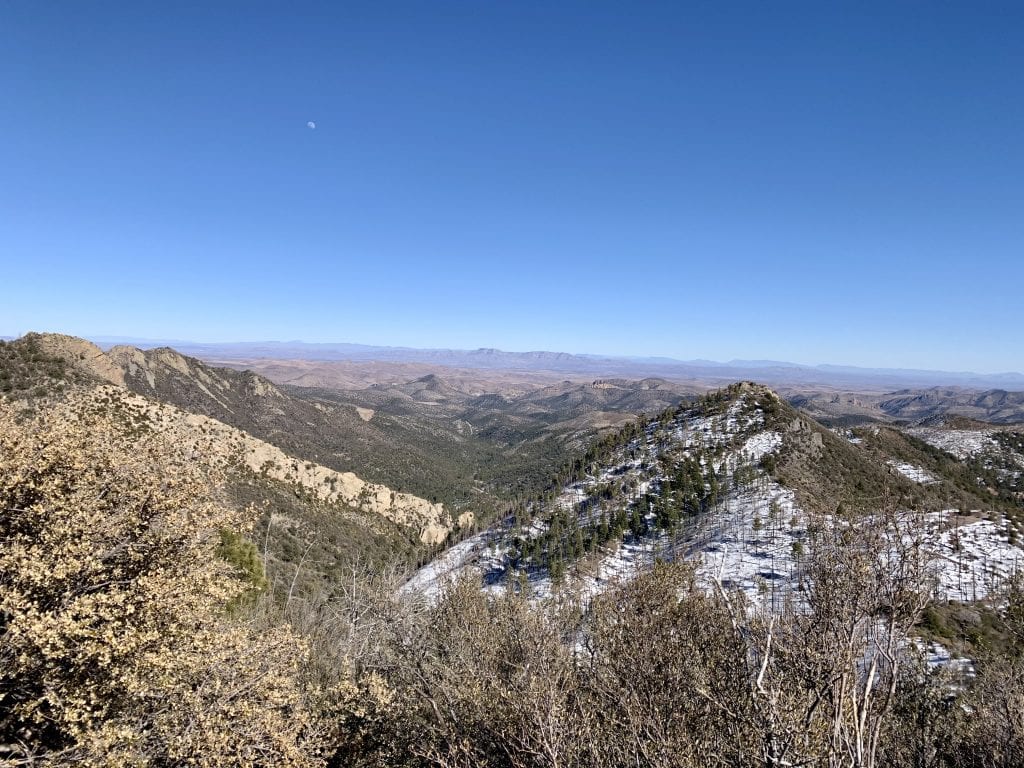 Meditations from the Greater Gila

On the possibility of wolves, the actuality of dark skies, and actualizing the possible

i.
On the possibility of wolves

Everywhere in the Gila, there’s the possibility of wolves. I wake early. The thermometer in the rental car reads 15 degrees. A flock of dark-eyed juncos, earlier risers, flit about in the frozen grass, indifferent to my stomps and claps as I attempt to return feeling to my hands and feet. It’s the middle of February in the San Francisco mountains. And there’s the possibility of wolves.

I park at a deserted trailhead. A sign posted at the informational kiosk offers a $35,000 reward for any tips that might lead to the poachers who recently killed two wolves. The total population of Mexican Gray Wolves in the United States teeters just above 180. The odds aren’t good. And still, there’s the possibility of wolves.

I wander beneath leaning ponderosa pines. Their red bark comes to life in the cold morning light. My boots crunch through the crusted snow and my mind whirs with all the chatter of so many human dilemmas. How do we protect this place? How do we negotiate so many human agendas? How do we face the megadrought? Save the Chiricahua leopard frog? Reintroduce the jaguar? Practice healthy fire habits? How do we include the voices of those who have deep ancestral ties to this landscape? How do we practice a more equitable and just conservation?

Movement. My body knows it almost before my brain does. I freeze. Silence. A loping shape. And then another. They pause in unison. Look my way. Then continue northeast. Intentioned but not rushed. Their bushy tails waving along behind them as they disappear behind a rocky outcropping. They’re wolves. In all their precarity. In all their possibility.

ii.
On the actuality of dark skies

Everywhere in the Greater Gila there’s the reality of dark sky sanctuaries. I spend the long, late winter nights with head dropped back and mouth agape. These star-spangled firmaments reel me into the small, sacred space of Earth. And they cast me out into the depths of the yawning universe.

These most hallowed, ancient, original maps of the cosmos fade into the blur of so much light and noise and human unawareness. To be grounded in space and time by some infinite number of pricks of light both near and far and then and now, is to tap into a human orientation as old as the impeccable stone masonry of the Gila Cliff Dwellings, the black and white sherds of a Mimbres pot, the evocative howl of the wolf. The Mogollon Mountains arch into the high desert darkness. Everywhere in the Gila there’s the actuality of dark sky sanctuaries.

One of the more vocal sources of opposition to increased light pollution are Indigenous communities whose cosmologies largely revolve around the stars and their ever-shifting place in the sky. One scholarly article even refers to our “whitening skies” as a form of cultural genocide. The night sky binds us to our ancestors. It carries all the imaginings of every human who ever gazed upon it in awe. That the Greater Gila offers a darkened sanctuary for the stars is just another reason why we long to protect it. It roots us to ourselves as much as it roots us to the world from which we came. We must cherish it and keep its dark skies dark and full of wonder.

iii.
On actualizing the possible

A landscape full of cantering lobos gracefully poised against a reeling backdrop of peerless darkened star-swept skies inspires dreams. It inspires big bold visions of restructured cultural values and governments that prioritize resilience and well-being for all human and more-than-human communities. It stirs a sense of belief in a harmonious co-existence, where the roots of our ecological codependency grow respect and a commitment to nurture and sustain, rather than compete and out-perform. This is not a Pollyanna, pie-in-the-sky abdication of the need to face the complex cluster-of-a-reality that is our current historical moment. I don’t know that we have the innate prosocial, biophilic tendencies required to reroute ourselves on a path to salvation. Practicality and pragmatism are key ingredients for meaningful change.

AND seeding ourselves in the midst of all we have to lose, lodging our bodies in the center of an expanse of wildness that stands to suffer and shrink if nothing is done, is a potent means of galvanization. Places like the Greater Gila stir our souls and break our hearts and that’s why we love them and need them and fight relentlessly to protect them. They are the hallowed ground where we are reminded of what’s at stake. And also reminded of all that’s possible and all that’s actual and how the former can become the latter and why we must commit to making it so.