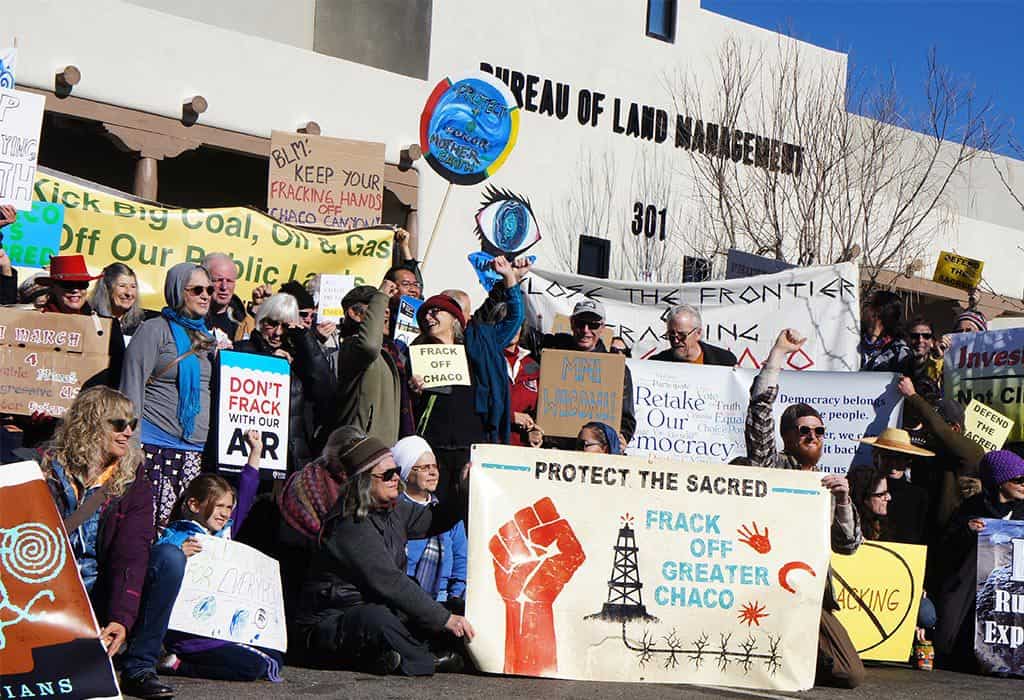 Trump to Indigenous leaders: Screw you!

The Bureau of Land Management continues to rubber-stamp fracking in Greater Chaco, effectively flipping the bird toward the Navajo Nation and the Pueblo Tribes of New Mexico.

In 2017, the Navajo Nation and the All Pueblo Council of Governors made a straightforward request of the U.S. Bureau of Land Management: place a moratorium on fracking in the Greater Chaco region of northwestern New Mexico.

How has the Bureau of Land Management responded since that request was made? It’s continued to rubber-stamp more fracking, letting the oil and gas industry run roughshod over this sacred landscape. This March, the agency is even planning to auction off more than 4,400 acres of public lands for fracking within miles of Chaco Canyon, the heart of the Greater Chaco region.

Put another way, the Bureau of Land Management is effectively flipping the bird toward the Navajo Nation and the Pueblo Tribes of New Mexico.

If you didn’t know, the Greater Chaco region of northwestern New Mexico is the cultural core of the American Southwest. Centered by Chaco Culture National Historical Park, a World Heritage Site, the region spans nearly 8,000 square miles. More than a thousand years ago, the Ancestral Puebloan Chaco civilization thrived here.

Greater Chaco: home to thousands of years’ worth of history, and also to present-day Indigenous communities.

Today, Chacoan ruins still stand on the landscape and Indigenous communities persist. The modern-day Pueblo in New Mexico still maintain close ties to the region and over the last 600 years, the Navajo have settled the land.

In 1968, the Nixon administration declared the area an “energy sacrifice zone,” ushering in an era of unchecked fossil fuel development. But the latest threat from horizontal drilling and fracking of the Mancos shale, which underlies virtually all the region, is beyond what has ever occurred here.

Since 2010, hundreds of new oil and gas wells have been drilled and fracked in the vicinity of Chaco Canyon. Some of these wells are within miles of the National Historical Park—an area the Bureau of Land Management has in the past promised not to sacrifice to the oil and gas industry.

Fracking infrastructure visible just beyond a sign for the Historical Park.

Now, the Bureau of Land Management is breaking its promise and opening the door for a flood of new fracking at Chaco’s doorstep. And while the region’s land, air, and water stand to suffer tremendously, it’s the region’s Indigenous communities, including Navajo residents who live in the Chaco Canyon area and present-day Pueblo communities with Chacoan roots, who are being completely disregarded. The consequences have been disastrous.

The Dangers of Fracking

From a massive well explosion near peoples’ homes, to a surge in air and water pollution, to widespread threats to the cultural integrity of the Greater Chaco region, Indigenous residents in the region have suffered greatly from fracking’s expansion.

The Bureau of Land Management has acknowledged it currently lacks an adequate plan to protect people and public lands from this surge in oil and gas development. Yet it keeps selling land for fracking and approving more drilling.

So what’s next for Greater Chaco? One thing’s for sure: we can’t treat our heritage sites this way, and we certainly can’t treat our fellow Americans this way. As President Trump and the Bureau of Land Management continue to put the profits of the oil and gas industry before Tribal and American public interests, the opposition is only going to grow and intensify.

At a rally in January 2017, more than 150 people gathered to protest a BLM lease sale of lands in Greater Chaco.

For the first time ever, the Navajo Nation and All Pueblo Council of Governors have joined forces to oppose more drilling and fracking in the Chaco region. The New Mexico legislature is also urging protection of Greater Chaco and its people. Most recently, New Mexico’s Congressional delegation, including U.S. Senators Tom Udall and Martin Heinrich, called on the Bureau of Land Management to cancel its plans to auction more public lands for fracking.

At the same time, a growing and diverse number of organizations, including Diné Citizens Against Ruining Our Environment, Tewa Women United, San Juan Citizens Alliance, New Energy Economy, Great Old Broads for Wilderness, and others, are uniting under the Frack Off Chaco Coalition.

Together, we’re leveraging legal pressure, building political support, and mobilizing people power to defend the Greater Chaco region and resist the oil and gas industry’s push to defile this landscape.

We’re also joining forces to push for a full economic transition from fossil fuel dependence in Greater Chaco. With dozens of other organizations, we’re pushing for legislation to help unshackle communities who are forced to depend on oil, gas, and coal, and to open the door for more sustainable and prosperous economies.

While President Trump and the Bureau of Land Management are breaking their promises and thumbing their nose at Indigenous leaders, the resistance is only growing stronger.

For more news and commentary on Greater Chaco and tackling climate change in the American West, visit Climatewest.org.