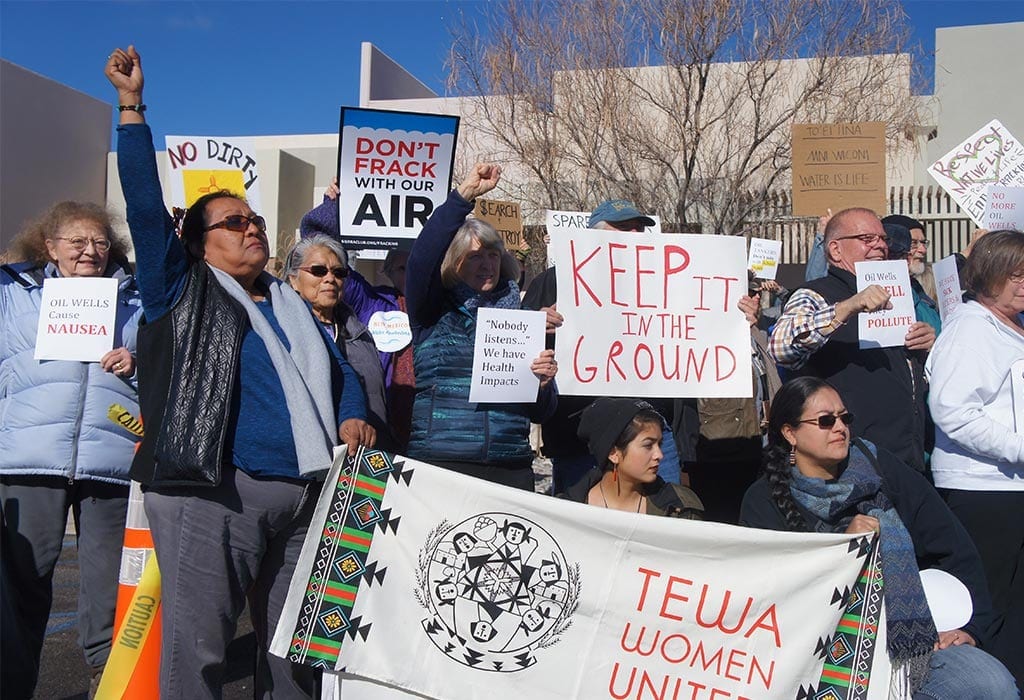 Next steps on the road to protecting Greater Chaco

As we previously showcased, WildEarth Guardians has been challenging Trump and Zinke’s platform of “energy dominance” at every turn, and, because of our strategic combination of building power from the ground up and top down, we’re winning.

Our Frack Off Greater Chaco campaign and its growing coalition prove the power of culminating intense grassroots organizing with sound legal and policy efforts.

It’s been a long road to get here, and we still have a long ways to go.

When we launched our lawsuit three years ago, we knew it would take more than solid legal claims to secure the necessary protections this sacred landscape and its people deserve.

For too long, the Bureau of Land Management Farmington Field Office has been in the pocket of oil and gas, rubber-stamping development lacking any plan for environment and public health safeguards. Now, the Four Corners region is home to the nation’s largest methane cloud the size of Delaware and people are finally ready to confront the rampant environmental injustice and the impacts of fracking.

When Senator Udall told #FrackOffChaco allies, ‘This victory is yours,’ we knew he was right.

BLM admits to never analyzing impacts of industrialized fracking and is currently amending its resource management plan in response. Yet, BLM continues leasing public and tribal lands for fracking and has approved more than 500 wells despite protests and without meaningful Tribal consultation or analysis.

Since 2011, we’ve visited Chaco countless times and documented the invading industrialization across the Greater Chaco Landscape as BLM began approving illegal and industrial-scale fracking in the area. We joined dozens of meetings with impacted community members across the Tri-Chapter area of Eastern Navajo Nation and listened to countless requests of citizens that BLM heed the call to stop fracking.

We sent letters (and more letters). And, we knew letters weren’t enough. We’ve rallied many times in front of the Bureau of Land Management offices – in Farmington, Albuquerque, Santa Fe, and in Roswell, New Mexico.

We continue to challenge BLM’s oil and gas leasing program and every step the agency takes to sacrifice more public land for fracking.

We’ve helped facilitate record-breaking protest comments opposing new oil and gas development in Greater Chaco. We’ve taken our call to the state legislature in New Mexico, the state capitol in Denver and to the nation’s capital in Washington D.C.

Time after time, we called on decision makers to #FrackOffChaco and #KeepItInTheGround.

When our state and federal agencies failed us, we called on our elected officials to intervene. We delivered many letters and more than 165,000 comments to New Mexico Senators Tom Udall and Martin Heinrich demanding bold leadership.

So, when Zinke canceled the New Mexico oil and gas lease sale earlier this month and Senator Udall told #FrackOffChaco allies, “This victory is yours,” we knew he was right.

At every step of public engagement, WildEarth Guardians and #FrackOffChaco have been supporting commonsense protections and uplifting the calls from the Navajo Nation and All Pueblo Council of Governors, National Congress of American Indians, 15 Navajo Chapter Houses, the New Mexico House Legislature, and more than 400,000 public citizens for a moratorium on drilling in Greater Chaco until the new resource management plan is complete.

Still, Department of Interior Secretary Ryan Zinke and Trump’s Bureau of Land Management are relentless in their efforts to “dominate” our public lands, sacrificing public health for private profit. Despite countless protests from communities and tribal leadership, attacks on our sacred landscapes, our health, our water, and our history continue with each new well and acre sacrificed to oil and gas leasing.

We will continue the fight for what’s right and to protect all that is sacred. From the top down and the bottom up, we will work to assure Greater Chaco protections, including these four points and progress toward just transitions:

There’s more work ahead. Despite the cancellation of the 4,434-acre lease of oil and gas parcels north of Chaco Canyon in New Mexico, Secretary Zinke and BLM continue their assault on Indigenous rights and our cultural history throughout the Four Corners states by auctioning off more than 51,000 acres in southeastern Utah for fracking.

At least 10 Chaco Great Houses are within two miles of these Utah parcels, including at least two Great House sites within the lease boundaries and at least four prehistoric road segments adjacent to or within the parcels. These sites demonstrate the Chaco culture’s powerful reach across a vast region the size of Ohio, crossing modern state borders and jurisdictional boundaries. They also alert us to the strong likelihood that there are more ancient roads and ceremonial Great Houses within this area.

It’s clear protection of the people and places of Greater Chaco requires new and innovative landscape-level management that includes the diversity of voices fighting for justice. We hope to see you on the frontlines.

For more images and information, read the original blog post at ClimateWest.org.

Highway construction is the antithesis of conservation