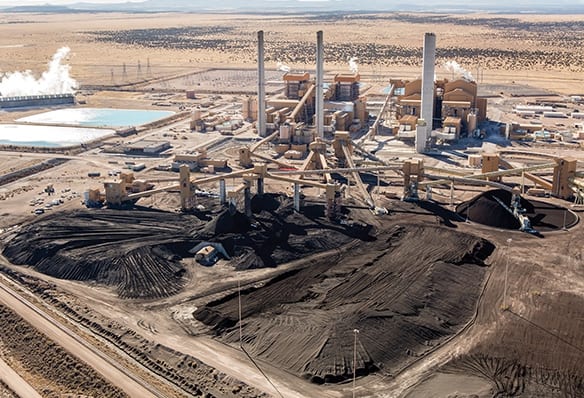 UPDATE: Moody’s just released a companion report highlighting not only the increasing economic risks associated with coal-fired power plants operated by western rural electric cooperatives, like Tri-State Generation, but also the incredible opportunities to transition to renewables in the wind and solar-rich American West. Read more at Clean Cooperative >> 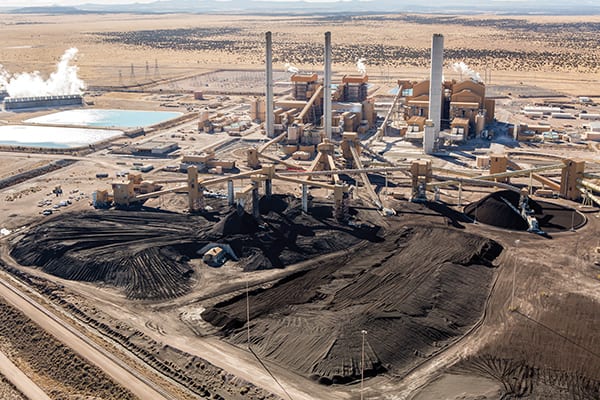 Tri-State Generation and Transmission and Salt River Project, two large electric utility cooperatives in the American West, own units 3 and 4, respectively, of the Springerville power plant in Arizona. Although these units were built in 2006 and 2009, respectively, they now cost more to operate than it would cost to build new renewable energy.

More to the point, in their report, Moody’s acknowledged that renewables are simply more affordable than coal plants producing at this rate.  Here’s what they say:

“Plants that are greater than $30/MWh are more expensive than long-term purchase power agreement (PPAs) for utility-scale renewables and renewable-plus-storage projects in some parts of the country. For example, the national average levelized price of wind PPAs is $20/MWh, and a few utility-scale solar PV PPAs have been priced as aggressively as $30/MWh (all inclusive of federal tax credits). Renewable plus storage projects are now also setting lower benchmark prices, including a recent request for proposal (RFP) median bid of $21/MWh for wind-plus-storage in Colorado.”

The costs of Tri-State’s plants are notable in that half cost more than $35 per megawatt-hour. One, the Springerville 3 unit, which began operation only in 2006, costs more than $36.  To put that into perspective, that’s twice the cost of building and generating power from new wind.  Here’s the breakdown of Tri-State’s costs from Clean Cooperative:

The report is just the latest bombshell indiction that Tri-State, which provides power to 43 co-ops in the states of Colorado, Nebraska, New Mexico, and Wyoming, is giving its members a raw deal.  And it’s the latest indication that, in spite of some moves toward renewable energy, the company’s significant investments in fossil fuels are destined to bring Tri-State nothing but financial ruin.

But the Moody’s report, which WildEarth Guardians also obtained, paints an even grimmer picture for coal-fired power plants owned by other municipal and cooperative utilities in the American West.

As the report notes, 72.3% of coal-fired power plants owned by municipal or cooperative utilities are “at risk” because their costs are higher than $30 per megawatt-hour. Of these, 10 are located in the western U.S.  And while they include Tri-State’s power plants, they also include power plants owned by Salt River Project and Colorado Springs Utilities.

The Martin Drake plant, which WildEarth Guardians has been confronting, also has the sad distinction of having the lowest capacity factor of any municipal or co-op coal-fired power plant in the western U.S.  At 46.6%, it means the power plant not only costs a lot to operate, but that Colorado Springs Utilities is getting less than half of the plant’s generating capacity. 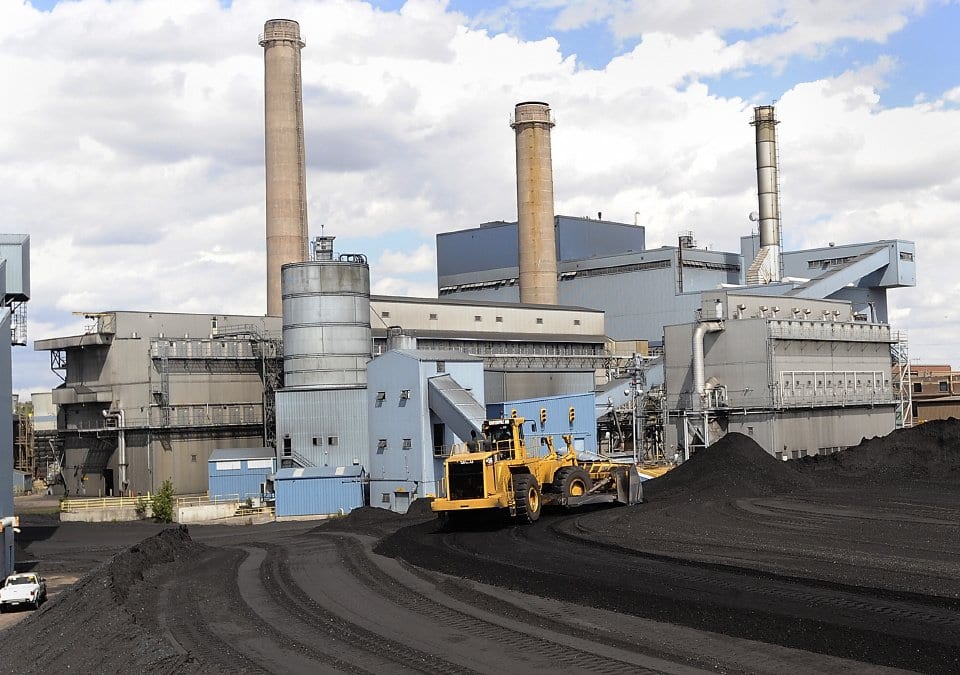 It quite literally means that for every dollar spent generating power at Martin Drake, customers are getting less than half of what the plant is capable of generating. That would be like paying full price for a new V8 truck, but only getting a rig with four workable cylinders.
Below is an excerpt of the data from the Moodys’ report for the western power plants: 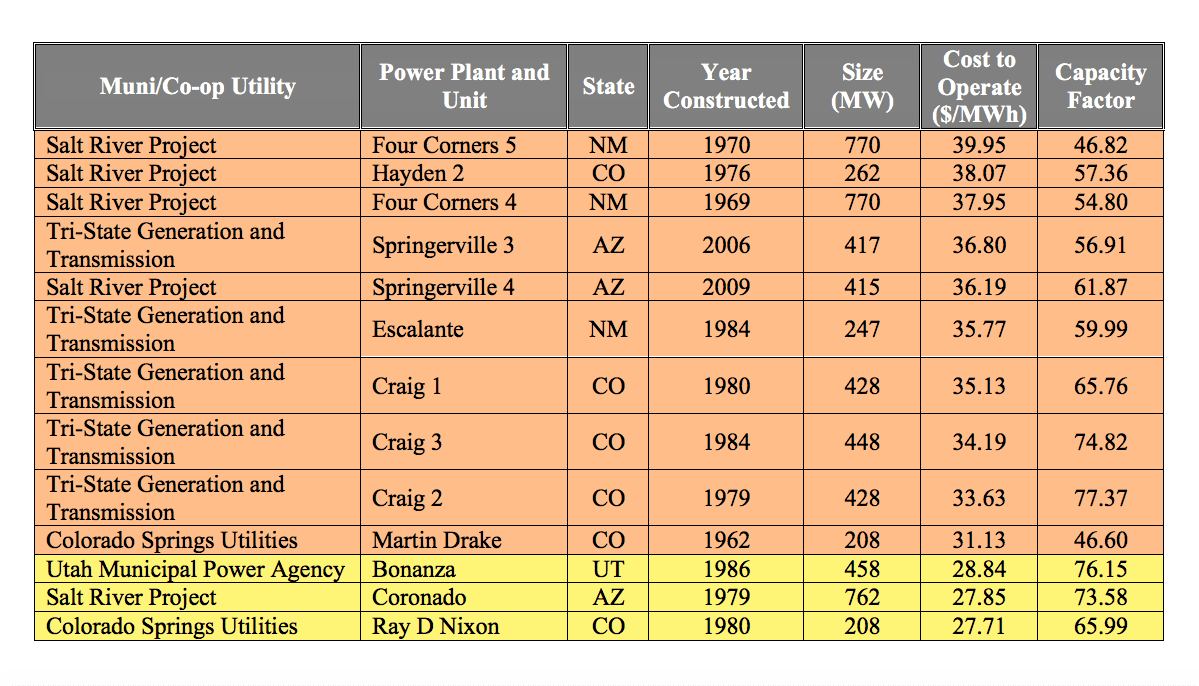 The report shows that many coal-fired power plants operated by municipal and co-op utilities in the American West are no longer worth it. And it means that their owners, including Tri-State, Salt River Project, Colorado Springs Utilities, and Utah Municipal Power Agency, should shut them down, instead invest in renewables, and start saving themselves and their customers some major money.

Unfortunately, that’s not happening. With the exception of Tri-State’s Craig unit 1, not a single coal-fired power plant on the list above is slated to shut down any time in the near future.

In their report, Moody’s nails the reason why, explaining:

The unfettered ability of municipal utilities to set their own rates is a significant risk mitigant. With some exceptions, most G&T [Generation and Transmission] cooperative and their distribution cooperative customers also have this ability.

In other words, because municipal and co-op utilities have an “unfettered” ability to set rates and recover costs from their customers, they can continue to justify operating their costly coal-fired power plants.  That’s disturbing.

However, in spite of Moody’s assessment, recovering rates is absolutely not a sure thing for municipal and co-op utilities. As has been reported, rather than suffer the prospect of rising costs, some members of Tri-State are now talking about divorcing themselves from the co-op.

Already, one co-op member of Tri-State (now former member), Kit Carson Electric, managed to buy itself out of its Tri-State contract in order to avoid rising costs and start investing in more affordable renewable energy.

And the reality is, if costs get too high, customers of all these utilities will start defecting. As customers leave, costs will only rise, thus initiating the same “death spiral” that’s taken down other similar utilities in the past.

The writing is on the wall that coal is no longer worth it. With this latest Moody’s report, we have yet another data point showing that in the American West, investing in renewables just makes more economic sense.

For the region’s municipal and cooperative utilities, now is the time to transition. If they don’t, their customers, including their members and their citizens, stand to suffer greatly from the cost of unaffordable power.