This insect has a striking appearance with its pinkish-white wing cases, metallic green head and accents, huge eyes, and legs covered with white hairs. Like other tiger beetle species, Coral Pink Sand Dunes tiger beetles have large, powerful mandibles with which they attack and eat prey, generally other insects. At night they bury themselves in the sand dunes from which they get their name.

The dunes that Coral Pink Sand Dunes tiger beetles inhabit cover 3,500 acres, 2,000 acres of which are within Coral Pink Sand Dunes (CPSD) State Park. The remaining 1,500 acres are on adjacent Bureau of Land Management land. The tiger beetle occurs consistently in only two populations, which occupy a total area of only about 500 acres in size. The northern population may not be self-sustaining, instead relying on dispersal from the central population.

What are the threats to the Coral Pink Sand Dunes tiger beetle?

Drought is one of the major threats to this rare beetle. Rainfall is one of the primary factors controlling the beetle’s population size, which tends to fluctuate dramatically from year to year. Drought sucks the moisture from the soil, reducing the size of the beetle’s already limited habitat as well as reducing the populations of its prey insects. Climate change may exacerbate the impacts of drought in years to come. It would likely help the beetle survive the coming years if its whole range was protected, so that its population could freely expand and move from place to place along with the movement of the dunes, which are constantly shifting in unpredictable ways. But this is not the case.

Though core areas of tiger beetle habitat have been closed to off-road vehicles (ORVs) since 1997 (207 acres within the CPSD State Park and 370 acres on BLM land), ORV use still occurs in 52 percent of occupied tiger beetle habitat in the central population in the state park, as well as in the dispersal corridor between the two populations. For the small northern population, enforcement of protections on BLM land is minimal and relies mainly on voluntary compliance. ORVs, aside from crushing adult beetles, can damage vegetation, reducing the beetle’s prey base and drying out its habitat even further. During years when their population is small, the beetles concentrate in the protected area in CPSD State Park. In years when beetle numbers are exceptionally high, a greater percentage of them are found outside the conservation areas, where they are vulnerable to harm from ORVs.

The U.S. Fish and Wildlife Service recognized the ongoing threats to the species by proposing to list it as “threatened,” but withdrew the proposal based on future conservation actions and management plans. We will continue to advocate for this tiny, fierce creature until it is assured a safe haven.

Below: ORV tracks in the sand dunes. Photo by Chris Wirth. 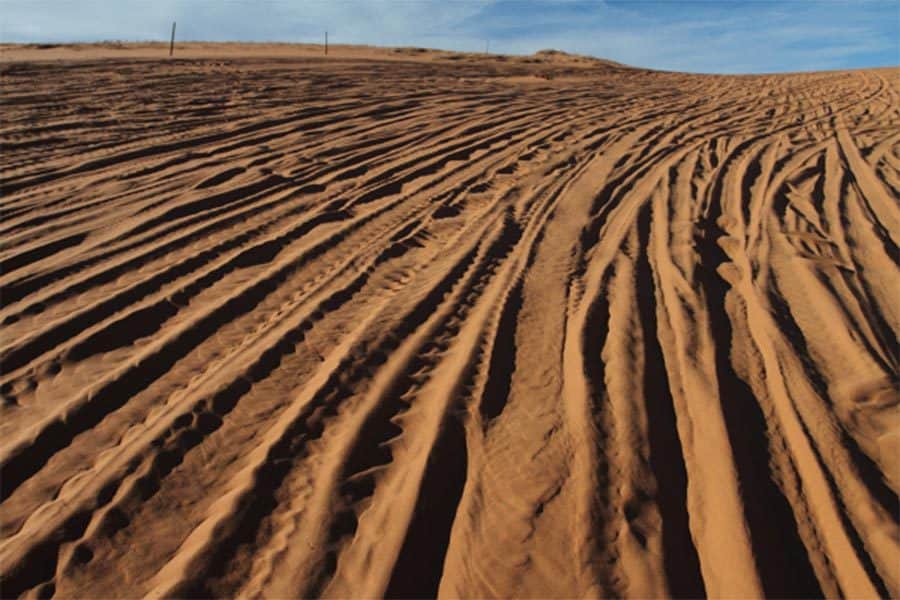