Rivers, Wildlife
#EndangeredSpeciesAct, #ForceForNature, #LivingRivers, #ProtectWhatYouLove, #RethinkRivers, #StopExtinction
WASHINGTON—In an effort to protect living rivers and stop extinction, WildEarth Guardians submitted comments this week on the U.S. Fish and Wildlife Service’s latest attempt to limit habitat protections for the western yellow-billed cuckoo. On February 27, 2020, the Service released its revised critical habitat designation for the cuckoo, which dropped 30 percent of the habitat included in the original rule it proposed in 2014 and also identified vast exclusions for consideration especially in states like Colorado, Nevada, Wyoming and Texas, where populations are in greatest danger of disappearing.

“This is a shady attempt to backpedal on the original proposal for critical habitat,” said Jen Pelz, Rio Grande Waterkeeper and director of the rivers program at WildEarth Guardians. “The yellow-billed cuckoo is an iconic bird of western rivers, and protecting their habitat would protect healthy watersheds and clean water; too bad the Trump administration isn’t interested in things like that.”

In its 2020 revised rule, the Service proposes to designate 493,665 acres of critical habitat for the yellow-billed cuckoo in Arizona, California, Colorado, Idaho, New Mexico, Texas and Utah. The Service eliminated outright approximately 164,248 acres from the original 2014 designation. Guardians identified in its comments 31 of the original units (approximately 142,084 acres) that were excluded.

“The unexplained exclusions and lack of transparency and clarity in the revised rule is concerning,” said Taylor Jones, endangered species advocate for WildEarth Guardians. “This looks like another attempt by the Trump administration to elevate the needs of extractive industries over the needs of healthy wild rivers.”

The group’s comments also highlight that 30 percent (145,710 acres) of the 2020 revised critical habitat designation (493,665 acres) are being considered for exclusion from the final designation. Some of the purported reasoning behind these exclusions, includes that the lands are managed by the state, are subject to conservation easement, are located along the U.S./Mexico border, and are part of federal water resource projects.

“This Administration is attempting to shelter the very industries that brought the yellow-billed cuckoo to the brink in the first place,” added Pelz. “Let’s be clear, federal water projects—that control the timing of river flows and ability of rivers to meander across their floodplains—are largely responsible for the bird’s decline and should be part of the solution, not merely exempt from the effort.” 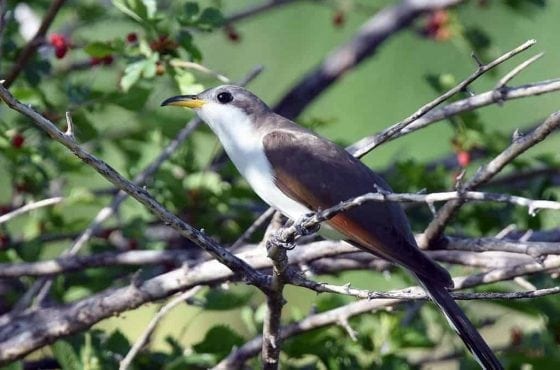 The western yellow-billed cuckoo is a migratory bird that travels between its wintering grounds in South and Central America and its breeding grounds in the United States and Mexico. Cuckoo populations have declined drastically since the early 1900s due to habitat loss and modification. They were once found throughout the West from Canada to Mexico, but now are restricted to a few isolated breeding populations in California, Arizona, Colorado, Idaho, New Mexico, and possibly Nevada. The Rio Grande in central New Mexico is home to the largest breeding group of yellow-billed cuckoos north of Mexico. As a result of the species decline, the cuckoo was listed as a “threatened” species under the Endangered Species Act on October 3, 2014. This critical habitat designation is the next step in ensuring the survival and recovery of the species.

Since the Endangered Species Act’s enactment, 99 percent of listed species have avoided extinction, and hundreds more have been set on a path to recovery. Critical habitat protection is a key provision of the Act, intended to make sure that imperiled species have the resources they need to survive, recover, and thrive. Studies have shown that species with designated critical habitat are twice as likely to be moving toward recovery as species without critical habitat. The law is especially important as a defense against the current extinction crisis; species are disappearing at a rate much higher than the natural rate of extinction due to human activities, resulting in what some scientists term a “biological annihilation.” According to a recent United Nations report, over a million species are currently at risk of extinction. Researchers estimate that, if not for ESA protections, 291 species would have gone extinct since the law’s passage in 1973.

A link to the group’s comments can be found here.