Public Lands, Wildlife
#EndTheWarOnWildlife
MISSOULA—Today, local and regional advocacy groups sent a list of recreation hot spots to the Montana Department of Fish, Wildlife and Parks that would benefit from being free of dangerous traps. The seven areas comprise some of the most popular places to visit in the Missoula wildland-urban interface. Indiscriminate and cruel traps are allowed in and around Missoula’s most popular recreation spots even as the region’s economy increasingly relies on outdoor recreation. A global pandemic has made safe and accessible public lands more critical to communal well-being than ever before, and a slew of high-profile incidents involving domestic animals has highlighted the need for safer recreation areas.

Areas proposed for safer access include Kelly Island, Lolo Trails, Council Grove State Park, Jonsrud Park, Marshall Canyon, and important fishing areas along the Clark Fork River and Rock Creek. Along with concentrated public recreation use, these areas are critical for wildlife and biodiversity. Their closure represents a very small fraction of land available to trappers in the Missoula area. Closures would help prevent tragedies like the death of Betsy who was killed in a trap near the Clark Fork River in December, 2019.

“Residents of the City of Missoula and Missoula County have invested for decades in open space and public lands to support habitat and recreation and have expectations that those public spaces are safe for humans and companion animals,” said Missoula Mayor, John Engen. “Prohibiting trapping in these high-traffic public lands seems nothing but reasonable to me.”

“Closing these areas to trapping is baseline common sense for conservation and public safety,” said Sarah McMillan, conservation director of WildEarth Guardians and a longtime Missoula resident. “These areas are not only some of our favored getaways as Missoulans, but are also critical to the wildlife and biodiversity that makes our home such a wonderful place.”

“The time has come to end trapping around communities in Montana,” said Stephen Capra, executive director of Footloose Montana. “It’s not just an issue of safety, but reclaiming the lands that belong to the vast majority that own these public lands and want to utilize them for recreation without fear for their family or pets.”

The Montana Fish and Wildlife Commission has indicated that they are open to hearing from the public about areas that may not be appropriate for trapping. Every year, the commission and the Department review furbearer and wolf trapping regulations. The commission is slated to meet on August 15 to review proposed regulation changes. Conservation advocates, animal welfare enthusiasts, and outdoor recreators hope the commission will consider safe access areas.

Background: Trapping on public lands is legal in Montana. The law does not require trap locations to be marked, signed, or for any warnings to be present. No penalties exist for trappers who unintentionally trap non-target species including endangered species, protected species, domestic animals, pets, humans, or livestock.

No database or official record is kept by any public entity and no requirement exists that trappers report when they have captured a dog in their traps. The pattern these incidents follow is usually similar; dogs screaming and frantically biting at the person desperately trying to rescue them. Veterinary and even human medical treatment along with associated expenses can result, as can long-lasting psychological trauma. Neither the Department of Fish, Wildlife and Parks nor trappers are liable for the damages that are caused by traps.

The true toll that trapping takes on native wildlife is difficult to know. Reporting requirements exist for some species, but not for many, including coyotes, red foxes, badgers, weasels, and raccoons. The accuracy of reporting is unverifiable, and numbers do not adequately articulate the suffering and carnage that traps wreak on bobcats, foxes, endangered wolves, coyotes, and other animals.

The existence of trapping by a minuscule subset of the population using Montana’s public lands is in direct conflict with one of the state’s most valuable economic strengths: outdoor recreation. Outdoor recreation generates $7.1 billion in consumer spending and $2.2 billion in wages and salary in Montana. 71,000 jobs are directly tied to the industry. This economy is not bolstered by piles of dead animals discarded by public roadways or by the thousands of wild animals taken from Montana’s diverse public landscapes for personal profit. 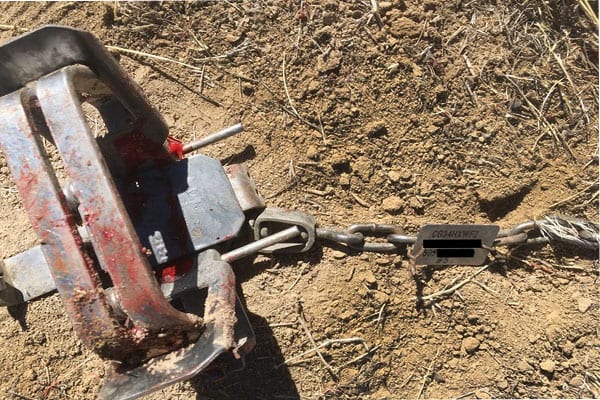