That’s good news for the West’s most cherished wildlands, for public health, and for our clean energy future.

Critically, the agreement commits the EPA to ensure these states’ oldest and dirtiest coal-fired power plants are cleaned up, opening the door to retire or transition them to cleaner energy.

All told, the settlement puts at least 18 coal-fired power plants totaling more than 16,000 megawatts in the West on the path to clean up. It also presents an opportunity to confront more than 120 million tons of carbon dioxide emissions.

The settlement comes on the heels of Guardians’ prior settlements, which have already committed the EPA to take similar steps to slash air pollution in California, Idaho, New Mexico, Oregon, Oklahoma, and Utah. It also comes as we are working together with several other partner groups to secure EPA commitments to do the same in Arizona, Nevada, South Dakota, and many other states.

Air pollution is on the rise in the American West and the impacts are often all too clear: increasingly hazy skies in some of our most pristine landscapes, rising smog levels even in rural communities, and an infusion of toxic compounds into the environment.

Take Rocky Mountain National Park in Colorado, the crown jewel of the Rockies, which not only has smog levels comparable to big cities, but haze levels that are more than twice natural background.

Among the major contributors to this air pollution? The region’s fleet of coal-fired power plants.

The Clean Air Act requires states to clean up their oldest and dirtiest coal-fired power plants. Under a program aimed at reducing regional haze pollution, states are required to ensure these plants are retrofitted with the best available air pollution controls. This is often called “best available retrofit technology,” or BART.

The regional haze program also requires states to cut air pollution from other sources, including cement kilns, refineries, chemical plants, oil and gas development, and even newer coal-fired power plants in order to ensure progress in cleaning the air.

Unfortunately, states have been too slow to adopt plans to meet the Clean Air Act’s regional haze program. In 2009, the EPA found that virtually every state in the country had failed to submit regional haze plans. The EPA informed those states that if they didn’t submit the required plans, they agency would develop federal plans instead.

These regional haze plans will spur widespread reductions in harmful air pollution, but the most significant benefits will occur as a result of the Clean Air Act’s best available retrofit technology requirements.

These retrofits will help pave the way to clean up, retire, or repower 18 coal-fired power plants, which collectively release more than 200,000 tons of sulfur dioxide, 150,000 tons of nitrogen oxides, or NOx, and 120 million tons of carbon dioxide.

Take Colorado, which has proposed to retire or repower five coal-fired power plants in the State as part of the Clean Air-Clean Jobs Act. Today’s settlement ensures that the EPA will approve that plan.

It’s the latest success in WildEarth Guardians’ efforts to ensure that the true cost of burning coal is exposed throughout the American West. All told, our efforts are keeping EPA on track to ensure the clean up of coal-fired power plants in every single western state .

We’ve still got work to do to power past coal in the West, but this settlement is the latest sign of progress. WildEarth Guardians remains committed to ensuring that the true cost of coal is exposed and that we continue to fully transition to cleaner energy sources. 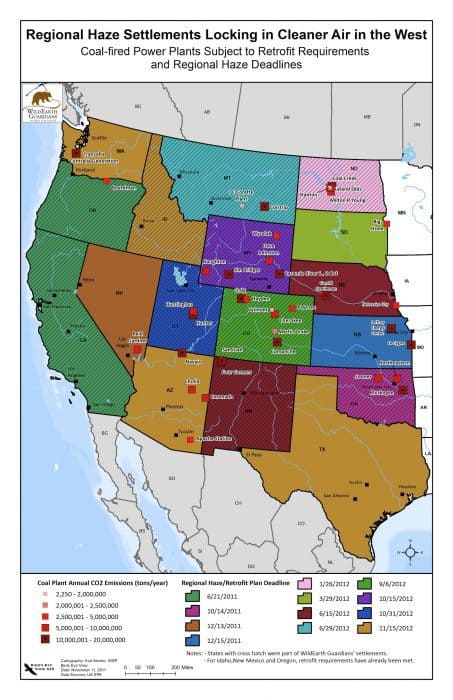