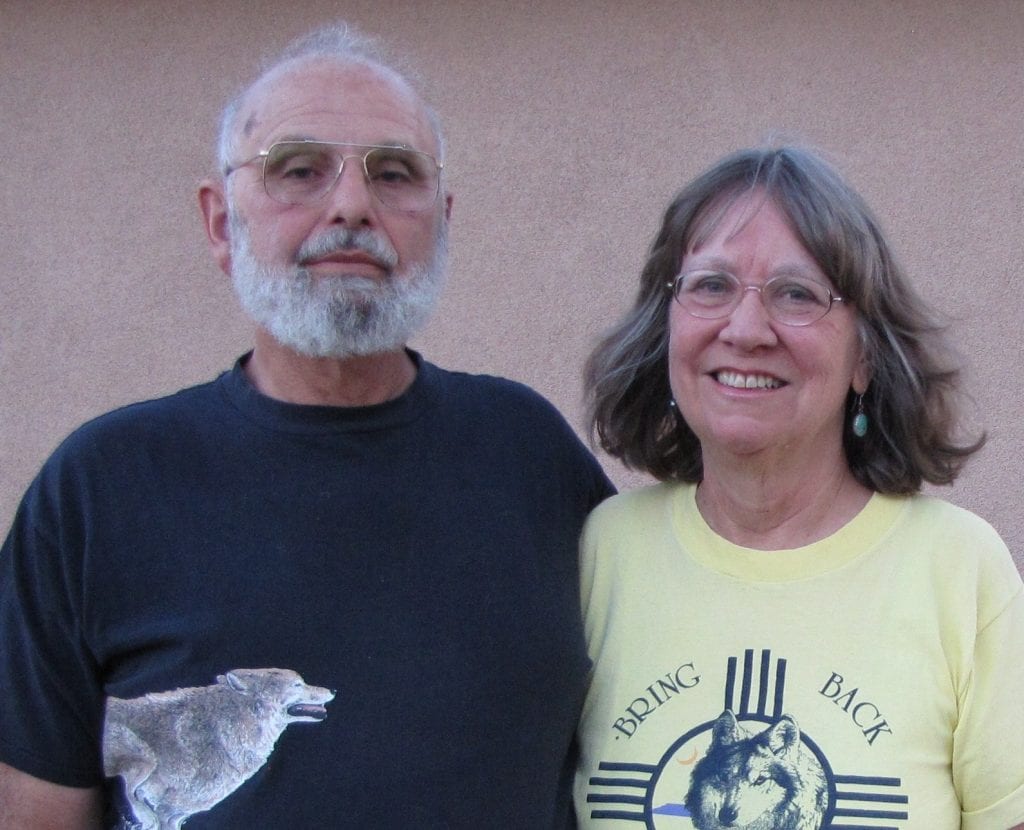 We Are Guardians: One Couple’s Journey to Wolf Advocacy

As guardians, Jean and Peter Ossorio have come to realize that there is no such thing as permanent protection—only guarding against loss.

Jean and Peter Ossorio are a team with 153 years of life experience marked by curiosity, appreciation for other life forms, and decades of advocacy for the underdog—including Mexican gray wolves. Here is their story, in their own words.

Why have we, collectively, spent almost a thousand nights tent camping in Mexican gray wolf country? How did two kids raised in the St. Louis suburbs get there? And why do we spend hundreds of hours a year researching, testifying at agency meetings, and submitting comments—going on now for twenty years—with little discernible impact?

Jean’s path to wolf advocacy was fairly predictable. From her first outing in a wildlife refuge at age six weeks, through a childhood filled with family car camping vacations and raising black widows from their egg case, Jean displayed curiosity and interest in the living things around her. Peter, not so much. His parents’ modest vacations by car took him to the lower 48 states, but outdoors activities mainly consisted of sixth grade summer camp and a mediocre stint in the Boy Scouts. As an adult, Peter’s group camping experiences with masses of other soldiers and diesel-leaking, rut-making, field artillery howitzers created a decades delay in voluntarily camping—this time seeking solitary spaces and natural landscapes.

Jean’s bond with wild canids came not from family pets, but from holding a coyote in 1973 during a visit to a farm that also held several captive gray wolves. As her interest, reading, and knowledge grew, Peter came along as her companion—bringing a growing concern for protecting public lands based on observing the destruction in Vietnam from defoliation, massive bulldozing, and B-52 carpet-bombing causing 15 foot diameter craters in undulating carpets of jungle.

Three years after we moved to New Mexico in late 1995, the USFWS would reintroduce three captive bred Mexican gray wolf families into the wild. We knew the story of their wild great-great-grandparents being deliberately exterminated in the U.S. and most of Mexico—only to be brought back from the edge of extinction by the Endangered Species Act, citizen pressure, and conservation group lawsuits. So, in the fall of 1998, we made a circle tour around the central part of the wolf recovery area in New Mexico and Arizona, hoping to find at least a track. In 1999 we paid a visit to the area along the Campbell Blue Creek in Arizona area and looked at the remnants of the chain link enclosure from which the Hawks Nest Pack had been released. As we were about to hike back to the car, a bark-howl and a fleeting glimpse gave us our first sighting of a wild lobo. Thanks to a chance encounter with a law enforcement agent who had telemetry equipment, we learned we had seen AM 131, previously named “Maska” in captivity.

We thought Mexican gray wolf recovery would take about a decade, with an interim population goal of 100 around 2005. We were wrong. Politically captured by state agencies and subsidized public lands grazing interests, USFWS killed wolves and squandered opportunities to ease the genetic bottleneck caused by so few original founders. We responded by speaking at meetings and writing comments when we would rather have been in the field listening in the dusk for the occasional melodious howl. So we divide our time between witnessing for the wolves and watching for them.  We support over a dozen conservation organizations with what money we can muster, and sometimes as “standing declarants” helping the organization be allowed to represent us and their other members advocating for the wolves in court. WildEarth Guardians stands in the front rank of organizations willing to innovate, litigate, and advocate for our beloved lobos; we have been members for two decades and are excited about their newer, younger staff building toward the future.

Although neither of us is overtly religious, we both were brought up with a strong sense of obligation and responsibility. Peter’s careers as a Field Artillery officer and federal prosecutor nourished an ethic of duty and honor in accomplishing the organizations’ missions. As guardians of national security, the rule of law, or endangered species and the public lands upon which they depend, we have come to realize that there is no such thing as permanent protection—only guarding against loss. So we look to our younger allies in conservation organizations to lace up their boots, spend time in the field, and carry forward the never ending struggle to secure a place for all living things.