WildEarth Guardians, represented by the Western Environmental Law Center, one of the plaintiffs and victors of the original lawsuit, played a central role in the appeal process, one of the first COVID-19 “virtual court hearing” scenarios.

The Greater Yellowstone Ecosystem population of grizzly bears in Idaho, Wyoming, and Montana totals about 728 animals, up from its historic low of 136 when endangered species protections were enacted in 1975. In the original case, opponents of federal protections for grizzly bears argued that protections were no longer necessary and that a sport hunting season to effectively manage down the population was justified despite the fact that the population represents only a fraction of its historical abundance, and has yet to achieve connectivity to neighboring populations near Glacier National Park and elsewhere.

The recovery of other grizzly bear populations depends heavily on inter-population connectivity and genetic exchange. Absent endangered species protections, dispersing grizzlies essential to species recovery would have to pass through a killing zone outside Yellowstone and Grand Teton National Parks where Wyoming and Idaho rushed to approve trophy hunts.

“Grizzlies require continued protection under federal law until the species as a whole is rightfully recovered,” said Matthew Bishop, attorney at the Western Environmental Law Center. “The best available science says not only are grizzly bears still recovering, but they also need our help to bounce back from an extinction threat humans caused in the first place. Misrepresenting the facts to promote killing threatened grizzly bears for fun is disgraceful. I’m glad the judges didn’t fall for it.”

The Ninth Circuit agreed with the original ruling that the delisting was premature, did not rely on the best available science, and improperly failed to analyze the impact killing grizzlies just outside the safety of Yellowstone and Grand Teton National Parks would have on other imperiled populations in the lower 48 states. The Ninth Circuit wrote: “…because there are no concrete, enforceable mechanisms in place to ensure long-term genetic health of the Yellowstone grizzly, the district court correctly concluded that the 2017 Rule is arbitrary and capricious in that regard. Remand to the FWS is necessary for the inclusion of adequate measures to ensure long term protection [p. 45].”

“WildEarth Guardians applauds the decision of the 9th Circuit Court—a triumph of science over politics—in ensuring that Yellowstone grizzly bears are allowed to truly recover and thrive,” said Sarah McMillan, conservation director for WildEarth Guardians. “Grizzly bears are an iconic species whose very existence is intertwined with the concept of endangered species protection in the United States. This decision solidifies the belief of numerous wildlife advocates and native tribes that protecting grizzly bears should be based upon science and the law and not the whims of special interest groups, such as those who want to trophy hunt these great bears.”

Grizzlies in the Yellowstone region remain threatened by dwindling food sources, climate change, small population size, isolation, habitat loss and fragmentation, and high levels of human-caused mortality. The Yellowstone population is isolated and has yet to connect to bears elsewhere in the U.S., including to bears in and around Glacier National Park. Grizzlies also have yet to reclaim key historic habitats, including the Bitterroot Range along the Montana-Idaho border.

Hunted, trapped, and poisoned to near extinction, grizzly bear populations in the contiguous U.S. declined drastically from nearly 50,000 bears to only a few hundred by the 1930s. In response to the decline, the U.S. Fish and Wildlife Service designated the species as threatened under the Endangered Species Act in 1975, a move that likely saved them from extinction. The species has since struggled to hang on, with only roughly 1,800 currently surviving in the lower 48 states. Grizzlies remain absent from nearly 98 percent of their historic range. 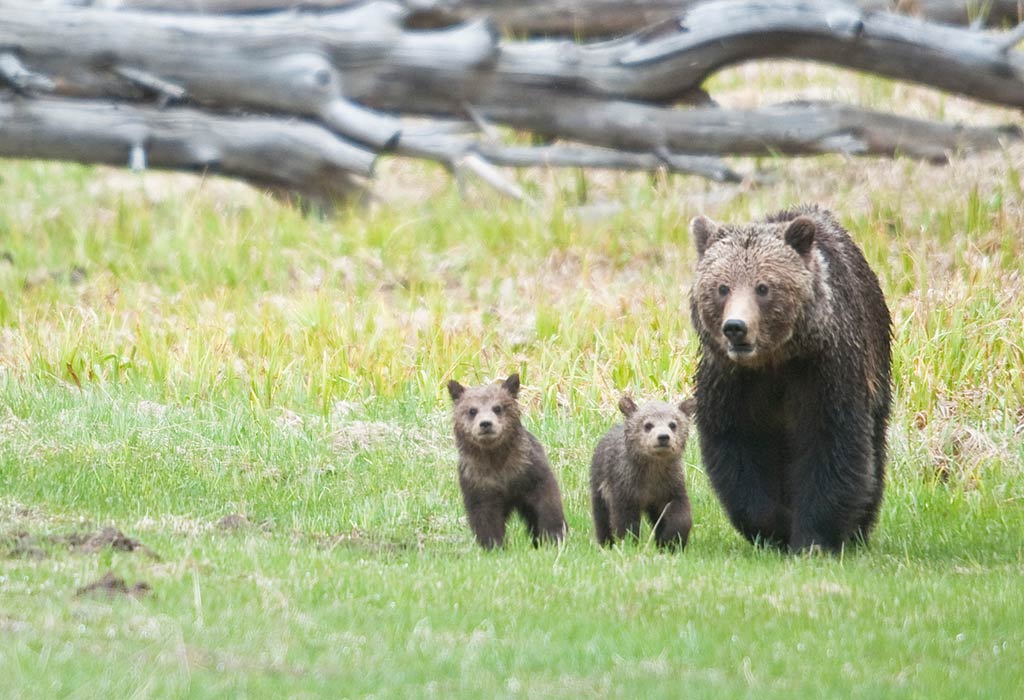 A mother grizzly bear with cubs. Photo by Sam Parks.