Suncor’s refinery is a massive source of toxic air pollution and harmful greenhouse gases. It also disproportionately impacts low income households and communities of color primarily in the 80216 zip code, which is frequently reported as the most polluted zip code in the United States.

“For our climate, clean air, and justice, we simply can’t allow the Suncor oil refinery to keep polluting and putting people at risk,” said Jeremy Nichols, WildEarth Guardians’ Climate and Energy Program Director.  “With this proposal, we’re calling on the Colorado Air Commission to confront the most significant environmental injustice facing the state and finally shut down this dangerous source of harmful pollution.”

Under the proposed rulemaking proceeding, the Air Commission is weighing whether to adopt closure dates for several of the state’s coal-fired power plants and a coal mine in western Colorado.

In a formal Prehearing Statement filed in conjunction with a state rulemaking proceeding, Guardians and 350 Colorado called on the Air Commission to adopt a rule requiring the closure of the Suncor oil refinery no later than December 31, 2025. The groups also urged the Commission to adopt a rule requiring an annual 10% closure of oil and gas extraction facilities in Colorado and to ultimately phase out fracking and production of oil and gas in the state.

“We know that to realistically achieve regional haze goals and Colorado’s greenhouse gas reduction targets under HB1261, that new and existing fossil fuels must be rapidly phased out over the next ten years,” said Michaela Mujica-Steiner, Oil and Gas Campaign Coordinator with 350 Colorado. “The Air Quality Control Commission must recognize and take accountability for the massive role that the oil and gas industry plays in contributing to regional haze. By failing to address this fact in the rulemaking, they (the Air Commission) are failing to step up as bold leaders on the fight against climate change.”

The oil and gas industry is responsible for approximately 40% of ozone pollution along the Front Range, according to research from NOAA and CIRES, and as much as 60% of the global spike in methane emissions over the past decade, according to Cornell research, that is exacerbating the climate crisis leading to more drought, pine beetle infestations, and record temperatures worsening wildfires that contribute to extreme haze.

In a memorandum supporting their proposal, the groups cited the fact that the Suncor oil refinery releases nearly one million metric tons of carbon pollution annually, as much as 216,000 passenger vehicles.

With House Bill 19-1261 requiring the state to achieve environmental justice and prioritize reducing greenhouse gas emissions in disproportionately impacted communities, the groups argued that shuttering the refinery is compelled by law.

Coupled with other co-benefits related to the reduction of harmful emissions, including reduced smog and haze forming emissions, the groups found that the costs of closing the refinery would be far less than the cost of pollution controls and ongoing operation.

Suncor’s air pollution is worsened by the fact that the company chronically violates its air quality permit and clean air laws and regulations. Even after agreeing earlier this year to pay millions to resolve years of non-compliance, the company continues to violate.

The Air Commission is scheduled to conduct a virtual rulemaking hearing in November, at which time they will decide whether to adopt WildEarth Guardians and 350 Colorado’s proposal. 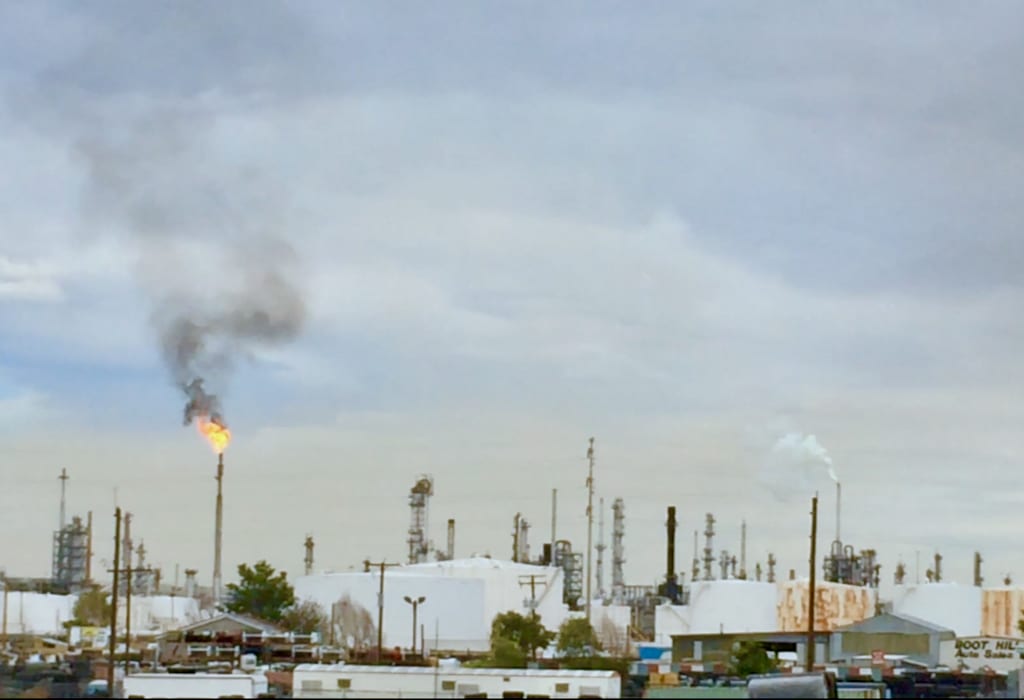 The Suncor oil refinery north of Denver is a “high priority violator” of clean air laws according to the U.S. Environmental Protection Agency.