Rivers
#ForceForNature, #LivingRio, #LivingRivers, #PressStatement, #RethinkRivers, #RioGrande
ALBUQUERQUE, N.M.–The Natural Resource Conservation Service (NRCS) released its streamflow forecast for the Rio Grande Basin for March 2021. NRCS estimates streamflow at 54% percent of average at the Otowi Gauge in northern New Mexico, down from 59% in February. A decision by the Middle Rio Grande Conservancy District (District) to delay the start of irrigation season by one month, from March 1 to April 1, is helping hold flows in the river steady this spring.

“This year of extremely low flow on the Rio Grande is going to be about sacrifice for everyone,” said Tricia Snyder, Rio Grande Campaigner at WildEarth Guardians. “It is going to take hard choices and inclusive balancing of values, if we have any chance of getting through this summer without extensive and permanent damage to the ecological health of the river, as well as to the plant, wildlife, and human communities that depend on it.”

March normally marks the beginning of the irrigation season in the Middle Rio Grande valley from Cochiti dam to Elephant Butte Reservoir. This increased use by farmers coincides with the time of year when flows in the river naturally would start to swell to create a peak in the natural flow pattern in late spring and early summer. This year, however, due to low flow conditions, minimal reservoir storage, and restrictions under the Rio Grande Compact, the District agreed to delay the start of the irrigation season by one month.

“The delay of the irrigation season is a welcome concession by water users to ease the pain of an incredibly challenging season ahead,” added Snyder. “We hope that all voices will be consulted and heard this summer to ensure the health of both people and the environment.”

In other dry years where irrigation began in March, like 2018, the Rio Grande began drying in April. One species that has particularly adapted to depend on these spring peaks for population recruitment, is the federally listed Rio Grande silvery minnow. The swelling of the river in the spring sends a signal to these fish, historically found throughout the region, that it’s time to spawn. As flows spill over the banks into the floodplain of the river, important low-velocity habitats are created that both eggs and newly hatched silvery minnow depend on to survive. The reduction in these peak flows and available habitat has limited the range of the silvery minnow—that once existed from Espanola, NM to the Gulf of Mexico—to only 5 percent of what it occupied historically.

One of the most similar years in the past decade to 2021 in terms of streamflow forecasts was 2013, which was one of the driest in New Mexico’s history. Farmers in the Elephant Butte Irrigation District and El Paso County Water Improvement District No. 1 received a mere 3.5 inches of water per acre, compared to their normal 36 inches per acre. Likewise, the lack of water available in the river in 2013 and several years without peak flows resulted in silvery minnow populations hovering near extinction. 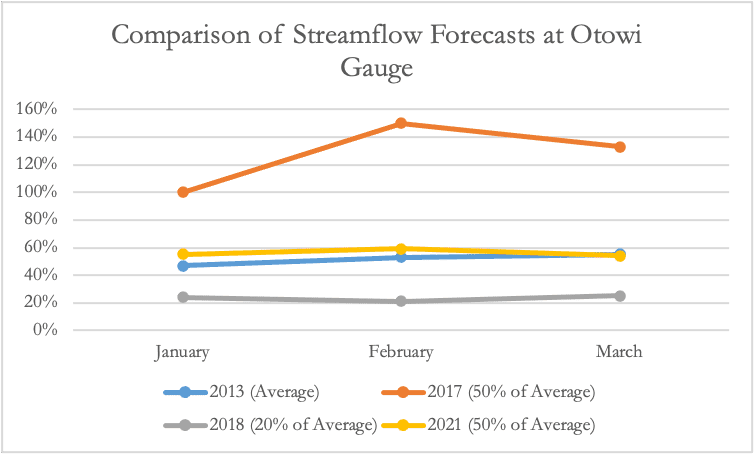 Unfortunately, unlike in 2018 or even 2013, this year there is little to no water in storage. The NRCS’s summary of reservoir storage shows the five main storage reservoirs on the Rio Grande and the Rio Chama—Heron, El Vado, Abiquiu, Elephant Butte, and Caballo—at about 7% of capacity in 2021, a total of 321,485 acre-feet (104 billion gallons). In 2013 reservoir storage was closer to 13%, with a total of 546,500 acre-feet (178 billion gallons) and in 2018, it was closer to 17% capacity, with a total of 862,800 acre-feet (281 billion gallons.) An acre-foot is the amount of water it takes to cover a football field in one foot of water and is enough to supply water to a family of four for one year. 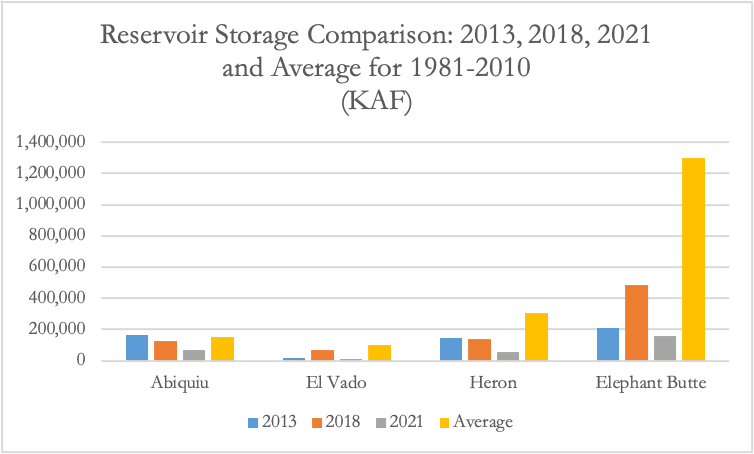 Reservoir storage comparison of reservoirs on the Rio Grande and the Rio Chama in 2013, 2018, and 2021 as compared to average storage 1981-2010. See: https://www.nrcs.usda.gov/wps/portal/nrcs/main/nm/snow/waterproducts/basin/

Even in 2017, the year with the best streamflow forecasts in the past decade, every drop of water was owed to someone and the river dried in late summer south of Albuquerque. In years like 2021, where New Mexicans can expect to see at most half of the average streamflow and reservoir storage is low, there is just not the water to meet the demand.

“We can’t keep overpromising water that does not exist in the system,” said Jen Pelz, Wild Rivers Program Director at WildEarth Guardians. “We need to start thinking realistically and holistically about what a sustainable Rio Grande looks like for both people and the environment to ensure we have a living river now and for generations to come.”