Rivers
#LivingRio, #LivingRivers, #ProtectWhatYouLove, #RethinkRivers, #StopExtinction
SANTA FE, NM.––The Natural Resources Conservation Service released its monthly streamflow forecast for the Rio Grande Basin this week predicting Rio Grande flows (at the Otowi gauge near Santa Fe) will be 64 percent of average this year. This is a dramatic decrease in predicted flows from the 90 percent forecast in January. The news is even worse in southern New Mexico and Texas where flows are expected to be just 50 percent of average.

“The Rio Grande is severely over allocated and below average flows are bad news for the health of the river,” said Galen Hecht, Rio Grande Campaigner at WildEarth Guardians. “We need to brace for a dry year and plan for how to ensure both communities and the environment can remain healthy when flows are diminished.”

Snowpack hovered around average throughout the Rio Grande Basin in January but in February it declined to 72 percent of average in the headwaters in Colorado and 87 percent of average in the Sangre de Cristo Mountains. There are various reasons flow forecasts can be so much lower than snowpack, but this year the key reasons were below average precipitation in the headwaters in February and a persistent moderate drought in the Rio Grande watershed.

As is characteristic of this river, the Rio Grande’s flows are variable year-to-year. The graph below shows the last decade of monthly forecasts. 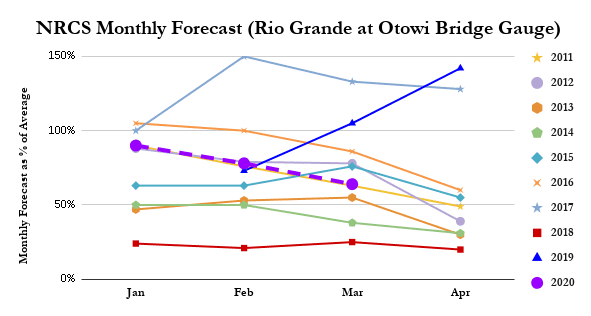 This year’s flows are tracking downward after a dry spring in the Rio Grande headwaters.

“As this year’s flows track downward, there is little chance of a vital spring pulse flow or sustained late summer flows in the river,” says Hecht. “Such flows are important for triggering spawning in endangered fish, nourishing the riverside Bosque and ensuring habitat and refuge for native fish and wildlife–all the things that are essential to a living river.”

Abnormally dry to severe drought conditions persist in the Rio Grande Basin from around Albuquerque north through the headwaters. In part the drought is a result of a lackluster monsoon in 2019, which was the third hottest and ninth driest monsoon season in the Southwest in a 125 year old record. 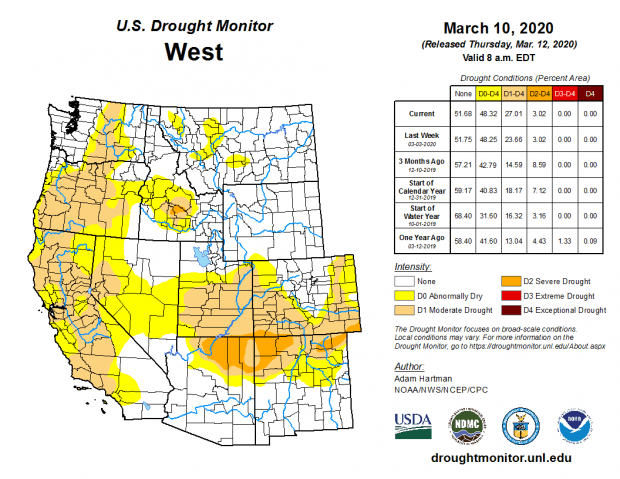 “Climate change is drying rivers in the Southwest,” concludes Hecht. “We need to brace for aridification, which means making hard choices and ultimately using less water.”