Wildlife
#EndangeredSpeciesAct
Washington, DC—Today, in response to a petition by WildEarth Guardians, the U.S. Fish and Wildlife Service (Service) finalized protections for five species of Sri Lankan spider under the Endangered Species Act (ESA), listing them as “endangered.” These large, brightly-colored spiders, referred to as tarantulas though they are members of the genus Poecilotheria, are sought by insect collectors for the exotic pet trade. Their Sri Lankan forest habitat is rapidly shrinking, eliminating the last refuges for the rare spiders.

“We’re thrilled that these beautiful spiders, imperiled by human greed, now have additional protections to help them survive,” said Taylor Jones, endangered species advocate for WildEarth Guardians. “We hope these protections encourage conservation and raise awareness about the plight of these species in the wild and the perils of the exotic pet trade.”

Sri Lanka prohibits the commercial collection of all five spider species, but enforcement is difficult. Captive-bred spiders meet much of the trade demand, but even modest amounts of collection from the wild can negatively impact a small and shrinking population. Sri Lanka lost most of its forest cover over the past several decades to illicit timber harvesting, forest fires, destructive mining, and clearing for development and agriculture. As habitat disappears and populations shrink, collection becomes a greater threat to the species.

“The Endangered Species Act is a proven and effective tool for preventing extinction and aiding imperiled species,” said Jones. “This listing is an important step toward recovery of these small populations of beautiful spiders.”

Protection under the ESA is an effective safety net for imperiled species: more than 99 percent of plants and animals protected by the law exist today. The law is especially important as a defense against the current extinction crisis; species are disappearing at a rate much higher than the natural rate of extinction due to human activities. Scientists estimate that 227 species would have gone extinct by 2006 if not for ESA protections. Listing species with international or global distribution can both protect the species domestically, and help focus U.S. resources toward enforcement of international regulation and recovery of the species. 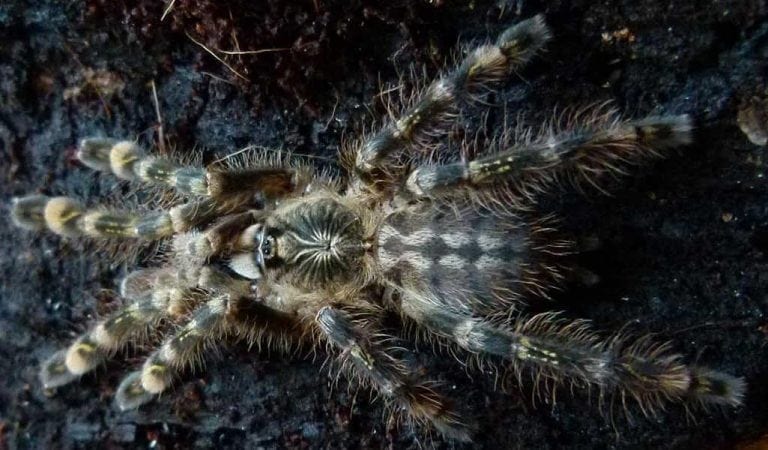 All species in the genus Poecilotheria are arboreal (tree-dwelling). They prefer wooded areas and tree holes in tropical and subtropical forests. Poecilotheria species have short lifespans, ranging from 12-15 months for male maturation and 14-18 months for female maturation. Average post-adult female age is 60-85 months. These species experience high mortality rates prior to maturation and have low reproductive rates for an arachnid (averaging 100 eggs annually).

The spiders do not use webs; rather, they attack prey from hiding places (tree holes, tree trunks, tree bark), and inject venom to immobilize it.

Poecilotheria fasciata. This species lives in the dry and intermediate zones of Sri Lanka north of Colombo. Scientists found >150 individuals in nine locations during the most recent survey. It is categorized as “endangered” on the National Red List of Sri Lanka (a report of the status of regional species based on the IUCN Red List, an inventory of the conservation status of species on a global scale).

Poecilotheria ornata. This species inhabits the lowland wet zone in southwestern Sri Lanka. Scientists found 23 individuals in four locations during the most recent survey. It is categorized as “endangered” on the National Red List of Sri Lanka.

Poecilotheria smithi. This species is found in the central highlands of Sri Lanka in Kandy and Matale districts. Scientists found 16 individuals in two locations during the most recent survey. It is categorized as “critically endangered”, the most imperiled ranking, on the National Red List of Sri Lanka.

Poecilotheria subfusca. This species inhabits the wet zone of the central highlands of Sri Lanka. Scientists found 81 individuals in 10 locations during the most recent survey. It is categorized as “endangered” on the National Red List of Sri Lanka.

Poecilotheria vittata. This species lives in the Hambantota and Monaragala districts of Sri Lanka. Scientists found 22 individuals in four locations during the most recent survey. It is categorized as “endangered” on the National Red List of Sri Lanka.