New Mexico Legislature turns back on oil and gas accountability

Groups express outrage over 100% failure to rein in costly fracking

Santa Fe, N.M—Despite a new wave of legislators and a Governor that continues to promise action on climate, the 2021 New Mexico legislative session will close having failed to move forward a single bill that would protect public interest over oil and gas industry profit.

New Mexicans have expressed outrage over the thwarting of bills like SB 86 “Protect Our Water,” SB 149 “Pause on Fracking,” SJR 3 “Environmental Rights,” HB 9 “Climate Solutions Act” and many others that were refused a hearing or tabled by Democratic leadership in committees this session.  Groups held a virtual press conference today to publicize their concerns.

Analysis and data collected by state agencies from oil and gas operators appear to be of poor quality and subject to manipulation. Questionable data is the basis for state revenue collection, and the New Mexico Environment Department and Oil Conservation Division remain woefully underfunded and chronically unable to monitor, supervise, regulate, and enforce oil and gas activities.

The oil and gas industry is New Mexico’s top emitter of climate pollution and continued oil and gas extraction is costing New Mexico dearly, with further exploitation of the NM Permian threatening the world with a “climate bomb” and rendering the state unable to meet the Governor’s climate goals. As New Mexico suffers from increased drought and another dry winter, the oil and gas industry continues to frack with abandon, churning the state’s precious fresh water into toxic and radioactive waste. Right now this waste, euphemistically called “produced water”, is leaking, spilling, and exploding daily across New Mexico contaminating land, air, and water, and people.

Despite industry posturing, oil and gas extraction is on the rise and New Mexico ranks top three in the nation for oil and gas production, yet the state continues to rank lowest in the U.S. for public education (#50), general opportunity (#49), and overall well being (#48). Fracking disproportionately impacts Tribal Nations and low-income families with more than more than 115,000 New Mexicans living within one mile of an oil and gas well and nearly 20% of New Mexican families living below the poverty line.

While the Biden Administration has made fossil fuel transition and environmental justice a priority, the stranglehold of oil and gas influence on state politics compels legislators to ignore the looming environmental and health crisis, seemingly determined to leave New Mexicans behind.

A report from NM Ethics Watch found the influence of oil and gas money in state politics dwarfed those of other industries with almost $3.3 million in direct campaign contributions to NM politicians this past election cycle, not accounting for lobbyist salaries or expenses. Greasing both sides of the aisle, the oil and gas industry gave more than $182,000 to House Speaker Brian Egolf’s PAC and $67,500 to the New Mexico Senate Democrats’ PAC in 2020 alone.

As Governor Michelle Lujan Grisham threatens to challenge federal efforts to rein in unfettered fracking on federal lands in New Mexico, groups are vowing to hold elected officials accountable to promises to protect their constituents, end sacrifice zones, and put people over oil and gas profits.

“New Mexico continues to blindly proffer frackers, but what do we have to show for it – despite being #3 for oil and gas, we’re the poorest state in the nation with the worst education and the highest rates of childhood poverty and hunger. If Democrats won’t follow through with promises to protect New Mexicans and lead the necessary transition away from oil and gas, we vow to vote in leaders who will. New Mexicans deserve more than polluted politics,” said Rebecca Sobel, senior climate and energy campaigner for WildEarth Guardians who spoke at today’s virtual press conference.

“This legislative session has communicated to the Native American New Mexican citizens that the priority of the State of New Mexico is money over the health and safety of the people.  There was a great chance this session to move the state in a leadership role on how to respond and develop courageous legislation that protects the essential elements of life; water, air and food.  Produced water is a toxic waste that, if spilled, is not illegal.  The State of New Mexico and its elected leadership and its inaction has chosen to follow a path of eventual catastrophic environmental liability,” said Mario Atencio, Diné CARE who spoke at today’s virtual press conference.

“Oil & Gas Industry and PNM contributions flowed into the coffers of legislators and the Governor at an unprecedented rate in 2020 and they got what they paid for: NO REGULATION! Free rein to pollute and collect cash, and we got the curse: asthma and other diseases, contamination of air, water and land, and the blatant undermining of our democracy. At a time when we need extraordinary government action to address the climate and economic crisis, our senior elected officials are catering to their campaign contributors, not protecting the health and welfare of New Mexicans. Shameful,” said Mariel Nanasi, Executive Director, New Energy Economy and moderator for today’s virtual press conference.

“Leadership means facing hard realities and developing solutions. The harsh reality in New Mexico is that the generations that have come before us have built an economy that is dependent on an industry that is killing us. It’s time to acknowledge that this is an abusive relationship and it’s time to leave it.  We cannot continue to dig our heads in the sand and ignore the present and pending reality that we cannot keep fracking. We cannot continue to turn fresh water into toxic fracking waste. We cannot continue to pay for the collateral damage of industry in public health crises and tax dollars. We cannot continue to make excuses for and cleanup after industry. We have to find a way to leave remaining fossil fuels in the ground. We have to value our water. We have to value the health of Indigenous and other frontline communities. We have to value our futures. And we have to respect what science is telling us, which is that we have 9 years left to reverse course and change the foundation of our economy. We have nine years left and we just saw another year wasted,” said Seneca Johnson, YUCCA who spoke at today’s virtual press conference

“It did not matter that over 500 letters, a petition from 38 groups whose membership represents 150,000 people in support of SB 149 were received. We saw firsthand the bias against legislation that would challenge the reign of oil and gas. Fiscal impact reports withheld crucial fiscal information on oil and gas industry revenue and true costs.  We came to the legislature for redress on important issues impacting New Mexicans and we got the door slammed in our faces. We saw leadership turn a blind-eye on a corrupted process. This is why New Mexico is last – until this behavior changes and politicians become accountable to constituents instead of oil industry lobbyists, New Mexico will continue to be a sacrifice zone. New Mexicans deserve better,”  said Elaine Cimino of Common Ground Rising

“The New Mexico Legislature has failed New Mexico, New Mexicans and Mother Earth.  How can New Mexico claim that we are a leader in renewable energy and energy transition when our state lawmakers will not even hear environmental protection legislation for the People of New Mexico to decide on.  The process of addressing proposed legislation must be changed.  As we all know, legislation is created by the People and sponsored by a State lawmaker.  This year’s legislative session was a shame, for New Mexico and in front of America,” said Terry A, Sloan, Director Southwest Native Cultures

“This legislative session is ending with a 100% failure to move legislation that acknowledges the climate crisis, environmental disasters, and public health emergencies caused by fracking in New Mexico. The oil and gas industry – the biggest campaign contributor to legislators clearly has a stranglehold on our state,” said Margaret Wadsworth of Food & Water Watch. 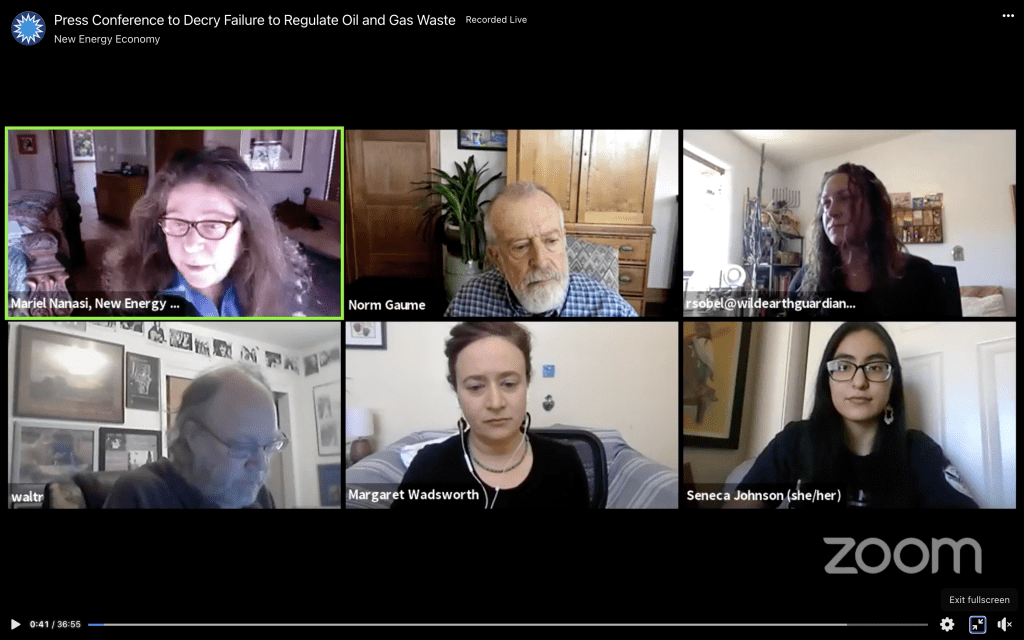