While the whole world is dealing with a public health crisis, the oil and gas industry is looking for another bailout to continue fracking forever

In newspaper ads in the Santa Fe New Mexican and through a social media blitz, the groups called on the state’s U.S. House and Senate members to safeguard New Mexicans by focusing stimulus money on public health, families, workers and just-transition jobs and training. The oil industry is requesting financial aid and deregulation from the Trump administration.

New Mexico’s delegation was absent from a letter last week from members of Congress to the U.S. Treasury Department and the Federal Reserve opposing the oil industry’s requests for financial support and deregulation in response to the COVID-19 crisis.

A recent study found that greenhouse gas pollution from future oil and gas development in New Mexico will thwart efforts to limit warming to 1.5 degrees Celsius and could exceed Gov. Michelle Lujan Grisham’s 2030 emissions target by a factor of 10.

“While the whole world is dealing with a public health crisis, the oil and gas industry is looking for another bailout to continue fracking forever,” said Rebecca Sobel, a climate and energy campaigner for WildEarth Guardians. “Right now New Mexico is losing money by allowing more oil and gas extraction, while contributing to toxic pollution and climate change. It is shameful to consider furthering polluter profits as relief support when the oil and gas industry is killing people.”

“The American people deserve political leadership that puts people over polluters and has the foresight to confront the great challenge our country is facing: a confluence of pandemic, economic and climate crises,” said Erik Schlenker-Goodrich, executive director at the Western Environmental Law Center. “Our political leadership must be able to chew gum and walk at the same time, knowing that the path to a thriving American future is in understanding our confluence of crises and charting a path that addresses each of them.”

“Efforts to bail out oil producers in New Mexico during the time of COVID-19 is unconscionable, especially when the legitimate concerns of native communities with respect to the adverse impacts to their health, environment, social and cultural landscape caused by decades of oil and gas development have been ignored for too long by industry and federal agencies,” said Samual Sage, vice president at Diné Citizens Against Ruining Our Environment. “This is just downright wrong. Enough is enough. We sincerely hope our political leadership put people first.”

“Not one dollar of public money should go to fossil fuel billionaires trying to shamelessly profit off this crisis,” said Taylor McKinnon, a public lands campaigner at the Center for Biological Diversity. “New Mexico’s delegation must take the lead to ensure that emergency federal aid during the coronavirus pandemic helps people, not corporate polluters.”

“Ensuring stimulus funds flow directly to the vulnerable communities that need them most is quite literally a life-and-death issue,” said Collin Rees, a campaigner at Oil Change International. “Bailing out the failing oil and gas industry to line the pockets of Big Oil CEOs would be an unconscionable disaster. New Mexico’s delegation needs to make clear it stands with working people and marginalized communities, not big polluters.”

“Millions of Americans are hurting while Donald Trump and congressional Republicans shovel billions of taxpayer dollars to rescue the fracking industry and Wall Street speculators. These giant corporations cannot be allowed to destroy our climate,” said Margaret Wadsworth at Food and Water Action. “In New Mexico fracking is damaging our air, our water and our sacred lands. New Mexico’s elected officials must join the fight to make sure that all New Mexicans are protected during this crisis, not oil and gas corporations.” 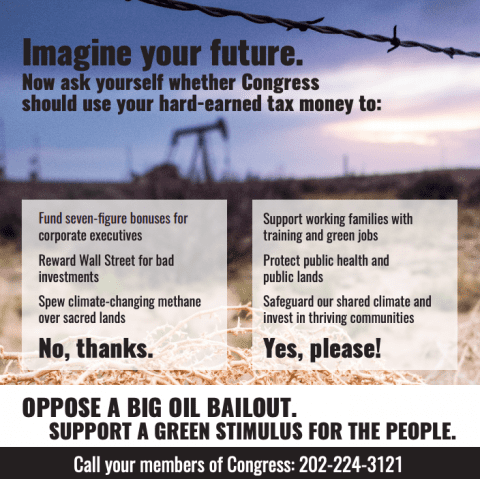