Climate + Energy
#ClimateJustice, #FrackOffChaco, #GreaterChaco, #KeepItInTheGround, #PressStatement, #RioGrande
Albuquerque, NM—Water protectors gathered on the edge of the Rio Grande today to voice opposition to attempts at disguising toxic fracking waste as anything but a liability for New Mexicans. More than two dozen activists gathered with signs and banners hung from the Alameda Bridge to oppose the NM Desalination “New Water” conference held down the road at Sandia Resort and Casino. After the event, activists disseminated a fact sheet related to frackwaste concerns to conference attendees.

Adding their voice to growing calls to put New Mexico’s clean water and public health before industry profits, the youth, Indigenous, and environmental advocates called out the “New Water for New Mexico” conference as a charade to dupe New Mexicans into subsidizing and buying radioactive toxic waste from the oil and gas industry.

“The oil and gas industry has had a stranglehold on New Mexico for far too long. These latest ploys to market fracking waste as ‘new water’ show just how far the industry will go to offload its externalities onto New Mexican communities and our environment,” said Soni Grant, an organizer with WildEarth Guardians.

With oil and gas booming in New Mexico, industry is facing rising costs and difficulties in disposing and managing  its waste. Instead of reducing production or increasing environmental health protections, industry has lobbied officials to roll-back safeguards and relabel their waste as “produced water,” or worse yet, “new water.”  “Produced water” is too toxic to treat, containing contaminants that can’t be removed, including radioactive materials, heavy metals, and extreme salts.

“Back in February 2019, Enduring Resources’ oil and gas well 0315H spilled approximately 42,000 gallons of produced water on my family’s land on the Navajo Nation in Counselors, New Mexico,” said Mario Atencio, Greater Chaco Energy Organizer with Diné C.A.R.E.. “That spill contaminated the groundwater. Our family was never notified of the spill nor the scope of the clean-up. That clean-up process was minimal and in the end there has been no accountability. Our lands are in the Greater Chaco Landscape and that spill continues to cause harm to the landscape. The lack of respect to Navajo landowners regarding the spill of the toxic frack water showcases the environmental racism that pervades oil and gas development in the Greater Chaco Landscape.”

There are more than three spills of produced water per day in New Mexico, with explosions happening in people’s backyards and in sacred areas. More than 2 million gallons of waste were spilled in 2020 alone, and there have been almost 700 produced water spills so far in 2022.

“Spills, leaks, and explosions are business as usual for the fracking industry,” said Rebecca Sobel, Organizing Director for WildEarth Guardians. “Instead of investing in enforcement and regulation, the state seems to be paving the way for frackers to dump their toxic waste into New Mexico’s rivers and streams, and onto crops.”

Since February 2020, the New Mexico Oil Conservation Division has had the expressed authority under the Oil and Gas Act to issue fines and penalties for spills, but the Division has yet to issue a single enforcement action for the thousands of spills that have occurred in the Greater Chaco and Greater Carlsbad regions since 2020.

“New Mexicans deserve better. We deserve real climate solutions based in scientific fact, not greenwashed distractions influenced by corporate greed. We deserve more than an industry that claims to care so much when they brag about how many jobs they bring to our State’s economy, but in the same breath, lobby against safety regulations that protect its own workers,” said Jonathan Juarez, Policy Lead with YUCCA. “And we deserve better than a Governor who claims to care so much about climate justice but offers nothing more than the same regurgitated talking points we hear from the oil tycoons holding our state’s budget hostage.”

< Photos and videos available for press > 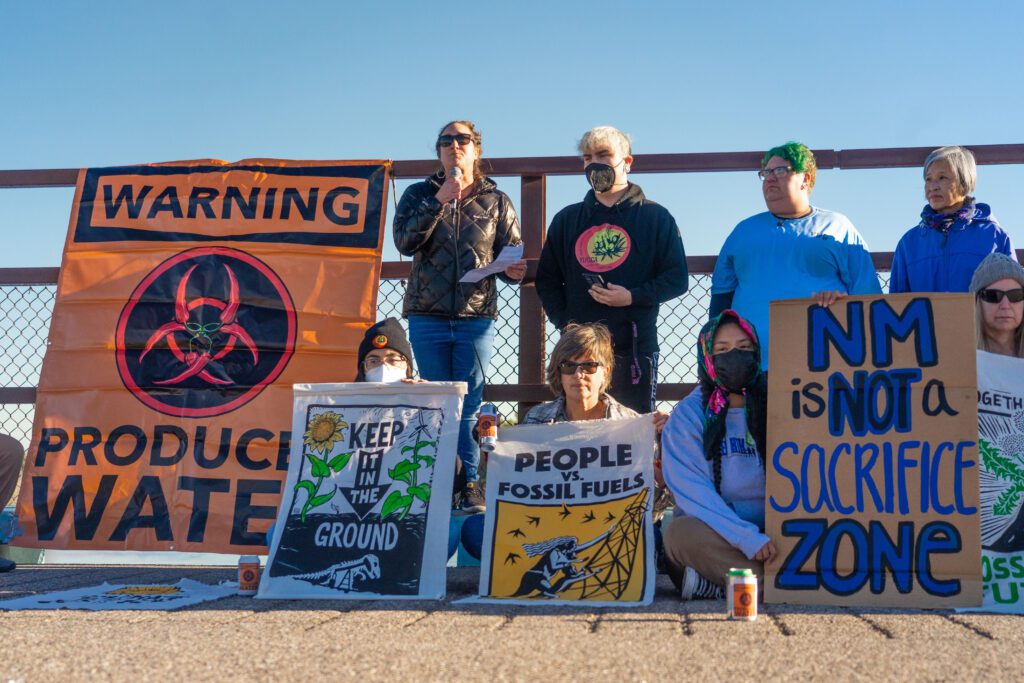