Unsustainable Water Use and Management Key Factor in Crisis

Rivers
#ReviveTheRio
ALBUQUERQUE, NM–As temperatures in Albuquerque climb to triple digits, the Rio Grande’s flows continue to recede leaving vast islands and sandy channels where the mighty river once roamed. The contrast between conditions this year and last year is stark.

In 2017, the April forecast for the Rio Grande at the Otowi Gauge was 128 percent of average; this year it is 20. The U.S. Drought Monitor’s maps by Brian Fuchs show New Mexico going from only about a quarter of the state in abnormally or moderately dry conditions in June of 2017 to the majority of the state in extreme or exceptional drought this year.

These conditions are driving the early low flows in the Basin, but are not the sole cause of the crisis as seems to be the nationwide narrative.

“Climate change is exposing cracks in western water policy and is shining a spotlight on the unsustainable allocation of water from our rivers and streams,” said Jen Pelz, Rio Grande Waterkeeper and Wild Rivers Program Director at WildEarth Guardians. “The emerging disaster on the Rio Grande this year comes from archaic water policies, lack of accountability by the states, and water managers acting like its business as usual despite the dire stream flow conditions.”

Three main flaws in water policy and enforcement are driving the situation this year. First, the Rio Grande Compact—an agreement between Colorado, New Mexico, and Texas that sought in 1938 to equitably allocate the waters of the Rio Grande between the states–is operating in dry years to magnify the climate changed induced flow declines. When flows are above average (128 percent), like in 2017, Colorado’s delivery obligations to downstream states roughly mimic the flows at the index gauge. 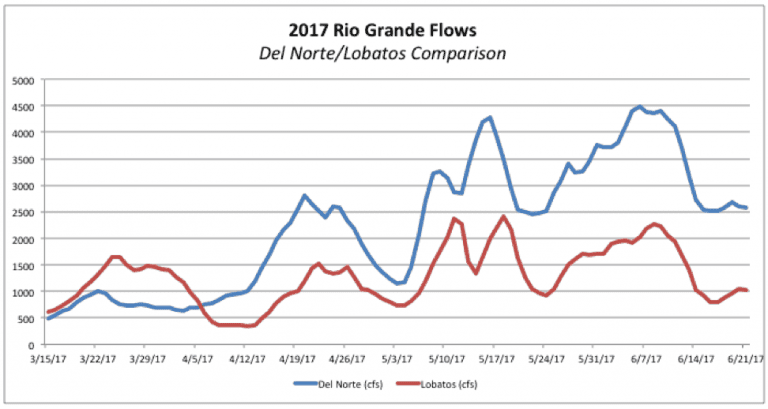 However, when flows cease to reach a threshold of about 4,000 cubic feet per second, the delivery obligation of Colorado ceases entirely meaning Colorado water users can take every last drop and be entirely within the terms of the compact. 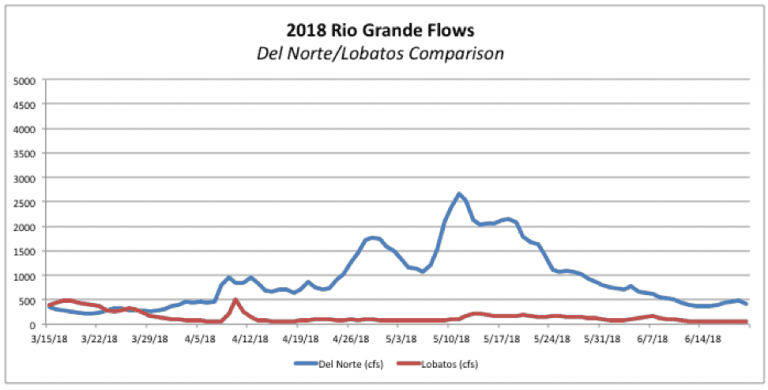 The Rio Grande Compact, like other western water agreements, is based on data from an unrepresentative wet period in the historical record; therefore, the allocation system is far from equitable.

Second, the State of New Mexico provides no leadership or accountability to ensure water users in the state are only using what they need. The Middle Rio Grande Conservancy District, for example, requested a permit in 1925 to irrigate over 100,000 acres in the Middle Rio Grande valley from Cochiti Dam to Elephant Butte Dam. The District, however, has not (90 years later) ever proven that it has irrigated the acreage contemplated in the permit, nor that it needs the water it has claimed. This is a fundamental requirement under the New Mexico Constitution that is being blatantly disregarded.

Finally, the District—the entity that delivers water to farmers in the Middle Rio Grande—just last week finally limited its diversions to the more senior users. Despite anticipated flows of 20 percent of average, the District provided water to the most junior users—those that do not have any claim to water—from March 1 to June 12 (104 days).

“These institutional agreements and policies not only threaten the health of the river, but also put the most senior users’ ability to irrigate to the end of the season at risk,” added Pelz. “The wild west days are over and climate change is exposing these flawed choices. It’s time to find a new sustainable path forward.”

WildEarth Guardians works to protect and restore the wildlife, wild places, wild rivers, and health of the American West. Our Rio Grande: America’s Great River campaign seeks to provide the Rio Grande with a right to its own water and to reform western water policy for a sustainable future for this icon.