For the climate, federal government must phase out fossil fuels

Climate + Energy
#ClimateJustice, #JustTransition, #KeepItInTheGround, #PressStatement
WASHINGTON – More than 300 community groups today sent a letter to the Interior Department outlining nine concrete steps it has authority to take to bring public lands and waters management in line with climate science and the president’s own climate promises.

The letter comes on the heels of a recent lease sale in Alaska’s Cook Inlet, the first held by the Interior Department since passage of the Inflation Reduction Act (IRA), which reinstated several oil and gas lease sales. The administration is currently weighing whether to approve more oil and gas projects, such as Willow and Peregrine in the Arctic. Additional lease sales both onshore and offshore are slated for later this year, including two in the Gulf of Mexico in September.

Although President Biden initially pledged to ban oil and gas leasing on public lands and waters, he issued drilling permits at a rate faster than Trump during his first year in office. He then went on to hold new oil and gas lease sales on public lands and waters, including Lease Sale 257 in the Gulf of Mexico, the largest in U.S. history, which was later vacated after a lawsuit filed by environmental groups.

Groups call on Interior to take the following actions:

“More drilling and more fracking is just a recipe for more climate disaster,” said Jeremy Nichols, climate and energy program director for WildEarth Guardians. “For our future, President Biden needs to get real, start keeping oil and gas in the ground, and truly drive meaningful action to save our climate.”

“As the dire impacts of climate disruption escalate, President Biden must keep his campaign promise to end oil and gas leasing on public lands,” said Osprey Orielle Lake, Women’s Earth and Climate Action Network (WECAN) Executive Director. “Indigenous and frontline communities continue to bear the brunt of the climate crisis, and we are calling for the administration to end fossil fuel expansion and implement a Just Transition. There is simply no time to lose and our public lands need to be a part of the solution.”

“As cities across our nation and across the globe are experiencing the adverse and worsening effects of climate change and sea rise, our leaders have the opportunity to make the right decision in our best interest,” said Sonia Ahkivgak, Social Outreach Coordinator for Sovereign Iñupiat for a Living Arctic. “Continuing to extract fossil fuels will only dig us a deeper grave and make it harder for our future generations to right our wrongs. For the sake of the climate, our economy, nature, and humanity, stop all fossil fuel extractions and declare a climate emergency.”

“President Biden ran a campaign promising to deal with the climate crisis and ensure public lands were protected from further oil and gas development,” said Joanie Steinhaus, Gulf Program Director for Turtle Island Restoration Network. “Biden needs to stand up for frontline and Indigenous communities that have for decades bore the brunt of the pollution and health concerns from this industry.”

“After two years of failed promises, it’s time for President Biden to finally live up to his promise to protect the planet and communities from further climate catastrophe,” said Nicole Ghio, Senior Fossil Fuels Program Manager at Friends of the Earth. “Nearly a quarter of U.S. climate emissions come from fossil fuel extraction on public lands. If Biden wants to salvage his reputation as a climate leader, he must use his authority to manage public lands and waters according to climate science, not oil industry profits.”

“While as a candidate Joe Biden campaigned on the promise to end oil and gas leasing on public lands, the Department of the Interior continues to hold lease sales at the expense of frontline communities, ecosystems, and our climate,” said Dan Ritzman, Lands Water Wildlife Director at the Sierra Club. “We urge the administration to phase out dirty drilling, allow our lands to be part of the climate solution, and ensure the next generation can inherit a habitable planet.”

“The climate crisis demands action commensurate with the magnitude and urgency of the problem, and the Biden administration continues to think we can drill our way to a solution,” said Kyle Tisdel, Climate & Energy Program director at the Western Environmental Law Center. “Not only is this approach detached from reality, it continues to sacrifice frontline and Tribal communities that have already endured generations of exploitation from the extraction of federal oil and gas resources. It’s time to stand up to the oil barons and usher in a just transition to a clean energy future.”

“A climate where public lands and waters are clear from fossil fuel pollution is a climate where all children can prosper and thrive,” said Beth Shipp, executive director of Mothers Out Front. “This must remain at the forefront of the Biden Administration’s priorities and it’s vital these steps phase out oil and gas production and protect public lands are taken to protect children’s future.”

“Biden’s aggressive pro-drilling policies are a disastrous failure of climate leadership and make a mockery of his campaign promises,” said Taylor McKinnon with the Center for Biological Diversity. “Climate science demands immediate executive action phasing out federal oil, gas, and coal production. Biden’s grandchildren are depending on him to walk his talk.”

“By re-starting aggressive oil and gas leasing of our public lands and waters, the Biden administration has chosen to put at additional risk the overburdened Colorado River water supply system, which supports 1 in 10 Americans, seven states, two nations, and thirty Native American tribes,” said Marc Yaggi, CEO of Waterkeeper Alliance. “Continued fossil fuel extraction, and the inevitable impacts to our climate, rivers, and communities, directly contradict U.S. climate pledges and push us in the wrong direction.”

“Big Oil has made enormous profits from drilling on public lands and waters. All taxpayers have received in return is continued damage to the climate, and with no meaningful relief from high gasoline prices. Meanwhile, fossil fuel giants are actively pushing up home heating costs by building huge pipelines and export terminals to export methane gas from the U.S. and sell it abroad,” said Lisa Gilbert, executive vice president of Public Citizen. “The Interior Department has the power to rein in Big Oil’s harmful exploitation of lands and waters owned by the American people. It must act quickly to protect the planet and not fossil fuel corporation profits.” 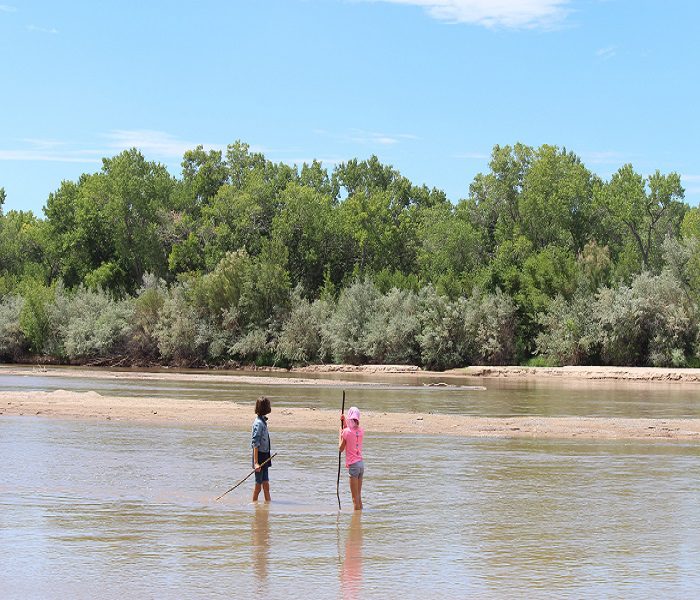 Kids at play in the Rio Grande. Photo by Jen Pelz