Wildlife   Lesser prairie chicken
#EndangeredSpeciesAct, #PressStatement
WASHINGTON, D.C.–The U.S. Fish and Wildlife Service (the “Service”) yesterday announced its final decision to list the lesser prairie-chicken, a rare and charismatic grassland grouse, under the Endangered Species Act (“ESA”). The decision stems from a 2019 settlement agreement, following a lawsuit brought by WildEarth Guardians and partner organizations over the Service’s failure to act on a 2016 listing petition.

“We’re relieved the lesser prairie-chicken finally has real protections,” said Joe Bushyhead, endangered species attorney with WildEarth Guardians. “These birds are disappearing across their range. The ESA provides the single best tool for preventing extinction, so we’re optimistic listing will provide a lifeline and a path to eventual recovery.”

The different designations will mean different levels of protection. An “endangered” population automatically receives protection from “take,” a term broadly defined by the ESA which means “to harass, harm, pursue, hunt, shoot, wound, kill, trap, capture, or collect.” For a threatened population, however, the Service has the ability to allow certain kinds of incidental take using what is called a “4(d) rule,” as long as the allowances do not impede recovery.

The Service has not yet released its 4(d) rule for the threatened Northern DPS (release is slated for November 25). But in a press release, the Service forecasted exceptions for killing or harming birds due to livestock grazing–even though grazing has been a main driver of lesser prairie-chicken population and habitat loss.

“We will review the 4(d) rule closely and evaluate if additional steps need to be taken to ensure the Northern DPS receives sufficient protections, ” said Bushyhead.

Like other western grouse, lesser prairie-chickens are known for their showy mating displays. The birds congregate at breeding grounds called leks, where the males confront each other to defend their territories and court females. The males flutter, jump, stamp their feet, display bright yellow eye combs, and inflate red air sacs to produce distinct booming calls.

Lesser prairie-chickens depend on large expanses of unfragmented native prairie. But cropland conversion, livestock grazing, oil and gas drilling, and other development has destroyed and fragmented this once-abundant habitat, leading to serious and protracted population declines. Once numbering in the millions and spanning the southern Great Plains, the Service now reports that prairie-chicken habitat has declined by 90% compared to historical range. Only approximately 32,210 birds remain. 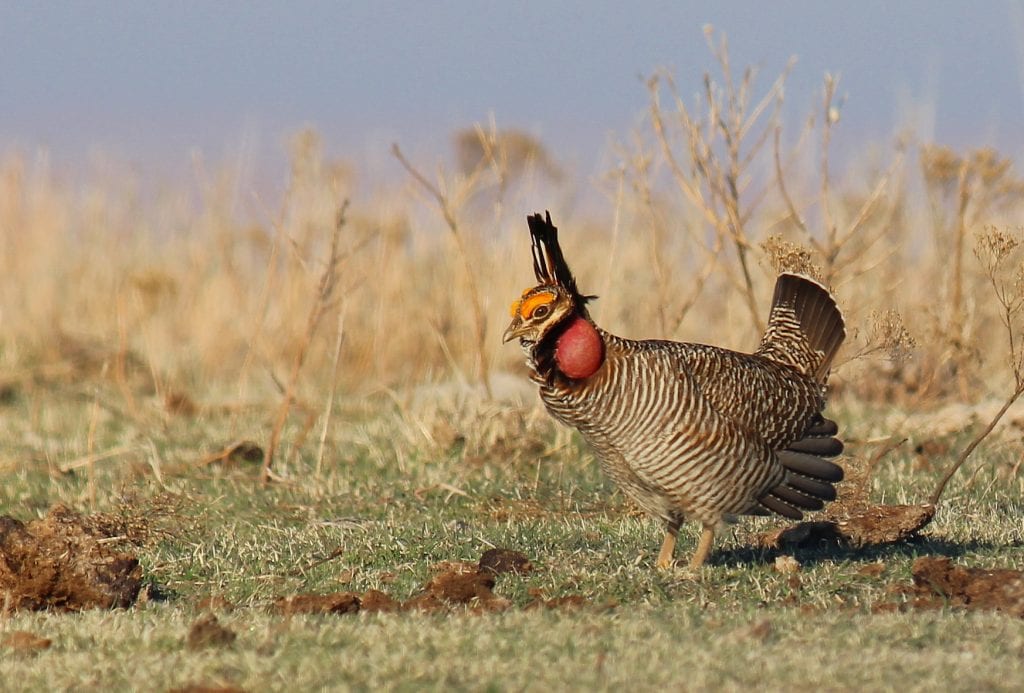