Selling public lands to the oil and gas industry is absolutely, 100% guaranteed to keep fueling the climate crisis

Today’s protests say the U.S. Bureau of Land Management isn’t legally required to conduct lease sales and that its plans fail to prevent climate pollution and harm to people and the environment. The leasing plans also ignore the incompatibility of federal fossil fuel expansion with the U.S. goal of avoiding 1.5 degrees Celsius of global warming, the groups say.

The protests, which cite harm to people, air, water, public land and wildlife like the embattled greater sage grouse and other endangered species, call for a halt to federal fossil fuel leasing and a nationwide programmatic environmental review to align federal fossil fuel management with the goal of avoiding climate change’s most catastrophic effects.

Several analyses show that climate pollution from the world’s already-producing fossil fuel developments, if fully developed, would push warming past 1.5 degrees Celsius, and that avoiding such warming requires ending new investment in fossil fuel projects and phasing out production to keep as much as 40% of developed fields in the ground.

Thousands of organizations and communities from across the United States have called on President Biden to halt federal fossil fuel expansion and phase out production consistent with limiting global warming to 1.5° Celsius.

The administration’s promised comprehensive climate review of the federal oil and gas programs under Executive Order 14008 culminated in a Black Friday report that mentioned climate only twice and proposed modest royalty rate increases and other changes that presume no end to federal oil and gas leasing. The Biden administration approved more drilling permits in 2021 than President Trump did in the first year of his presidency.

The June lease sales come amid record oil and gas industry profit-taking. The watchdog organization Accountable.US reported in February that Shell, Chevron, BP and Exxon made more than $75.5 billion in profits in 2021 — some of their highest profits in the past decade. Major oil companies also reported billions in profits in the first quarter of 2022.

“Montana is in the throes of major climate change impacts, including less water in our rivers, more intense wildfires across the state, and a prolonged and an intense drought over much of our landscape,” said Derf Johnson, staff attorney with the Montana Environmental Information Center. “The Biden administration’s decision to continue leasing our public lands for fossil fuel extraction flies in the face of his stated goal to reduce emissions and address the climate crisis.”

“The West is on the verge of another Dust Bowl. We are in the nation’s climate hotspot, disproportionately impacted by climate change, having warmed double the global average, more than 2 degrees Celsius,” said Natasha Léger, executive director, Citizens for a Healthy Community. “Climate leadership means ending new oil and gas leasing that just locks in more climate catastrophe. A lease sale in areas that have already warmed 1.5 degrees Celsius is beyond reckless.”

“Avoiding catastrophic climate change requires no more fossil fuel expansion anywhere, starting now, including on public lands,” said Taylor McKinnon with the Center for Biological Diversity. “Each new oil lease is a choice for more megafires, drier rivers, worsening heat waves and hastened extinctions. The president should use his power to keep his climate promise and end fossil fuel leasing on public lands and waters.”

“Selling public lands to the oil and gas industry is absolutely, 100% guaranteed to keep fueling the climate crisis,” said Jeremy Nichols, climate and energy program director for WildEarth Guardians. “President Biden’s belief that we can open the door for more fracking and protect our climate is simply out of touch with truth, reality, and what’s right.”

“Public lands and minerals should be managed for the public benefit, not to maximize the profits of fossil fuel corporations,” said Erik Molvar, executive director of Western Watersheds Project. “Wildlife from sage grouse to elk and pronghorn are harmed by drilling on public lands, and so is the global climate, so one necessary solution to both the climate crisis and the biodiversity crisis is to stop leasing the public’s minerals to fossil fuel corporations. The highest and best use of federal coal, oil, and gas deposits is to keep them safely sequestered underground.”

“The administration’s attempt to take a more nuanced approach to federal fossil fuel development may be politically convenient, but it ignores scientific reality: for a 50/50 shot at avoiding the 1.5°C threshold, nearly 40% of currently-producing or under-construction fossil fuel reserves must stay in the ground” said Melissa Hornbein, senior attorney at the Western Environmental Law Center. “Even if that 40% is kept underground, our odds of staying below 1.5°C are worse than a game of Russian Roulette. Why is the government rigging this dangerous game of speculation in favor of the oil industry, when a livable climate is at stake? The science is clear: there is simply no room for additional oil and gas leasing.”

“Tens of thousands of people have spoken up against drilling on public lands. And now it’s up to the BLM to listen and put an end to leasing once and for all,” said Dan Ritzman, lands, water and wildlife director at the Sierra Club. “For far too long our public lands have been monopolized by the oil and gas industry, leaving behind toxic pollution in their wake, harming local communities, wildlife, and our special places. As we come dangerously close to reaching the 1.5C threshold, it is critical we keep fossil fuels in the ground. It’s time for our public lands and waters to be part of the climate solution, not the problem.”

“Only raising royalty rates ignores the quarter of all U.S. climate emissions caused by fossil fuel extraction on public lands, as well as the climate costs shifted onto society,” said Nicole Ghio, senior fossil fuels program manager at Friends of the Earth. “If Biden wants to be a real climate leader, he must keep his promise to end new oil and gas drilling, not turn over more public lands to Big Oil when there is no legal obligation to do so.”

“In spite of candidate Biden’s promises to ban new oil and gas extraction on federal lands, his administration is doing the opposite,” said Daniel E. Estrin, general counsel and advocacy director for Waterkeeper Alliance. “If stopping catastrophic climate change is truly a key administration priority, it’s irrational to lease nearly 150,000 additional acres of public lands to Big Oil. We again call on the president to keep his promises, and for his administration’s actions to match its climate messaging.” 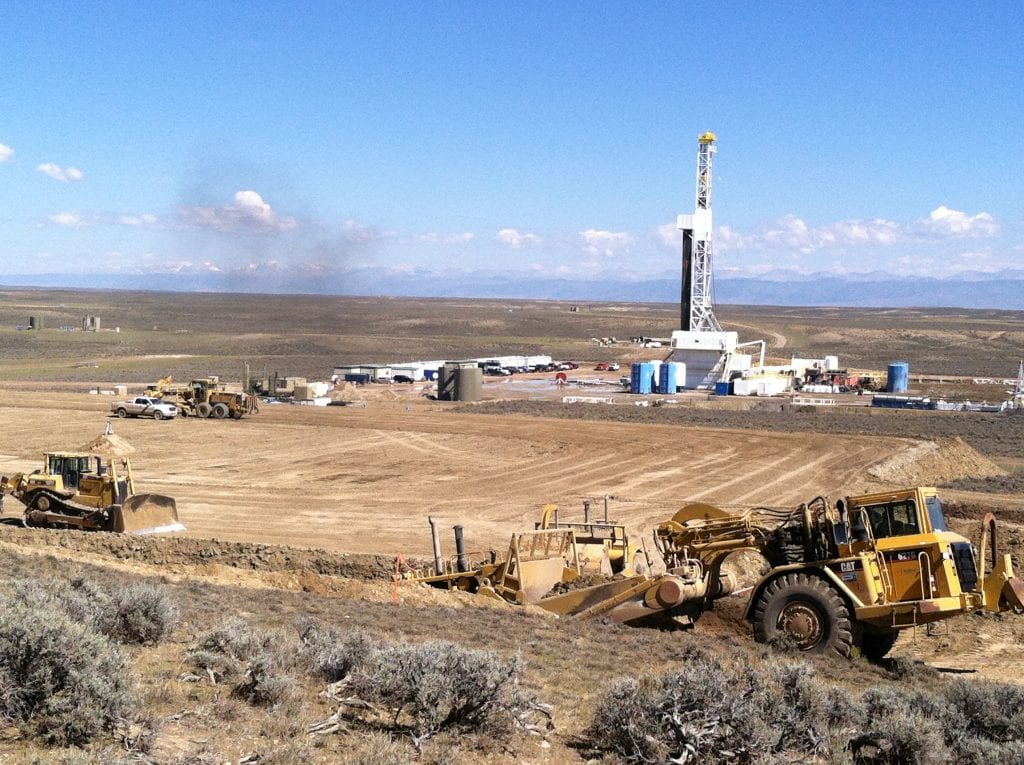 Fracking on public lands in Wyoming. Photo by WildEarth Guardians.