The groups petitioned the U.S. Fish and Wildlife Service to protect the birds in September 2016. The agency promised to make a decision on that protection by the end of summer 2017, but failed to do so.

“The Trump administration’s foot dragging is placing these unique, dancing birds at serious risk of extinction,” said Noah Greenwald, endangered species director at the Center. “The Endangered Species Act has saved more than 99 percent of the species under its protection. It can save the lesser prairie chicken too, but only if the birds are listed as a threatened or endangered species.”

In 2014 the Fish and Wildlife Service listed the lesser prairie chicken as threatened. But protection was overturned on procedural grounds after a lawsuit from the Permian Basin Petroleum Association and four counties.

The bird lives in Colorado, Kansas, New Mexico, Oklahoma and Texas. It is severely threatened by habitat loss and fragmentation caused by oil and gas development, cropland conversion, livestock grazing and roads and power lines.

In addition to habitat loss, the lesser prairie chicken is threatened by climate change. The summer of 2011 saw some of the hottest and driest conditions on record in the Southern Plains, with ground temperatures exceeding 130 degrees Fahrenheit, a critical threshold above which lesser prairie chicken eggs cannot survive.

The following year prairie chicken populations plummeted to their lowest levels in decades. Overall, global warming is expected to drive a four-fold increase in the number of 100-plus degrees days on the Southern Plains.

The lesser prairie chicken — an icon of the Southern Plains — once numbered in the millions but has declined to just roughly 38,000 birds across less than 17 percent of its original range. Experts estimate the population of lesser prairie chickens at 3 million birds before the beginning of Euro-American settlement on the Great Plains.

The petitioners are WildEarth Guardians, Defenders of Wildlife and the Center for Biological Diversity.

The Center for Biological Diversity is a national, nonprofit conservation organization with more than 1.4 million members and online activists dedicated to the protection of endangered species and wild places.

Defenders of Wildlife is dedicated to the protection of all native animals and plants in their natural communities. With over 1.8 million members and activists, Defenders of Wildlife is a leading advocate for innovative solutions to safeguard our wildlife heritage for generations to come. For more information, visit Newsroom.Defenders.org and follow us on Twitter @DefendersNews.

WildEarth Guardians protects and restores the wildlife, wild places, wild rivers, and the health of the American West. 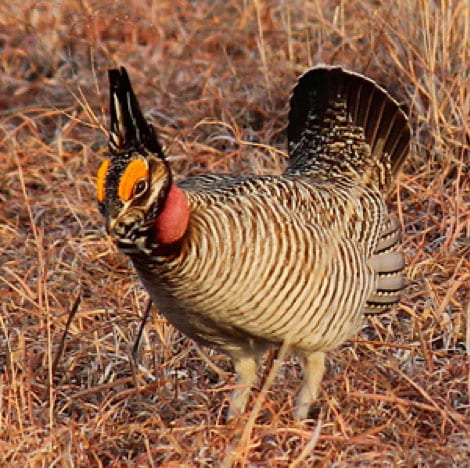 Photo courtesy USFWS. This photo is available for media use.