Santa Fe, New Mexico—Today marks the last federal oil and gas lease sale to be held under the Trump administration, an effort to sacrifice nearly 7,000 acres of public lands in New Mexico, where the oil and gas industry has aggressively demanded the right to frack the sacred Greater Chaco region and pushed to drill at unprecedented levels in the Permian Basin.

Heralding a new era, today representatives from Pueblo Action Alliance, WildEarth Guardians and other members of the Greater Chaco Coalition unfurled a timeline of “Extractive Colonialism and Indigenous Resistance in New Mexico” in front of the Bureau of Land Management State Office in Santa Fe.

“Today we are demanding that the new Biden administration address the legacy of extractive colonialism in New Mexico, the stolen ancestral lands of the Pueblo, Dine and Apache people,” said Julia Bernal, Director of Pueblo Action Alliance. “When we say ‘ban federal fossil fuel leasing’, we actually mean building back from the harm and violence inflicted on the land and on the people. We must give the land and water a chance to regenerate from oil and gas, coal and uranium waste. We demand a just transition to a cleaner energy economy that puts the land and the people over capitalism. We demand that Indigenous sovereignty and self determination be respected in land and water management plans. We must also respect the Indigenous resistance against colonialism and those who continue to fight to protect our ancestral landscapes. Protecting areas like the Greater Chaco region helps to ensure that our culture continues for the next generations.”

Under Trump, the sale of public lands for fracking in New Mexico has drawn widespread and persistent condemnation from elected officials, Tribes, youth, communities, and many others. The  U.S. Department of the Interior’s Bureau of Land Management has not only ignored Tribal demands for a moratorium on selling lands in the Greater Chaco region, but also denied that authorizing more fracking in the Permian Basin has any consequences for the climate.

While today’s sale has again drawn outrage and protests, including additional legal challenges, it also marks an extremely hopeful new chapter in the future of how federal oil and gas will be managed.

“No place exemplifies the need for a ban on sacrificing public lands for oil and gas then in New Mexico,” stated Rebecca Sobel, senior climate and energy campaigner for WildEarth Guardians. “Trump has made it a goal to sell as much public land as possible for fracking over the last four years, but thankfully after today, the administration’s pro-fossil fuel, climate and science denying, anti-public agenda will finally come to an end.”

President-elect Joe Biden has made clear that banning the sale of public lands for fracking will be a key tenet of his administration, and Department of Interior Secretary-elect Deb Haaland signals a hope for amending the federal fossil fuel program as she’s made protection of the Greater Chaco region a priority, a proxy for safeguarding other sacred and irreplaceable cultural landscapes.

A coalition of more than 500 groups have called on the Biden Administration to #BuildBackFossilFree and end federal fossil fuel leasing.

“The era of extractive colonialism must end. The new administration must take to heart the need to confront the climate crisis, as well as the need to learn from the past,” added Bernal.  “We can’t frack our way to a safe climate and nowhere is that more obvious and apparent than in New Mexico.” 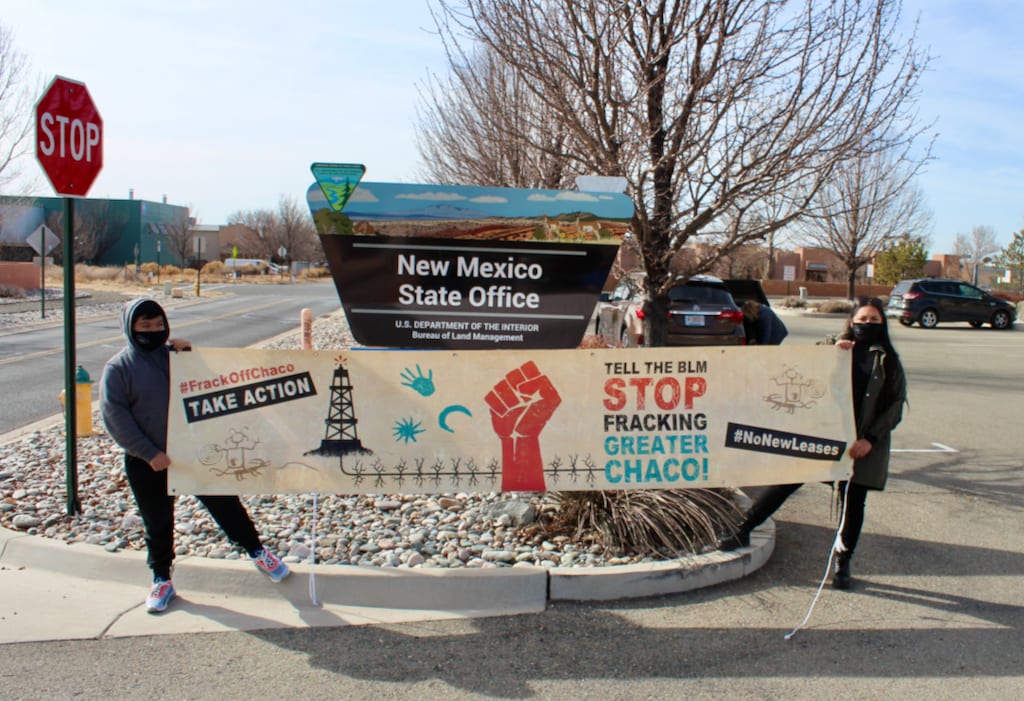