Wolf brew will be released to the public on Thursday, September 15

Wildlife   Gray wolf
#PressStatement, #StopExtinction
MISSOULA, MONTANA—Imagine Nation Brewing Company and WildEarth Guardians have teamed up to create Wolf Hearted IPA. The specialty beer will be released to the public on Thursday, September 15 at the brewery (1151 W Broadway St.) with WildEarth Guardians’ Missoula staff members present for a special event from 4 to 8 pm. Wolf Hearted IPA will be available on tap at the brewery and also available in a “wolf pack-four pack” at the brewery and at select locations across Missoula.

“Wolf Hearted IPA raises awareness about the decimation of wolves in Montana and surrounding Yellowstone National Park after the gray wolf was delisted from the Endangered Species Act,” explained Tim Graham, co-owner of Imagine Nation Brewing. “The purpose of this beer is to raise awareness so that gray wolves are once again protected and respected.”

“We are very grateful to Imagine Nation for brewing Wolf Hearted IPA and their partnership to call attention to the dire situation facing gray wolves across Montana and the Northern Rockies,” said Sarah McMillian, WildEarth Guardians’ senior advisor. “Another brutal and difficult wolf trophy hunting and trapping season is starting in Montana, so we encourage those who have the wolf in their heart to join us at the brewery on September 15, raise a glass for wolves, and learn how they can take action to protect these beautiful creatures.”

The beautiful 16-ounce can features this message: “After losing Endangered Species Act protections in the Northern Rockies, wolf packs have been decimated—including the storied wolves of Yellowstone National Park. WildEarth Guardians knows that the public can make a difference in this fight. This beer is an invitation to every lover of the wild: raise a glass, have the heart of a wolf, and take action at WildEarthGuardians.org.”

Imagine Nation has been a house of dialogue for nearly seven years. After hosting over 4,000 community events, supporting over 500 organizations, and giving back up to 25% of their net profit to the community, the brewery has used beer as a vehicle to bring people together over the challenges that face us as humanity. 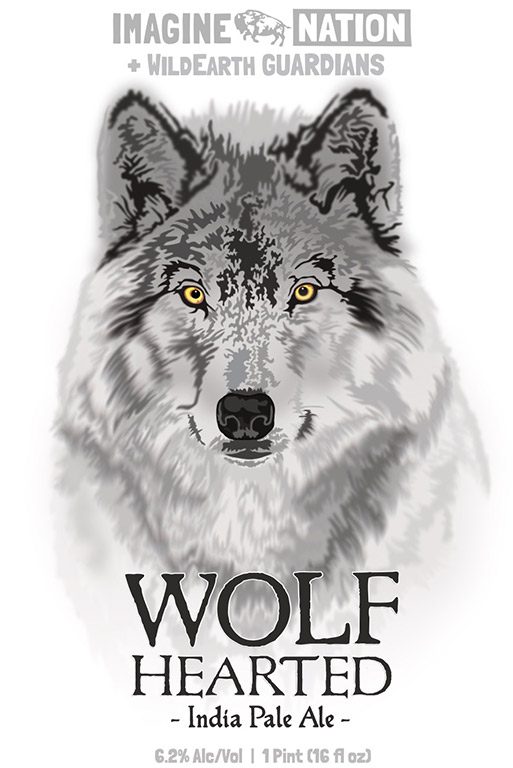