WASHINGTON, DC—As Congress considers infrastructure packages to Build Back Better, conservationists urge legislators to include authorization and funding for the Legacy Roads and Trails program that will address the crumbling road infrastructure on national forest lands and ensure that the road network can sustain an increase in the recreating public as well as the effects of a changing climate. Groups are pleased to see authorization and funding of the program included in infrastructure proposals.

“National Forests play a key role in this nation’s water infrastructure providing drinking water to communities from Alaska to Florida and stream habitat for brook trout to salmon and more,” said Marlies Wierenga, Pacific Northwest conservation manager for WildEarth Guardians. “In this era of water scarcity and excessive heat, the Legacy Roads and Trails program should be a logical bi-partisan investment to safeguard important headwaters.”

The Legacy Roads and Trails (LRT) program, initially established in 2008 (and subsequently defunded in 2018), proved to be an effective, no-waste program with demonstrated results. In that decade, the program provided employment for an average of 900 Americans annually; made urgent repairs to over 18,000 miles of forest roads and 5,000 miles of trails; improved over 1,000 stream crossings for fish passage and storm resilience; fixed 137 bridges for safety; and reclaimed 7,000 miles of unneeded road. This program has a proven track record of saving taxpayer money, improving habitat, creating jobs, and guaranteeing safer access for all.

“For more than ten years, the Legacy Roads and Trails program has successfully aided the Forest Service in addressing critical road issues from maintenance to stormproofing to retirement,” said Anders Reynolds, Federal Legislative Director for the Southern Environmental Law Center. “What’s more, because this work primarily takes place in the field, LRT has meant good-paying jobs even as it has provided for cleaner water and improved habitat.”

The U.S. Forest Service manages a massive road and trail system on behalf of the American public, including more than 370,000 miles of roads, 159,000 miles of trails, hundreds of thousands of culverts, and more than 13,000 bridges. With twice as many miles as the national highway system, the Forest Service road system demands considerably more maintenance attention than current funding allows; the deferred maintenance backlog grows every year. The Forest Service currently reports an astounding $3.2 billion road maintenance backlog. As this infrastructure network deteriorates, people lose access, fish and wildlife are harmed and water is polluted.

“The Forest Service has hundreds of thousands of miles of deteriorating roads and trails that we must address,” said Blaine Miller-McFeeley, senior legislative representative at Earthjustice. “The Legacy Roads and Trails program will invest needed dollars and give shape to an initiative that will help protect the population of everything from grizzly bears to bull trout, not to mention strengthening our forests for carbon sequestration. This program is the right one to ensure our forests are climate resilient, and Earthjustice is proud to support it.”

The Legacy Roads and Trails program provides funding to stormproof roads and trails so that they can withstand more intense storms anticipated with climate change without polluting waterways, remove or expand undersized and blocked culverts to allow fish to migrate unimpeded and decommission obsolete roads to preclude harmful effects to wildlife and the environment.

“The Legacy Roads and Trails program has been a success story for threatened and endangered species and recreationists across the country,” said Robert Dewey, vice president for government relations, Defenders of Wildlife. “The program restores fish habitat, improves access to national forests and creates high-paying jobs in the process. This is an infrastructure investment that’s a win-win for wildlife and people.”

Re-establishing funding for this program that addresses severely damaged fish and wildlife habitat in national forests and grasslands will provide jobs to rural communities that are struggling to cope with the current economic recession. Most of the funding in the program goes directly to on-the-ground work supporting local contractors and specialists. Heavy-equipment operators are particularly well poised to benefit from the program.

“Right-sizing our national forest system road network is essential to ensuring healthy, functioning wildlife habitat, clean water for recreation and public consumption, and resilient landscapes that can respond to a changing climate,” explained Susan Jane Brown, Wildlands Program Director with the Western Environmental Law Center. “WELC is therefore pleased to see proposals for funding the Legacy Roads and Trails Program as part of the national conversation on infrastructure.” 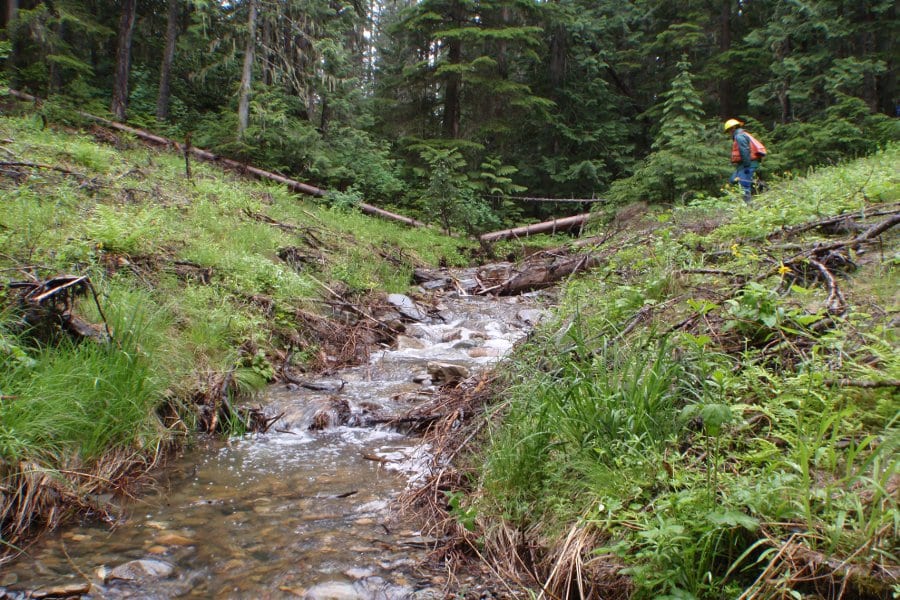 Legacy Road and Trails Program funding was used on the Kootenai National Forest in Montana to remove an old culvert and reconnect this stream for migrating fish. Photo by Adam Switalski.