Climate + Energy
#COCleanAir, #JustTransition, #KeepItInTheGround
Denver–Groups representing thousands of Coloradans have called into question why Xcel Energy, the state’s largest utility who has longed positioned themselves as a climate leader, has moved to join litigation to slow climate action in Colorado.  The diverse coalition of environmental, justice, health, and climate advocacy groups offered statements below.

Xcel Energy has long lifted themselves as a climate leader by investing in renewable energy and electrifying the transportation grid—but taking legal action that advocates to slow Colorado’s progress towards its climate goals is not climate leadership. Xcel is now the state’s only utility that has not committed to retiring all coal-fired power by 2030.

“This isn’t leadership on climate, this is an affront to Colorado’s efforts to confront the climate crisis and curtail greenhouse gas pollution. With its latest legal motion, Xcel seems to be showing us all that its goal is to stymie and slow climate progress, not to advance bold action for the climate in the state.”

“Xcel has disappointed us greatly. They have held us hostage as they pump greenhouse gases into colorado. As they support  things can only hurt us. No longer. Xcel says they care about us, about Colorado but we know they only care about themselves. We have seen the health effects of GHG emissions and the effects it has on our earth, on our bodys we are running out of time. They have no excuses left. I am a youth in CO my life is on the line. as they refuse to stop we feel attacked and hurt. Xcel is being a child and they must be held to their responsibilities”.

“Scientists have made it clear that if we want any chance of staying below 1.5C warming we must be almost completely decarbonized by 2030. (See Reality Check: Climate 2020)  Xcel should be focusing on more rapidly decarbonizing their electric system by 2030 or sooner, instead of using their vast legal resources to slow our climate efforts down.”

“Decarbonizing Colorado’s electricity supply quickly is the most cost-effective route toward meeting our greenhouse gas pollution reduction goals and doing our part to protect the climate.  Xcel needs to step up to the plate and help, rather than hinder this effort.”

“Independent studies such as the recent one by GridLab, Sierra Club, and NRDC show utilities need to close coal by 2025 and get to around 75% renewable electricity by 2025.  This should be the baseline for their planning. Thus far, Xcel has been doing their utmost to delay the shift, as here, and maximize what remaining profits they can squeeze out of their old model, to the harm of we who actually live in Colorado.  Despite their advertising, their fossil fuel plants are no longer the most affordable, safe, or reliable path forward. Their largest coal plant was down for repairs almost all year.”

“Moms in Colorado are really disappointed in Xcel. We had hoped their Transportation Electrification Plan was a sign that they were going to work with us to lower our carbon

emissions and protect our children’s future but joining this lawsuit will only serve to slow down our climate action. It’s like when you think your kid has done something really nice and made you a snack but then you find worms in it.”

“Continuing to operate coal facilities and gas plants like Cherokee in overburdened frontline communities is part of Xcel’s current plan. We need Xcel to focus on decarbonization and just transition for the health of the planet and local communities as fast as possible instead of coming to the defense of climate inaction.”

“The Denver Metro North Front Range continues to be plagued by poor quality air during a pandemic that affects the health of everyone living here.  It is disappointing that Xcel continues to remain a roadblock to progress to address poor air quality.  Instead of intervening to delay the transition to renewable clean energy, they should focus their efforts and resources on being part of the solution.”

“The people spoke in 2019, they want real reductions in GHGs.  It’s an imperative if we are to play our part in saving the planet.  The first step said the people and their representatives is a 26% in such pollution by 2025.   It is up to Governor Polis to translate that command into action.  So far he has been missing in action.  Even a first grader knows you can’t make 4 into 3 unless you subtract 1.  Polis must have missed the lesson on subtraction.  Mostly, he’s been running the state by press release.  That doesn’t work.  He needs to get his hands dirty and tell the polluters their days are numbered, that subtraction is part of their future.  It’s the law.”

“On the heels of the worst wildfire season on record Coloradans deserve climate leadership from the states largest utility, Xcel Energy.”

“Generating clean and healthy power for Colorado families and communities is a key step in meeting our statewide emissions goals. As the largest provider of electricity in Colorado, Xcel Energy has a responsibility to help us lead a just and equitable transition to renewable energy sources,” said Ren Smith, organizer at the Sierra Club in Colorado. “Instead, Xcel is clinging to costly and dirty power plants, often located in vulnerable, low-income communities of color. Our utility needs to stop using ratepayer dollars to exacerbate the climate crisis with its polluting plants.”

“Xcel has shown consistent disregard for the health of the planet and people. Xcel is Dirty there is no way around that. We need the government to get this monopoly in line, closing coal by 2025 and getting from 70% dirty this past year to 75% clean by 2025, not having the Governor indebted to them for helping with his lawsuit.”

“In facilitating meditations, I often urge people to understand our connection with the world around us, and to not avoid or run away from what is happening. I urge Xcel to do the same, listening to the clear scientific consensus that reliance on fossil fuels has led us to dramatically alter the world that supports us. But working in partnership with Colorado and local communities, Xcel can help transition to an economy that is financially, environmentally, and socially sustainable.”

“We need clean air, and Unite North Metro Denver neighborhoods haven’t been getting it.  Instead, we have a utility that is close to 70% dirty and wants to stay that way as long as it can, pulling as much money as it can, out of Colorado.  Now it is even trying to intervene to help the state avoid its obligations!  Instead our leaders, from Gov. Polis to his appointees, should simply follow the law.  That’s the right thing to do.” 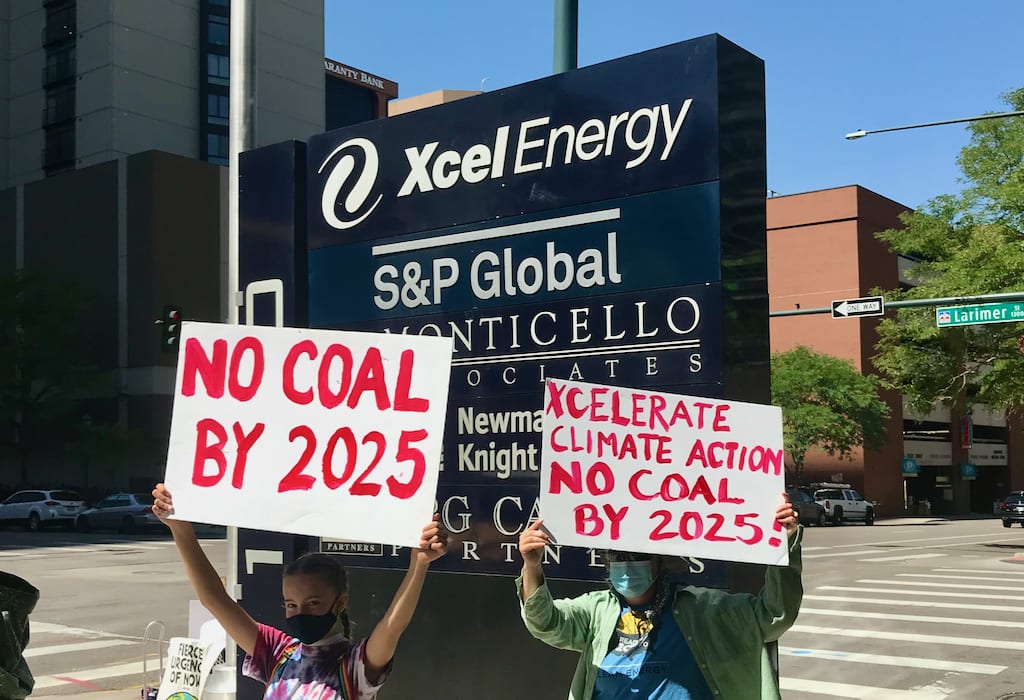