Climate + Energy
#JustTransition, #KeepItInTheGround
DENVER— A federal judge this week overturned a U.S. Bureau of Land Management decision to sell 58,000 acres of public land in western Colorado for oil and gas extraction, agreeing with conservation groups that fracking and drilling will worsen air quality in a region where smog levels have exceeded federal pollution standards and threaten public health.

“The court’s decision sends yet another clear signal that the federal oil and gas leasing program continues to discount the serious impacts of oil and gas extraction on public health and the environment,” said Matt Nykiel, climate and energy program attorney with WildEarth Guardians. “There’s more reason than ever for the Interior Department to initiate a comprehensive review of the program without delay before proceeding with any additional lease sales.”

U.S. District Judge Marcia S. Krieger in Colorado also found that federal officials under the Trump administration ignored new information that the area included lands with wilderness characteristics and relied on an outdated analysis, violating federal environmental laws. The wild landscapes include undeveloped areas near Dinosaur National Monument that are entitled to protection. The judge sent the leases back to the Bureau of Land Management (BLM) for additional review.

“This is a huge win for public health and the wild places of Colorado that deserve protection,” said Diana Dascalu-Joffe, a senior attorney at the Center for Biological Diversity. “The judge’s careful ruling honors the people who breathe this dangerous air every day. Fossil fuel extraction poses a grave threat to everyone, particularly the most vulnerable. It’s a disaster for people and the planet.”

“It’s a breath of fresh air to have the court uphold the hard look mandates at the core of the National Environmental Policy Act,” said Matt Sandler, staff attorney for Rocky Mountain Wild, “We sincerely hope the agency will take this opportunity to conduct lawful analysis and decide against harmful energy development in these areas.”

The BLM was required to analyze and address potential harms to human health and landscapes before leasing the 58,000 acres in June 2018. The agency skipped this analysis and ignored its own air quality modeling showing exceedances of air quality standards—a clear error that violates the National Environmental Policy Act. In September 2018 a coalition including Earthjustice, WildEarth Guardians, Rocky Mountain Wild, National Parks Conservation Association, and the Center for Biological Diversity, sued to challenge the lease sales, leading to the court’s ruling.

“These leases are not only a threat to Dinosaur National Monument, local communities and the climate, but have now been found to be unlawful,” said Tracy Coppola, senior Colorado program manager for the National Parks Conservation Association. “The previous administration had recklessly cut corners in its rush to hand public land over to oil and gas corporations. This court decision has thankfully remanded these leases, but the Biden administration must now finish the job and revoke them permanently.”

“The court’s ruling is clear: the Trump administration violated the law in its headlong rush to lease public lands for oil and gas development,” said Stu Gillespie, senior attorney with Earthjustice. “It is now time for the Biden administration to right that wrong by revoking the leases and fulfilling its promise to protect our public health, safeguard our treasured lands, and address the accelerating climate crisis.” 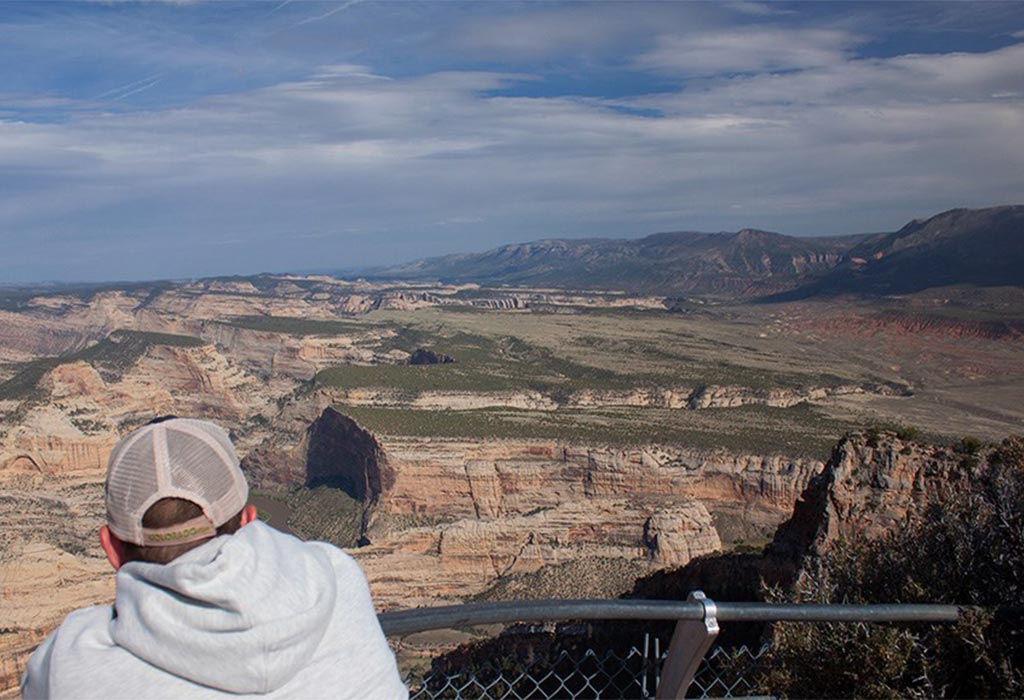 An overlook at Dinosaur National Monument. Photo by NPS.