The law is clear, the oil and gas industry doesn’t have a right to frack public lands

In his ruling Friday, U.S. District Judge Scott Skavdahl rejected arguments by industry and Wyoming and found that the Bureau of Land Management (BLM) acted within its legal authority under the Mineral Leasing Act, National Environmental Policy Act (NEPA), and other laws when it postponed lease sales to ensure that it fully considered the environmental harms they could cause. The court also held that BLM and Wyoming lacked standing to challenge the postponement of certain 2021 sales.

“We’re pleased the Judge affirmed the Department of the Interior has significant discretion to decide when to offer public oil and gas resources at lease sales. The law requires Interior to serve the public interest by analyzing and considering the environmental and social costs of leasing before holding lease sales, and that’s what they did,” said Bob LeResche, Powder River Basin Resource Council board member from Clearmont, Wyoming. “Last year BLM initiated a comprehensive review of the federal oil and gas program, and this is the perfect time for the Department to complete their review and fully reform the federal oil and gas program to better protect taxpayers, communities, and the environment. We call on them to do so.”

In early 2021, the Biden administration issued an executive order aimed at tackling the climate crisis, which directed the Department of the Interior to temporarily pause new oil and gas leasing on federal lands and offshore waters. The pause was meant to provide the federal government an opportunity to undertake a systematic review of its oil and gas program and consider how to address its climate impacts. Before the Interior Department could decide how to implement the executive order, it was targeted in five lawsuits filed by industry trade associations and Republican-led states.

Friday’s ruling came in two of those lawsuits, brought by the state of Wyoming, Western Energy Alliance (WEA), and the Petroleum Association of Wyoming. Earthjustice and the Western Environmental Law Center (WELC) intervened on behalf of 21 groups to defend the lease sale postponements and leasing pause.

“This ruling is a victory for people who cherish public lands, and the communities whose livelihoods are intertwined with these special places,” said Ben Tettlebaum, senior staff attorney with The Wilderness Society. “The court rightly affirmed that our public lands are not up for a fire sale to the fossil fuel industry whenever it chooses. The Interior Department has the clear authority to manage these lands for conservation, wildlife, and the health and well-being of communities who rely on them.”

“We find it reassuring that the court affirmed the Bureau of Land Management’s authority to postpone oil and gas lease sales in order to make certain they adhere to the law,” said Melissa Hornbein, senior attorney at the Western Environmental Law Center. “The judge called out as nonsensical the state and industry group’s argument that postponing a lease to ensure compliance with the National Environmental Policy Act (NEPA) requires a NEPA analysis of its own. This suggests any appeal of this decision will have an uphill battle in court.”

The Wyoming ruling follows an August 18 ruling from the Western District of Louisiana that permanently blocked a blanket leasing pause in 13 states (not including Wyoming) that sued over the executive order in Louisiana District Court. The Louisiana ruling came one day after the 5th U.S. Circuit Court of Appeals overturned a preliminary injunction previously issued by the Louisiana court, finding that it lacked adequate “specificity.” Similar to the Wyoming decision, however, the August 18 Louisiana ruling appears to permit the government to postpone sales based on National Environmental Policy Act (NEPA) and other concerns.

“Given the climate crisis and its superstorms, floods, fires, and droughts, it’s essential that the President have the authority to control oil and gas leasing – or deny leasing – on mineral deposits owned by the American people,” said Erik Molvar, executive director with Western Watersheds Project. “Friday’s ruling puts the federal government back in the driver’s seat for managing federal mineral deposits and paves the way for keeping oil and gas in the ground.”

“BLM has never adequately considered the impacts of its fossil fuel leasing program on climate,” said Peter Hart, attorney at Wilderness Workshop. “Courts across the country have found BLM’s leasing decisions illegal based on this failure. This opinion confirms that BLM doesn’t have to continue selling leases that don’t comply with law. Instead, the agency should STOP and consider the real impacts of more leasing. After that, we may all agree: ‘it isn’t worth it!’”

“The climate induced disasters keep stacking up, from mega droughts and catastrophic floods to wildfires and unhealthy air. Business as usual is not working,” said Anne Hedges, director of policy for the Montana Environmental Information Center. “The President simply must have the ability to take the time necessary to find a better path forward. People’s lives, livelihoods and our public lands depend on getting this right. This pause is a small step in the right direction.”

“The court reaffirmed the federal government’s long-standing obligation to protect the environment and public interest, not just sell off lands when demanded by oil and gas companies,” said Michael Freeman, senior attorney with Earthjustice’s Rocky Mountain Office. “We hope the Biden administration will exercise that authority to limit new oil and gas leasing and avoid the worst impacts of the climate crisis.”

“This welcome decision affirms that the Biden administration has wide latitude to rein in federal fossil fuels,” said Taylor McKinnon with the Center for Biological Diversity. “Allowing any new fossil fuel projects, including oil and gas leasing, is incompatible with avoiding catastrophic climate change. The administration still has much work to do to bring federal fossil fuel production to a swift and orderly end.”

“The law is clear, the oil and gas industry doesn’t have a right to frack public lands,” said Jeremy Nichols, WildEarth Guardians’ Climate and Energy program director. “And given our climate crisis, it’s more critical than ever to ensure the industry is not fracking public lands.”

“This decision shows that the Department of Interior is not beholden to the fossil fuel industry, as many states and industry groups have alleged,” said Adam Carlesco, staff attorney with Food & Water Watch. “Given this understanding of its legal authority, Interior must move towards a future where public lands are protected for a variety of uses – not simply used as sacrifice zones for a polluting industry that is exacerbating our climate crisis.”

“This decision marks a step forward in ensuring our public lands are part of the climate solution, not the problem,” said Dan Ritzman, director of the Sierra Club’s Lands Water Wildlife Campaign. “At a time when we need to be rapidly transitioning away from dirty oil and gas to meet our climate commitments and avoid the worst of the climate crisis, the last thing we need is to sell off even more of our treasured public lands to the fossil fuel industry.”

“The court’s sensible decision is not only welcome, but necessary in the face of the climate crisis and ongoing environmental racism,” said Hallie Templeton, legal director at Friends of the Earth. “The administration’s hands were never tied, in part because bedrock environmental laws like the National Environmental Policy Act authorize the government to analyze and halt actions that pose serious harm, like more oil and gas development.”

“This is a sensible decision which allows the federal government to take the steps needed to tackle the climate crisis,” said Matt Kirby, senior energy director at the National Parks Conservation Association. “Climate change is an urgent threat to our planet and way of life and we need an administration able to take these bold steps in order to protect our national parks. We hope the administration will continue to strengthen its position and eventually end all new leasing on public lands.” 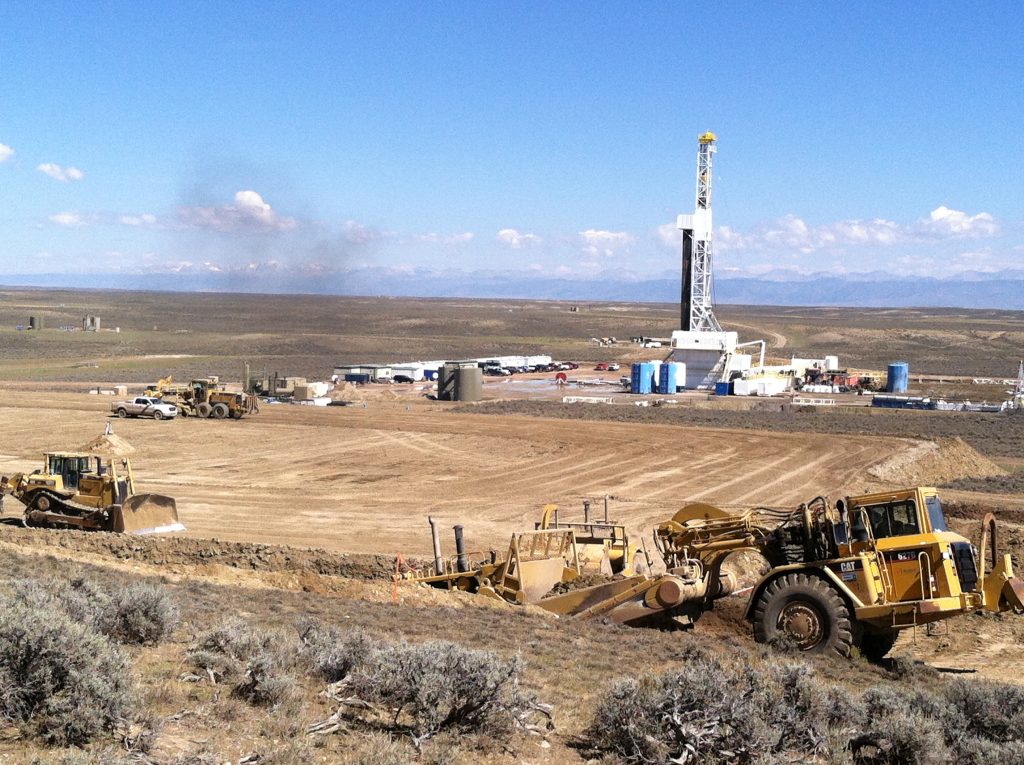 Fracking and associated development on public lands in Wyoming. Photo by WildEarth Guardians.