Coalition calls on Biden administration to Frack Off Chaco

October 1 was the deadline to send scoping comments on the proposed auction of over 740,000 acres of public and ancestral tribal lands across 10 states, including 5 parcels in southeastern New Mexico’s Permian Basin during the Bureau of Land Management’s February 2022 oil and gas lease sale. The comments represent years of public opposition to new and on-going fracking collected over three administrations, including the Biden administration.

President Biden campaigned on a promise to ban all new oil and gas leasing and drilling on public lands and issued a pause on new lease sales in January. On February 1, 2021,  Biden issued Executive Order 14008, establishing the climate crisis as a priority and directing a programmatic review of the federal oil and gas leasing program.

The federal fossil fuel leasing program has been rife with conflict, and Greater Chaco Coalition members have consistently protested in-person for quarterly oil and gas lease sales since 2016, despite auctions moving online in 2017.  Throughout the Obama, Trump, and Biden administrations, New Mexican frontline and Indigenous communities have been calling on leaders to finally address the legacy of resource colonization and energy sacrifice zones in the Greater Chaco Landscape and across New Mexico.

“With the agency moving forward to lease more lands for fracking, Biden is following in his predecessor’s footsteps, and once again, we are faced with more broken promises. The federal government continues to fail communities and sell-out our environment and air and water resources to the very industry responsible for climate change and its devastating impacts. For over a century, the federal government has quite literally treated New Mexico like a national energy sacrifice zone. As the second-largest oil-producing state in the country, our communities additionally suffer from the harms of oil and gas drilling and impacts of climate change. While oil and gas CEOs line their pockets with profits and tout its importance to our economy, it remains a burden to New Mexico’s land and people. Despite being the second top-producing state in the country, we are one of the poorest states in the nation, with the worst public education and the highest rates of child poverty and hunger.”

“Federal fossil fuel leasing on public lands and waters alone accounts for more than one-quarter of the United States’ climate change pollution,  causing climate chaos that impacts our air and water quality, our environment, our way of life, and public health. No more leases, not one more fracking pad. Our leaders must be prudent and commit to keeping fossil fuels in the ground.”

“The Permian Basin in southeastern New Mexico is the largest and cheapest oil field on the planet, and New Mexico is home to the nation’s largest methane hotspot due to oil and gas extraction. Frontline communities continue to experience dangerous levels of air quality, as regulators allow frackers to break the rules and sacrifice community health.  We must fundamentally reform the federal fossil fuel program and put communities, climate, and environmental justice first.”

“President Biden campaigned on a promise to ban new oil and gas drilling, but this massive lease sale is just more of the same – a continuation of Trump’s dangerous “energy dominance agenda” and more broken promises to act on climate. In his first six months in office, the Biden administration approved nearly 2,500 oil and gas permits to drill on public and ancestral tribal lands, outpacing the rate of approvals of the Trump Administration. Oil production is rising on federal lands in states like New Mexico, countering claims that President Biden is taking the climate crisis seriously.”

“The Department of the Interior has yet to complete its programmatic review of the federal oil and gas program, but has admitted the program is in need of fundamental reform to finally account for its cumulative  impact to the climate, lands, waters, and communities. By moving forward with this lease sale, the Biden administration is proving that it is no different from the Trump administration by continuing to prioritize the fossil fuel industry over climate and environmental justice.”

“NM oil and gas communities in the Permian and in the Greater Chaco region suffer from some of the highest rates of asthma and associated health impacts from oil and gas drilling. Allowing this lease sale will continue a legacy of resource colonization and energy sacrifice zones, harming marginalized and poor communities of color the most. Across the Greater Chaco Landscape, drilling disproportionately harms Indigenous communities that include impacts from increased truck traffic, road degradation, noise and light pollution, decreased air and water quality, the destruction of sacred sites, and other associated impacts.”

“Biden must uphold his promise to address the nearly 25% of U.S. emissions that come from the consumption of fossil fuels by ending new lease sales for public lands and waters. We cannot continue to sacrifice our public lands to the oil industry at the expense of the climate, local communities and future generations.” 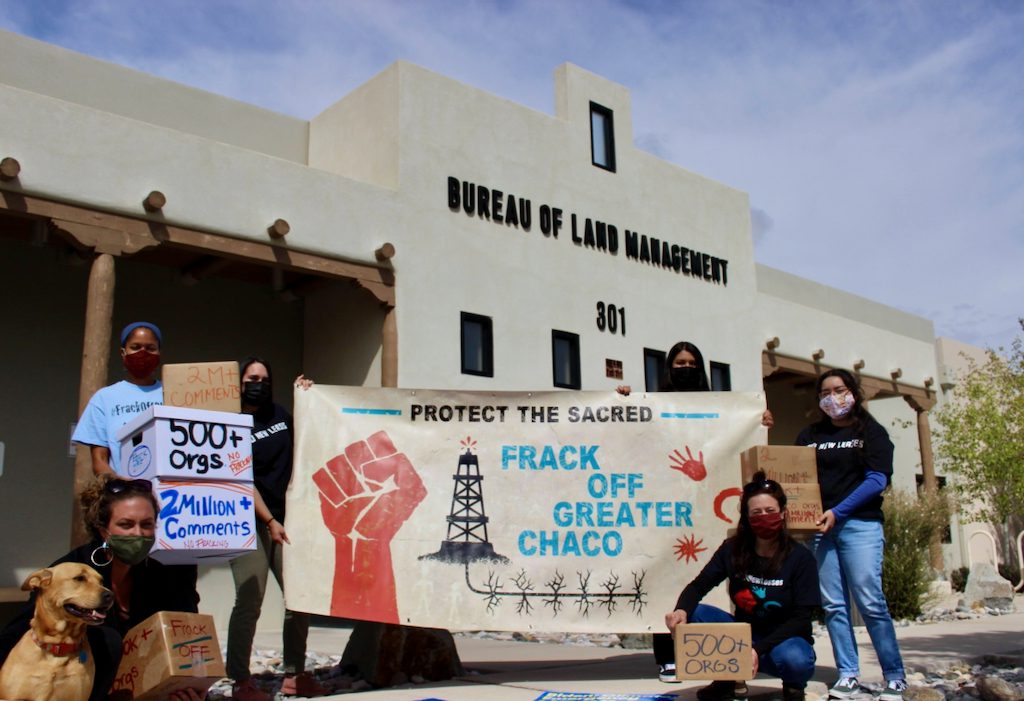