Wildlife   Bobcat, Coyote, Mexican gray wolf
#DefendCarnivores, #EndTheWarOnWildlife
ALBUQUERQUE—Drivers in Albuquerque and Las Cruces are confronting a brutal reality about wildlife management in New Mexico thanks to a series of billboards, bus shelter ads, and bus banners recently unveiled by WildEarth Guardians. The billboards feature a bobcat in a steel leg-hold trap with the message “Trapping is Torture: Protect Public Lands.” The billboards were deployed this month in an effort to mobilize popular support to support for a New Mexico legislative campaign to ban trapping on public lands. 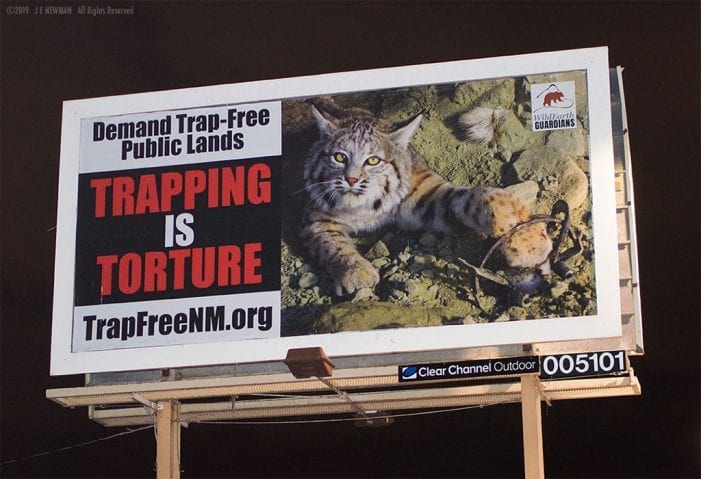 It’s a message New Mexico’s citizens badly need to hear. Thousands of wildlife are killed every year in the Land of Enchantment due to the dangers of recreational and commercial trapping. There has been a number of high-profile incidents of dogs being injured or killed recently.

“As a dog lover, I was horrified by the recent story of a beloved dog strangled to death by a trap right in front of her desperate owner,” said Representative Christine Chandler (D-Los Alamos). “I believe it is time to eliminate from public lands the indiscriminate and cruel devices on that can kill or severely injure pets and other collateral animals and encourage responsible and respectful hunting practices that do not cause such unnecessary suffering”

The billboard campaign coincides with the 2019 New Mexico legislative session, during which a bill will be brought forward to protect native wildlife and companion animals by banning recreational and commercial trapping on public lands. Representative Chandler is a co-sponsor of the legislation along with Representative Bobby Gonzales (D-Taos) and Representative Matthew McQueen (D-Galisteo).

“Many New Mexicans don’t know that brutal and often lethal traps litter the public lands where we all go to recreate and find solace,” said Christopher Smith, southern Rockies wildlife advocate for WildEarth Guardians. “If more people knew about this, I have no doubt that the practice would have been banished a decade ago.”

Trapping, which is legal on almost all public lands in New Mexico, inflicts tremendous torture on wildlife. Animals caught in traps face dehydration, starvation, predation, broken bones, dislocations, hypothermia, psychological trauma, bleeding out, and self-amputation. Traps are legally required to be checked every calendar day, but there are been many instances (some recent) of trapped animals languishing for days.

Pet dogs are frequently caught in traps and bring greater attention to this archaic practice. There have been several incidents involving companion animals so far during this trapping season, two of which were fatal. The toll of trapping on native wildlife is a story that is less frequently told. Every year, foxes, badgers, bobcats, coyotes, skunks, beavers, and ringtails are killed by trappers. Last year the death toll was just under 5200 animals, according to the New Mexico Department of Game and Fish. That number does not include non-target species, including two endangered Mexican gray wolves who died after trapping incidents.

Photographs of the billboards can be accessed here—please credit “J. E. Newman.”

Trapping on public lands is legal in New Mexico. No bag limits exist for furbearer species. The law does not require trap locations to be marked, signed, or for any warnings to be present. No gross receipts tax is levied on fur and pelts sold by trappers. No penalties exist for trappers who unintentionally trap non-target species including endangered species, protected species, domestic animals, pets, humans, or livestock. The new proposals leave all of these problems in place.

No database or official record is kept by any public entity and no requirement exists that trappers report when they have captured a dog in their traps. The pattern these incidents follow is usually similar; dogs screaming and frantically biting at the person desperately trying to rescue them. Veterinary and even human medical treatment along with associated expenses can result, as can long-lasting psychological trauma. Neither New Mexico Game and Fish nor trappers is liable for the damages that are caused by traps.

The true toll that trapping takes on native wildlife is difficult to know. Reporting requirements exist for some species, but not for often-trapped so-called “unprotected furbearers” like coyotes and skunks. The accuracy of reporting is unverifiable, and numbers do not adequately articulate the suffering and carnage that traps wreak on bobcats, foxes, critically imperiled Mexican gray wolves, coyotes, and other animals.

The almost singular excuse for the above-mentioned incidents is that trapping is necessary to control carnivore populations, but scientific studies do not support this assertion. In fact, scientific studies show that trapping and lethally removing carnivore species, like coyotes, often exacerbates conflicts such as those with livestock (see Using Coyotes to Protect Livestock. Wait. What?, Randy Comeleo, Oregon Small Farm News, Vol. XIII No. 2, p. 2, (Spring 2018)).

The existence of trapping by a minuscule subset of the population using New Mexico’s public lands is in direct conflict with one of the state’s most valuable economic strengths: outdoor recreation. Highlighted by the recent New Mexico Outdoor Economics Conference in Las Cruces, the outdoor recreation economy in New Mexico is a current and future boon—diversifying and stabilizing the state’s economy while creating 99,000 direct jobs in the process. Outdoor recreation includes hiking, camping, wildlife viewing, photography, hunting, horseback riding, angling, trail running, and bicycling. This economy is not bolstered by piles of dead animals discarded by public roadways or by the thousands of wild animals taken from New Mexico’s diverse public landscapes for personal profit.