“Investing in long-term water security for the state is a smart use of some of the non-recurring money from this year’s record budget surplus,” said Kristina Fisher, Associate Director of Think New Mexico. “Funding the Strategic Water Reserve today can save the state money in future years by preventing expensive litigation over our rivers.”

The Strategic Water Reserve was first proposed by Think New Mexico in 2003 as a water management tool to keep more water in New Mexico’s rivers and to serve as a buffer against both drought and conflict over Compact obligations. The Strategic Water Reserve consists of a pool of publicly held instream water rights, acquired by lease, purchase, and donation, to enhance flows in New Mexico’s rivers. Water held in the Strategic Water Reserve may be used to 1) assist the state in complying with interstate stream compacts and court decrees and 2) to benefit threatened or endangered species or to avoid the listing of additional species. Both of these purposes have the potential to prevent expensive litigation that can burden the state.

Since it was enacted in 2005, the Strategic Water Reserve has only received sporadic funding, and there are currently no ISC staff assigned specifically to Strategic Water Reserve planning and implementation. Despite an initial investment of $4.8 million, a total of $4 million appropriated to the Reserve was clawed back to meet other budget needs, forcing water managers to cut off negotiations to acquire water rights in critical stretches of the middle Rio Grande as well as elsewhere across the state. In order to operate effectively, the Strategic Water Reserve needs to have sufficient long-term funding to allow the Interstate Stream Commission to engage in negotiations to purchase water rights, a process that often takes many months or even years.

The need has never been so urgent. New Mexico has seen multiple years of extremely difficult water conditions, including the worst drought conditions in 1,200 years spanning the American West. These conditions, largely recognized as aridification or a more permanent drying, are straining the limits of interstate agreements to deliver water downstream in both the Rio Grande and the Colorado River. As New Mexico works to meet its compact obligations, the rivers themselves are equally stressed. The Rio Grande began to dry in the Albuquerque reach for the first time since the early 1980s last week, reflecting the dire water outlook on our state’s largest river.

In their letter, the groups explain that a lack of consistent multi-year funding and dedicated staff time has left the ISC unable to utilize the Strategic Water Reserve to its full potential. As river flows decline and litigation on the Rio Grande potentially nears settlement, the Reserve is one of several essential tools that are needed to meet the challenges of climate change impacts, growing demands, and overarching legal structures like the Rio Grande Compact. The groups, representing tens of thousands of supporters throughout the American West, make the case that these challenges threaten the water security for the state, the needs of native and imperiled species, and quality of life for all New Mexicans.

“The impacts of climate change are real and they are here,” said Tricia Snyder, Rio Grande Campaigner for WildEarth Guardians. “To ensure an equitable water future for New Mexico, which takes into account the needs of all water users, it is imperative that all the tools at our disposal are readily available.”

“The Strategic Water Reserve is an important tool for improving stream flows in New Mexico,” said Toner Mitchell, New Mexico Water and Habitat Director for Trout Unlimited. “For the persistence of wildlife and human values such as recreation and agriculture, it’s imperative that New Mexico funds a range of such tools to address declining surface flows from the valleys to the headwaters.”

“The Strategic Water Reserve has the potential to be of critical help in dry years to endangered species like the yellow-billed cuckoo and Southwestern willow flycatcher”, said Judy Calman, New Mexico Policy Director for Audubon Southwest. “Significantly funding this innovative tool would allow the state to leave more water in the rivers, ensuring some refuge from drought for these and other water-dependent birds in New Mexico.” 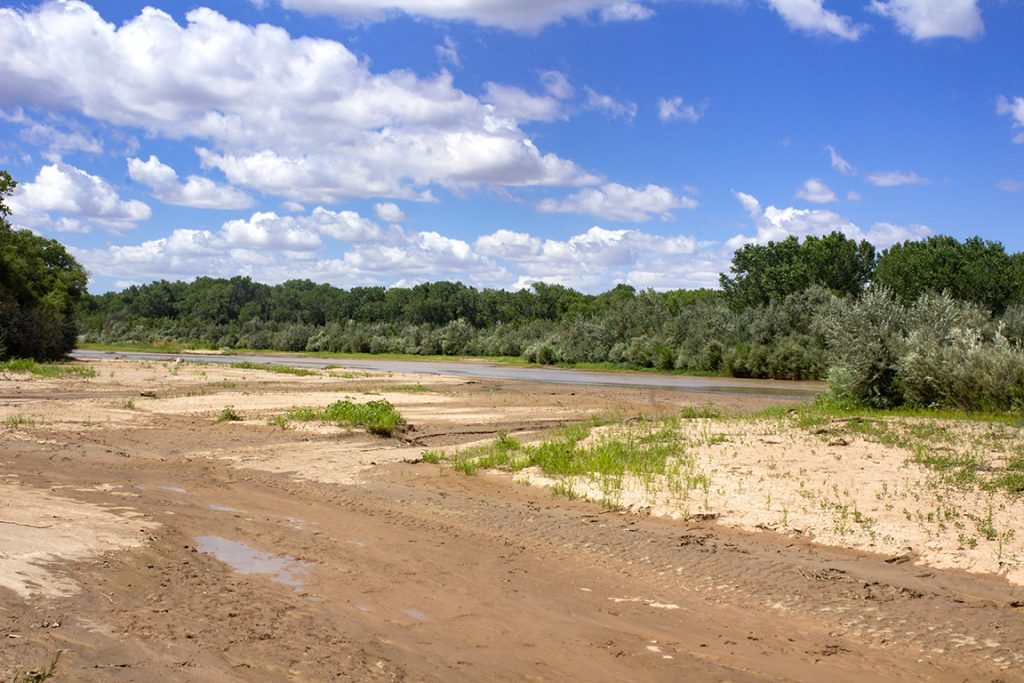 The Rio Grande has run dry in Albuquerque for the first time in 40 years. Photo by Javier Gallegos.