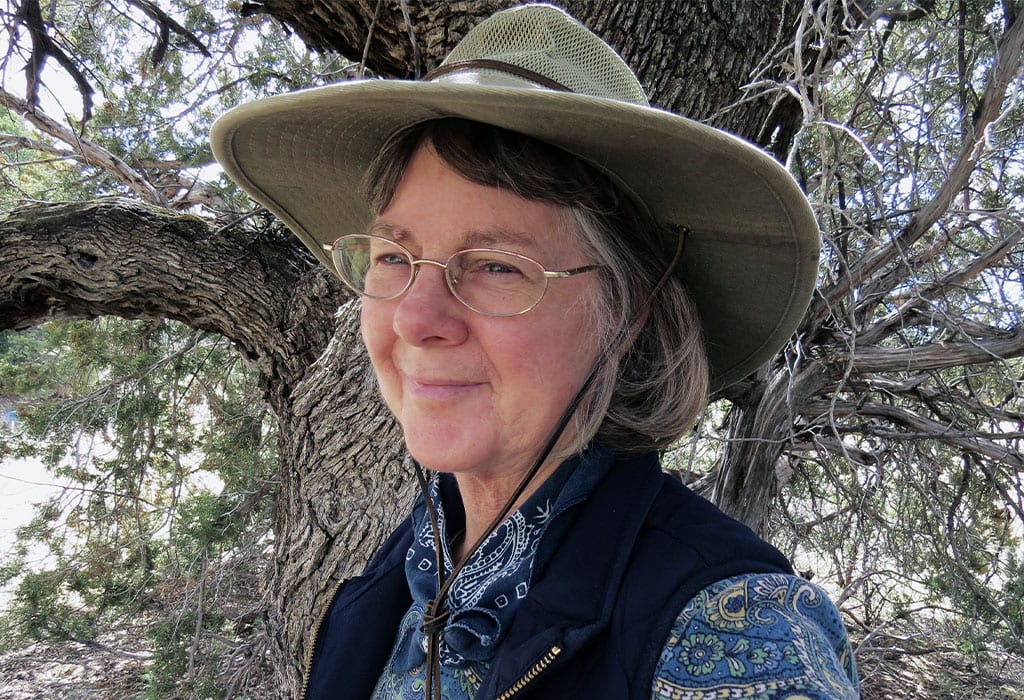 The first time Mary Katherine Ray encountered a leg-hold trap on one of her solo wilderness jaunts, she was lucky.

She was hiking with her two leashed dogs, hours from civilization, when they caught wind of the trap’s smelly bait and dragged her toward it. She unknowingly nudged the trap with her foot and it sprang shut, harmlessly.

Out of curiosity, she tried to pry it open and failed. Had the trap closed on one of her dogs, she realized, she would have been helpless to release him.

“It really shook me,” she said.

When Ray recounted this story to her friends, she realized with horror that she was not alone in her experience with traps. It registered that hers wasn’t a one-off situation— traps littered New Mexico’s public lands, and they posed a danger to any person or dog recreating there. Her crusade for wildlife was born.

Time for a Change

Ray and her husband built their dream home in rural Socorro County, N.M., nearly 30 years ago. The house’s location— “in the middle of nowhere but, to us, in the center of everything,” according to Ray—also places Ray in the center of an ongoing battle over New Mexico’s carnivores.

On the one side: trappers and the livestock industry, who for years have wielded their influence to maintain a stranglehold on the state’s exploitative carnivore policies. On the other: conservationists, wildlife enthusiasts, and numerous New Mexico residents who view trapping as archaic and cruel.

The battle came to a head during the recent 2019 New Mexico legislative session, which featured two prominent carnivore-related bills: HB 366 to end trapping on public lands and SB 76 to ban coyote killing contests.

As she followed the bills’ progress, Ray was appalled at the vitriolic discourse around coyotes, which are frequent victims of trapping in addition to targets of killing contests.

“The hatred that some people have towards this small native carnivore defies reason,” she said. “It makes me think the issue is about something bigger than coyotes. It’s about controlling nature. It’s about economic factors that you can’t control.”

As a former science teacher, she knows the ecology well: ecosystems need coyotes to keep rodent and rabbit populations in check. And as an observer of coyotes on her property, she knows their intelligence and beauty well, too. So the more she hears the invective against them, the more it’s clear to her that they’re not the monsters others make them out to be—and the more evident it is that New Mexico’s policies need to change.

“I knew right away what happened,” she said. “My dog leapt in the air. And the sound of it…it was unearthly.”

Her dog, Greta, escaped, but there was another casualty: Ray’s ability to enjoy the public lands near her home. She’s rarely returned since, and never during the trapping season.

“I feel like that place has been stolen from me,” she said. “I long for the day when that isn’t true anymore, when I can walk my dog not feeling that it’s a risk.”

It seems that day is drawing closer—thanks, in no small part, to advocacy by Ray and a tight community of New Mexico environmental organizations, including WildEarth Guardians.

When the New Mexico legislature was debating HB 366, Ray woke up at the crack of dawn and drove four hours in the dark to testify on the bill’s behalf. Before it died on the House floor, HB 366 made it through two committees—an unprecedented feat in a state inhospitable to wildlife legislation.

Ray and her colleagues also began recruiting carnivore defenders across the state to attend protest rallies and write emails to end coyote killing contests. After years and a massive group effort, in April New Mexico’s governor signed SB 76, which does just that. Coyote killing contests are now unlawful in the Land of Enchantment.

While wildlife cruelty won’t vanish from New Mexico overnight, SB 76’s success is, “I hope, a bellwether of how the times are starting to change,” Ray said. “There’s that adage: endless pressure, endlessly applied. That’s what it takes.”