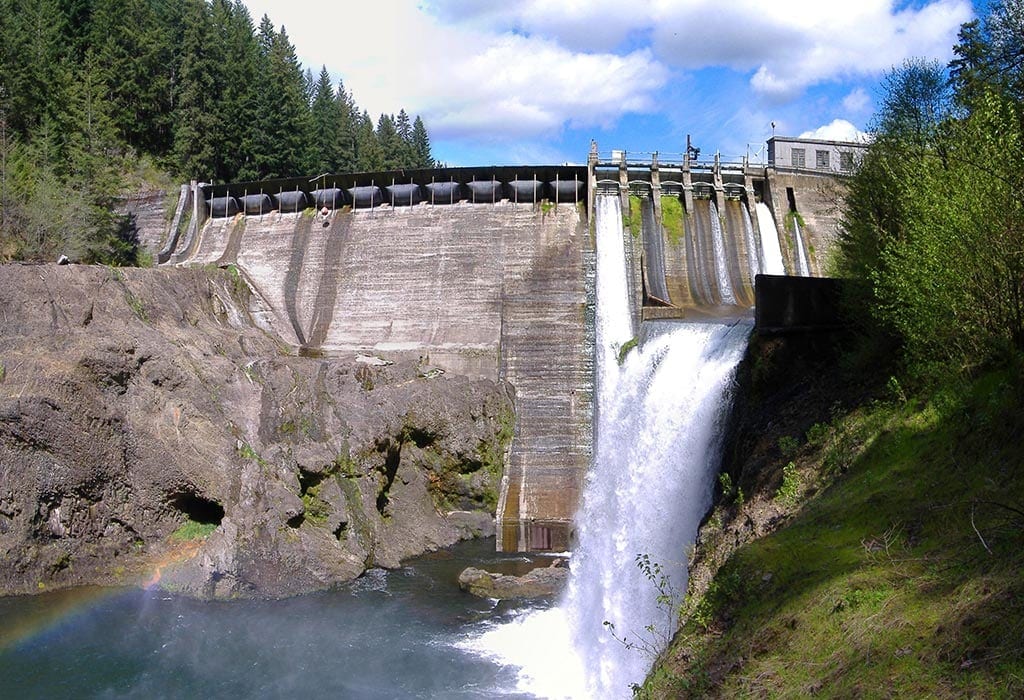 Dammed if you don’t

As you venture westward on my property, nature begins to reclaim the landscape. A well-manicured driveway metamorphoses into feral meadows studded with invasive blackberry bushes and decomposing wooden fence posts left over from a long-ago organic garden. In a fallow field, pine shrubs hunch forward against the winter wind and a red-breasted sapsucker drums on a dying tree. Beyond, the forest begins; light dims and strange mushrooms emerge from the damp soil. Make your way over and around muddy pools of water, rotting plants, and rusted-out farm machinery until the trees thin and the ground drops precipitously into a canyon. Stand on your tiptoes and perhaps you can see it, a thin coil of whitewater wrapping itself around the rocks below: the White Salmon River.

There used to be a man-made reservoir here created by the erstwhile Condit dam. Though it’s been six years since that reservoir was drained, on some maps you can still see the ghostly outline of 11,000-foot-long “Northwestern Lake”. The land that formed the lake bottom is a park now, surrounded by vacation cabins with docks extending to nowhere. And the dam, a 125-foot-high concrete behemoth, exists only in memory.

Construction of the Condit dam began in 1912, two years after my house was built on the hills overlooking the White Salmon. It would supply power to the Crown Willamette Paper Company in nearby Camas, Washington; in those years, the lumber industry was the state’s largest employer. Black and white photographs depict the structure rising from the riverbed, a lattice of wooden support beams jutting from the concrete.

While the dam originally included fish ladders to aid spawning fish like Chinook salmon and steelhead, floods destroyed the ladders not long after the dam’s completion. Thirty-three miles of spawning grounds were rendered inaccessible and natural fish migration in the river ended.

Nearly a century passed. Electric company PacifiCorp acquired the dam and, in the 1990s, attempted to get it relicensed—something hydropower producers must do periodically. This time, however, the Federal Energy Regulatory Commission (the regulatory agency responsible for licensing hydroelectric dams) demanded PacifiCorp install a system that would allow fish to pass around the dam. PacifiCorp deemed the improvements too expensive and opted to remove the dam instead.

After more than a decade of legal wrangling, engineers blew a hole in the dam on October 26, 2011. At the time, it was the largest dam in the United States to have been removed, though other dams in Washington have surpassed that record in recent years. Spectators looked on via live-stream as a torrent of sediment-laden water rocketed downriver. Expected to drain over the course of six hours, Northwestern Lake instead drained in two; watching the video of the explosion, you can almost hear the river sigh with relief as it finally flows free.

Condit’s demolition was a watershed moment (har har) for restoring rivers to their natural state. Its importance was evident even in the responses I received to my offhanded comments about living near the former dam site. People told me where they were the moment Condit blew up. We humans are good at remembering the end of an era.

Salmon, steelhead, and even Pacific lamprey are returning to the area once unreachable behind a wall of concrete. Kayakers and rafting companies have a new section of river to explore. And whenever I’m in need of inspiration, I can make my way down to the canyon overlooking the White Salmon and consider the history that happened, quite literally, in my own backyard.