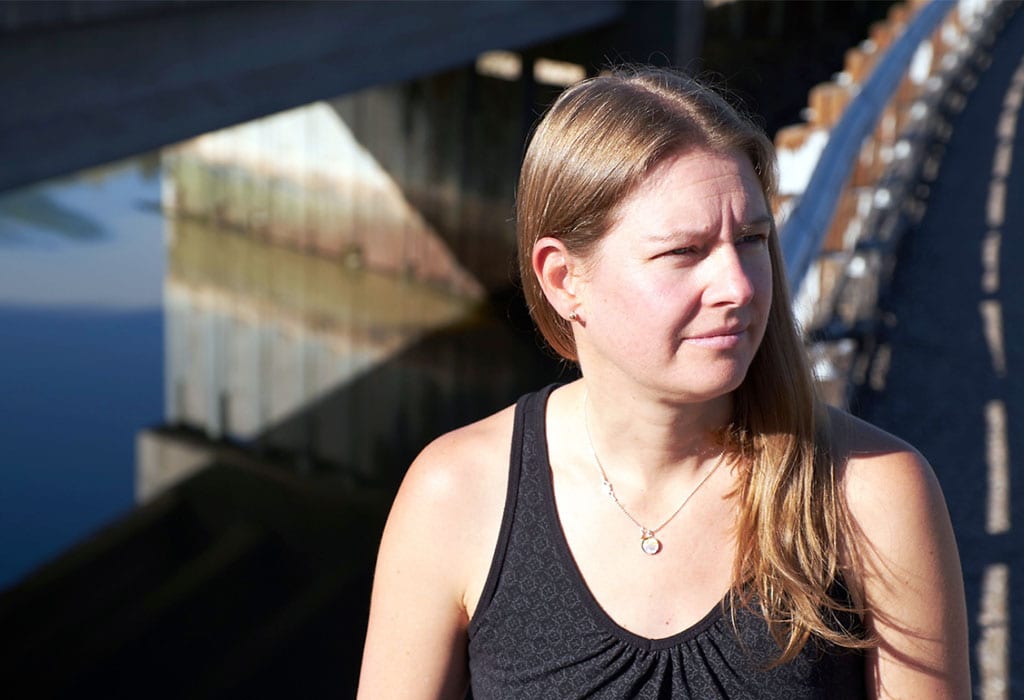 A voice for the river

Jen Pelz has always found herself in rivers. As a child she’d lie belly-down on a rickety bridge spanning the Conejos, a tributary of the Rio Grande, stick her head over the edge of the planks, and listen to the water roar. A water lawyer, self-described introvert, mother of two young daughters, and director of WildEarth Guardians’ Rivers program, she’s still there on the edge fighting to return life to the Rio Grande.

Working as a water lawyer at a private firm in Denver, she learned the ins and outs of the complex system of water law in the American West and carved out space in a field dominated by men. Gradually, though, she realized the work was crushing her soul. She parsed out water at others’ behest and crossed her fingers that it wasn’t affecting the river too badly, yet knew all the while that it was.

After the birth of her first daughter, she left the firm to find a new path forward. Suddenly she had an abundance of unstructured time to reconnect with her inner wild. Visiting the Conejos again—this time with her tiny girls—she realized the river might not be around by the time they grew up. So when she was offered a job with WildEarth Guardians, charged with protecting and restoring flows to the Rio Grande, she knew she’d found her calling.

As callings go, Rio Grande protector is a formidable one. Though the Rio Grande is famed in legends (and movies) of the West, people don’t really know it well. Parts of the Rio are so forgotten that forgetting has become part of the name—like the “Forgotten Reach” in Texas, where once a river flowed but now there’s no water and no people. But you could easily apply “forgotten” to most of the 1,900-mile-long river, which has been dammed, dredged, diverted, drained, and dried, so manipulated by human hands that the powerful force it once was has been lost to living memory.

Everyone thirsts for a drop of the Rio. In an arid landscape, its water is currency. Farmers want its water for irrigating their crops. Ranchers want it for their livestock. Cities want it for their residents. But despite the building of dams and reservoirs and canals for diverting its flows, there isn’t enough of it to go around. There never has been.

Laws regulating how much water should be bestowed to the states and countries the river flows through are archaic, complex, near-impossible to change, and comprehensible only to those with years of experience and particular scientific or legal expertise. So people keep asking for more water and water managers pray for rain.

During the rainy years, people can take water from the Rio and fool themselves into believing it’s sustainable. During the dry years, the river doesn’t even meet the sea; people take all of its water before it can.

In her efforts to shift the status quo on the Rio Grande, Pelz faces some formidable foes, including the self-described “Water Buffaloes”—older, predominantly white, and male water lawyers or engineers who have been moving water from one part of the Rio Grande to another for decades, and who don’t take kindly to having a woman in their midst—particularly one who believes rivers have an inherent right to their own water.

“You’re either in the club or you’re not,” Pelz says of the Buffaloes. “I don’t want any part of their club. I’m tired of being treated like a silly little girl who doesn’t know what she’s doing. I’ve actually practiced for a while and paid my dues. Either they can’t imagine I can actually win or fear that I actually can.”

And win she has. Bit by bit, Pelz is building a revolution.

There was the phone call she received from a fifth-generation farmer in the San Luis Valley of Colorado—one of the state’s poorest rural areas and heavily dependent on agriculture—who offered to forgo using the water he owns because that would help keep the Rio healthy and alive. There was the time she showed up to a meeting of the Rio Grande Compact Commission, gave an impassioned speech about endangered species issues on the river before a hostile audience, and had that hostile audience commend (and even agree with) her words. There are many stories like these.

Instead of an exclusive, white male culture built on legal acumen, Pelz envisions a Rio Grande Basin of community and connection, a basin where people consider those in surrounding states to be neighbors, not nemeses.

She wants a basin-wide community where we have a moral obligation to take care of our mother river because if we sustain it, it will sustain us.

Pelz’s daughters call the Rio Grande “mommy’s river.” They feature prominently in her photographs as they crouch on the Rio’s banks, wade in its currents, perch atop rafts. They hold her accountable.

“I want to be an example for my girls and teach them that you don’t just have to fill a certain role,” she says. “I can be a good mother and advocate for something that I believe in. I hope to build a foundation that supports their success and different path forward for our natural world.”

Pelz strives for stories that fulfill the “brave” category—which, when you think about it, is an apt description of her work as a whole.

And so, courageously, Pelz and WildEarth Guardians stand up for the Rio Grande, fighting for its long-overlooked and long-overdue right to its own water.

Cascade of water begins for Chinook salmon and winter steelhead

New Mexico’s rivers and streams are too valuable to lose