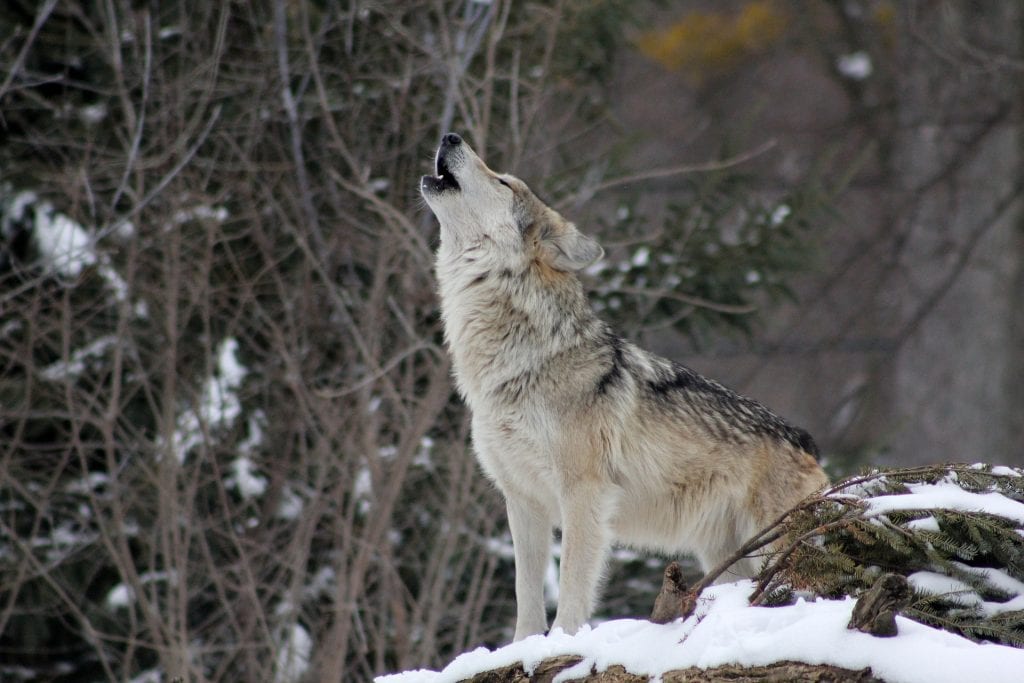 Why We Howl: Seeking the Wolf Inside

The stakes have become too high to continue reifying rugged individualism and unfettered growth. We howl now for change, deep tectonic change, for humans, for wolves, for the planet.

I recently finally began listening to the audiobook of Cormack McCarthy’s The Crossing after incessant urging by my partner, Mark. I had demonstrated some initial resistance, knowing McCarthy’s reputation for grim violence and stark depictions of the depravity of man. But I decided his imagined, if meticulously researched, historical world couldn’t be much more grisly than the current real one we find ourselves in. So I listen.

I bring all of this up to open today’s blog post because the first few hours of The Crossing revolve around a wolf, a pregnant she-wolf to be precise, making her way through the wild country of southwestern New Mexico and southeastern Arizona (the exact location of our Greater Gila campaign!). And she’s being pursued. A young rancher’s son is setting traps for our wolf, as she is the cause of numerous livestock depredations. At last listen, she’d finally been caught, forefoot gruesomely snared in steel jaws, after weeks of out-smarting the trappers. She’s been hog-tied and dragged behind a horse. And I’m not feeling like it’s cause for celebration, in fact quite the opposite. And I think McCarthy’s eerie foreshadowing of her capture is intentionally preparing me to interrogate the metaphor of the wolf, and what she might represent in the American imagination.

There’s no denying that McCarthy is something of a literary genius, his cult following can attest to that, but what most impressed me about the listen so far is his depiction of the wolf. There are whole paragraphs dedicated to her description. And while there is no trace of anthropomorphizing, he manages to render a picture of her so vivid, so alive and beautifully wild, that she becomes perhaps the most compelling character in the story so far. Her experience becomes a deeply felt experience for the reader. To bring such life to a fictional non-human literary presence requires more than just a way with words. I can only conclude that McCarthy must have come to know the wolf in an extraordinary way, in a way, perhaps, we can all come to know the wolf one day.

As an added bonus to my wolf wonderings, it’s Wolf Week here at Guardians (check out our webpage on Wolf Protection and Recovery and our Mexican Wolf Recovery toolkit)! So we, as an organization, have also been thinking about wolves (really since our inception, over 30 years ago), and I have been reading other thoughtful voices who have been thinking about wolves. Because beyond their recently recognized status as charismatic megafauna, the wolf plays into some of my previous weekly themes, namely national mythologies, and ideas about One Health, in addition to the new nation-wide ritual of howling for healthcare workers that takes place every evening.

Let’s start with the wolf as a player in our national mythology. The enlightening dissertation paper by Gavin Van Horn titled Howling About the Land: Religion, Social Space, and Wolf Reintroduction in the Southwestern United States discusses the various relationships humans have with wolves, both in contemporary and historical contexts. Van Horn attributes the near eradication of wolves in the U.S. in the mid-20th century to the fervent disdain that came ashore with early European colonists, who, as keepers of domesticated animals, saw any and all wolves as vicious, calf-eating monsters. This reputation persisted, and was even elevated with the rise of the venerated cowboy, and the thrill of his brave quest to tame the wild frontier and all the savageness (wolves) that came with it. What I find most worthy of further rumination is the way the wolf violates two American ideals. First, the wolf has no notion of private versus public property, and, as a species with an inherent need to roam great distances, is therefore a common and unwelcome trespasser. Second, the wolf embodies a certain archetype of freedom and wildness, the former which we envy and the latter which we fear. The wolf exists in a state of original liberty and, as Van Horn so aptly observes, their howls become “a reminder of what humans have yet to subdue.”

In another scholarly paper by Martin A. Nie from the University of Minnesota titled The Sociopolitical Dimensions of Wolf Management and Restoration in the United States, wolf reintroduction becomes a lens with which to view shifting attitudes in American social and political spaces through time. I love this idea because it mandates a recognition of the ways we etch our human agendas, both implicit and explicit, onto the landscape and all the other selves that reside there within. As Van Horn suggests, for so long our obsession with that which is “civilized” (i.e. urban sprawls, agricultural fields, domesticated animals) has justified a scorched earth policy to eradicate that which is “wild” (i.e. uninhabited landscapes, unfamiliar cultures, non-domesticated animals), all in service of some constructed notion of progress.

But how does this tie in to our current moment of pandemic and social upheaval, you may ask? From the perspective of One Health, the wolf is a critical keystone species, one that when taken out of an ecosystem can cause a cascading extinction effect. We saw this with the Yellowstone reintroduction of wolves, as there was an astonishing recovery of habitat and a reestablishing of ecological balance. If we accept as true the concept that our health is inherently tied to the health of our community, our environment, and the planet, then we insist upon a coexistence model in which we share space and resources with other species who serve important ecosystem functions in maintaining that holistic health and wellness.

Furthermore, as Nie posits, when we come to recognize our treatment of wolves, through individual actions, management practices, or restoration efforts, as an expression of our own fears and insecurities, and our own confusion from the slow dissolution of an unproductive national mythology, perhaps we can manage those emotions with more grace and self-awareness. Perhaps we can lean into the challenge of inspecting our own imperfections, our misguided ideologies that lead to skewed perceptions of what counts as valuable. Perhaps we can tenderize our own human-ness, gather the truth of our own vulnerability and co-dependence on that which we may not know nor understand, and step towards a new and brave way of being a human in the world, a human in the world with wolves and bears and other humans, and be grateful to be small and soft and in our own way unsubdued. We howl now because we are afraid, not just of the Coronavirus, but of our own separation, our own loneliness. The stakes have become too high to continue reifying rugged individualism and unfettered growth. We howl now for change, deep tectonic change, for humans, for wolves, for the planet.