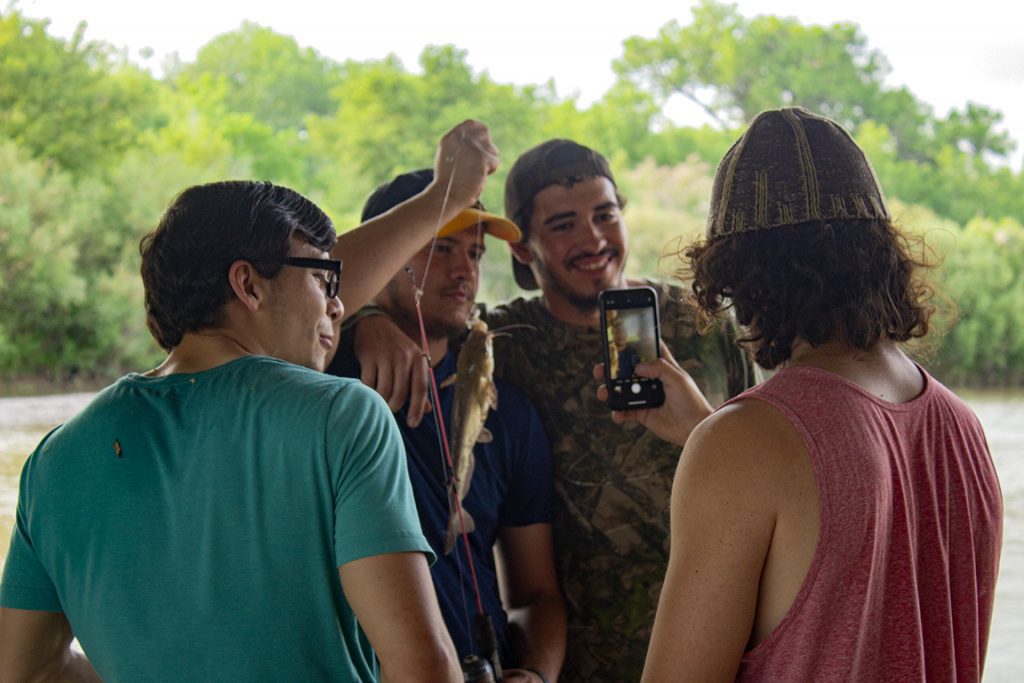 Over the course of the summer, I have been taking pictures of the central Rio Grande to document its flow over time and how people connect with it.

In the heat of the summer, residents of the Rio Grande flock to its shores as the river flow brings life to its communities. The time spent with the river has been diminishing decade after decade as these communities have grown accustomed to the Rio being dry significantly longer than it’s not. But when there is water in the river, people waste no time to meet and bond along its banks.

Over the course of the summer, I have been taking pictures of the central Rio Grande to document its flow over time and how people connect with it. Having grown up on the eastside of El Paso, Texas, I was unfamiliar with how much the river means to some people. Our community has grown disconnected from it because of the border wall and other water policy decisions, but while on assignment, I quickly learned the significance it still has to its many communities.

During my first visit to central New Mexico, I stopped by Riverside Park in Los Lunas. After a brief trail walk that was made unforgettable by the raining cotton that danced to the ground after falling from the cottonwoods native to the area, I made it to the river. It flowed under a bridge supported by graffitied pillars. 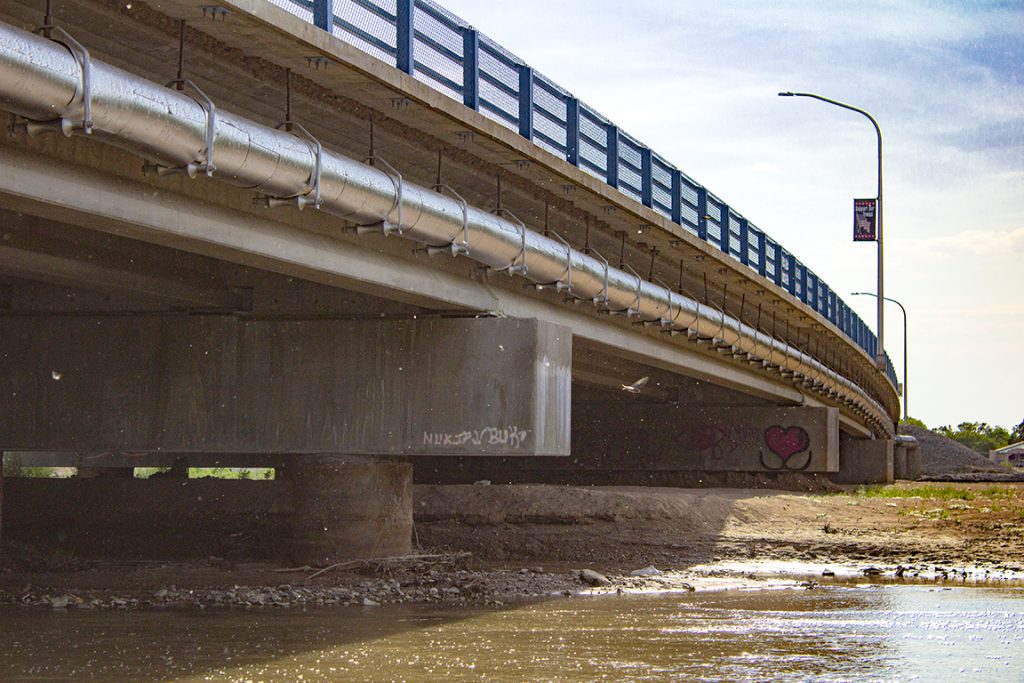 I was immediately greeted by a trio of teens swimming in the river. The sound of rap music blasting from their portable speaker didn’t feel out of place as the sound of cars driving above interrupted any sense of ambient natural sound.

Only a minute of picture-taking passed before one of them shouted at me asking what I was doing. I explained that my assignment was to take pictures of the river. They all swam closer to me on the bank as they became engaged in telling me everything they knew about it: the flow was currently about as high as it gets; Tome Hill has a great view of the river; the water is nearly all gone by fall.

One of the high schoolers jumps through tube floats into the river. Photo by Javier Gallegos.

Their hospitality and eagerness to talk about the river surprised me, but it would become a common experience throughout my assignment.

Shortly after I parted ways, a separate group of five friends in their early twenties arrived. Like the three high schoolers I had spoken to prior, they were intrigued by my camera and asked what I was doing here. They thought my assignment was pretty cool. The small talk they made with me eased my mind and let me relax when I asked if I could take their picture. They casually obliged.

I spent the next two hours with them by the river.

They came prepared with cans of Coke, water, fishing rods, bait, and hip-hop instrumentals. The first bits of conversation I caught revolved around the events of a party the previous weekend where clumsy attempts of love were made.

As stories played out and conversation wound down, a freestyle randomly began to my delight. One of the boys started rapping; another took out his phone and started playing a beat; the next jumped in with his own rhymes to turn the freestyle into a cypher. They rapped fluently about cars, money, and each other.

Fishing was the next thing to do. They had two rods and a can of worms between them. Their street clothes and light gear told me they’re hobbyists who perhaps only fish because it’s easy to do with the river full. Two fish were caught while I was there. Both were released after a quick picture.

Andress, Greg, Carlos, and Jules (left to right) pose with a catfish briefly before releasing it back into the water. Photo by Javier Gallegos.

An hour or so after the group arrived, an old, bearded, shirtless man rode his bike down to meet us by the river. The group cheerfully greeted him as if he too was a part of their graduating class. He offered them all beers, and they gladly accepted. It was a wholesome relationship the old man had with the group – an unlikely one that was made possible by their mutual hanging out by the river. Together, they talked, fished, and drank.

The old man told me his name was River Rat. He wore a bright bandana and knew of the best deals at the beer depots around the area. He spent much of his time by the river and its banks, so much so that he named himself after it. 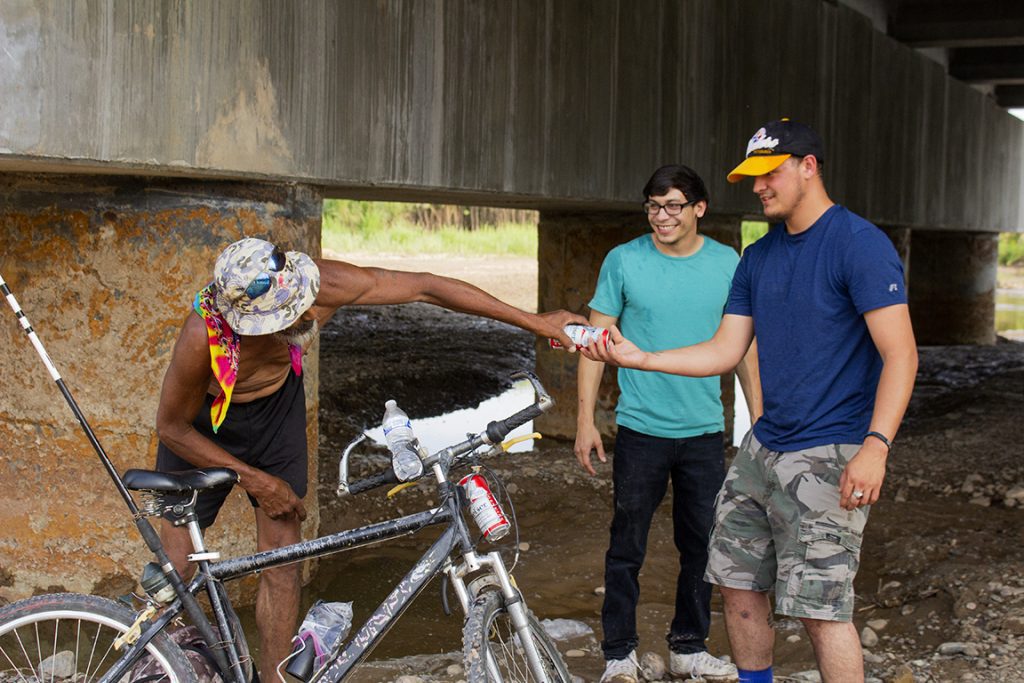 I left right before sunset as I had to check into my room before nightfall. Had I not been forced to leave, I would have stayed hours longer with the people that welcomed me to their spot along the river. Three of them left at the same time I did to go get dinner for the other three that stayed fishing. Everything they needed, they brought with them back to the river.

All this happened within just a few hours of being at a normal park along the Rio Grande. People all along the river connect with it every chance they get. As the fight for the river and natural preservation continues, its moments like these and the bonds that they create that remind us why the river matters. 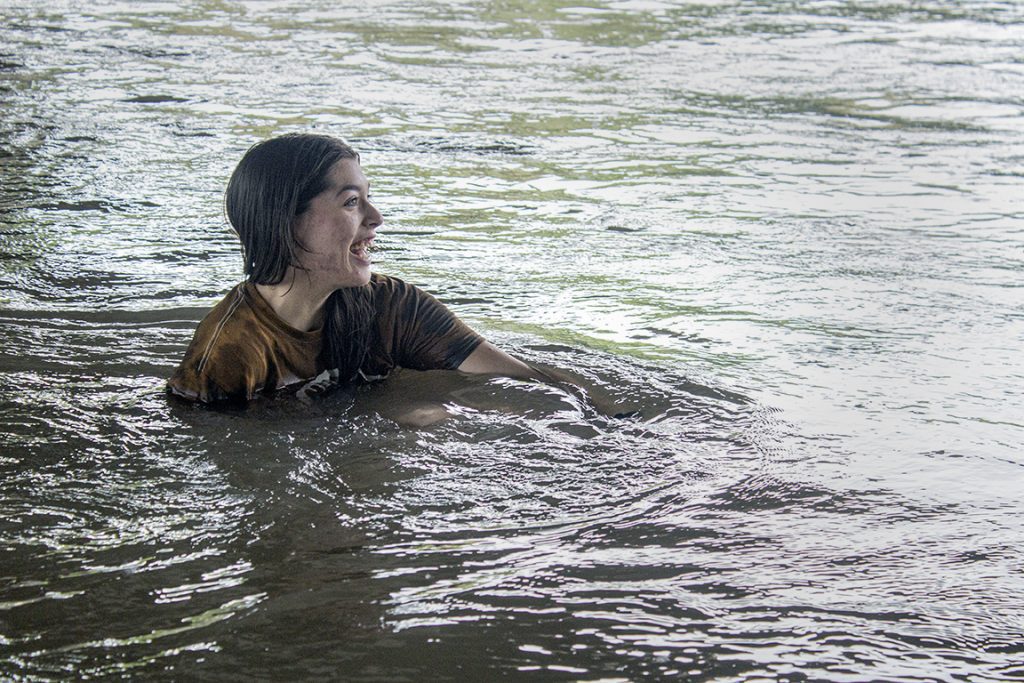 Francis sitting down in the river. Photo by Javier Gallegos.