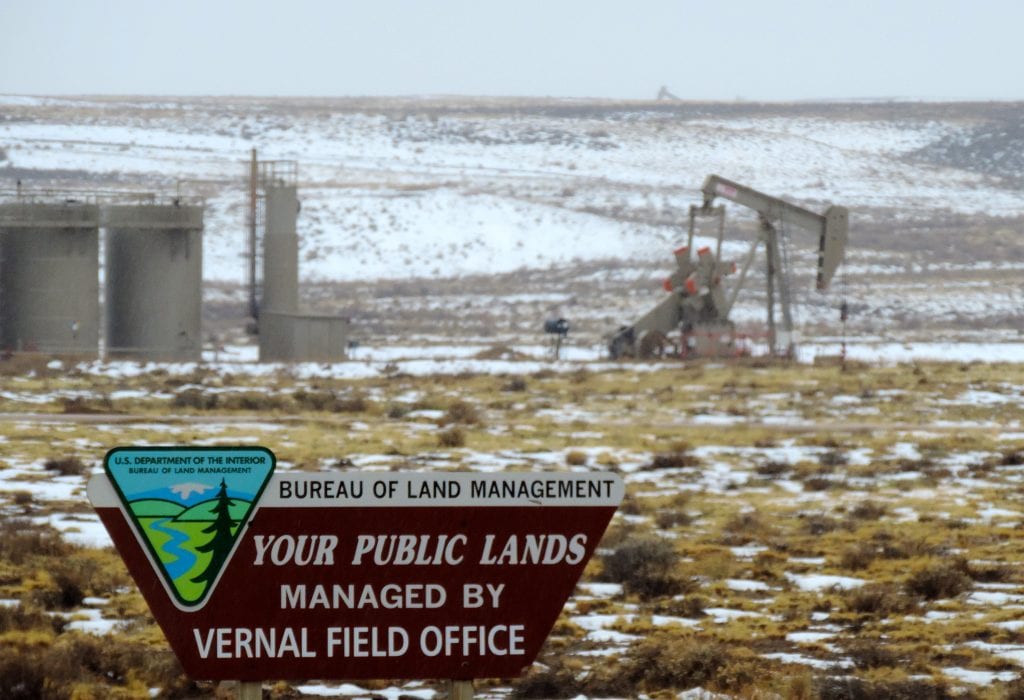 Pushing Back to Keep our Lands From the Fracking Auction Block

We Need Resistance to Climate Denial! Millions of Acres at Stake 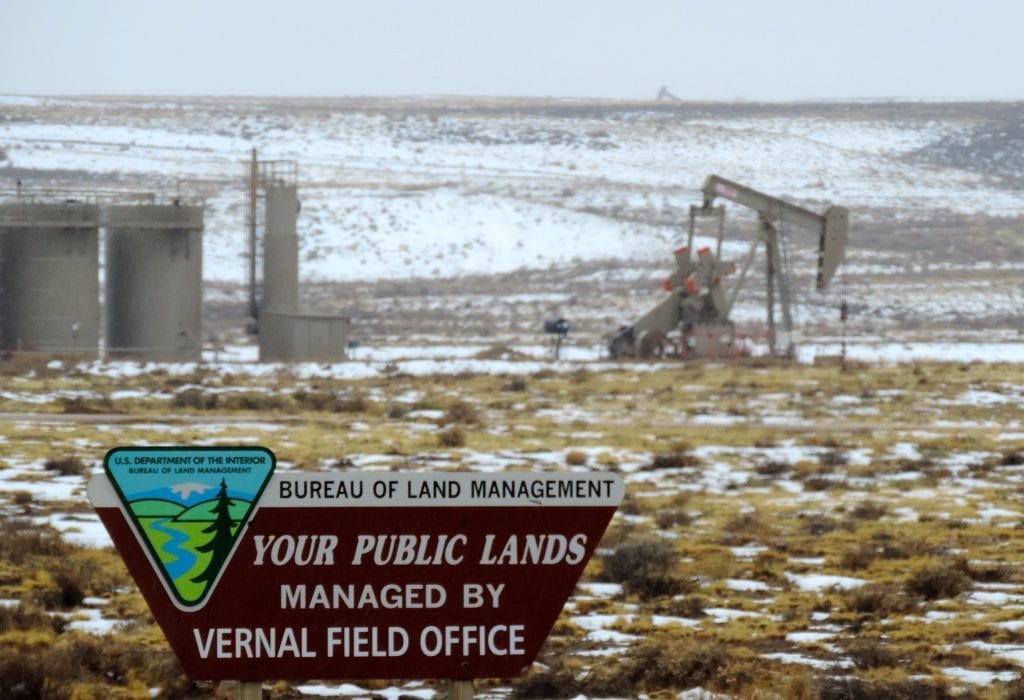 The Trump Administration is giving us the gift of fossil fuel destruction this holiday season, corruptly scheming with oil and gas companies to liquidate our western public lands for fracking.

In 2018, the U.S. Department of the Interior’s Bureau of Land Management put nearly 4 million acres of our public lands on the auction block, selling off vast swaths of the American West to the oil and gas industry.

Now, headed into 2019, it appears the Administration is gunning to put even more of our lands in the hands of BP, Exxon, and other notorious corporations. The consequences stand to be a disaster for our climate.

Just this past week, the Bureau of Land Management posted notice of plans to auction 768,942 acres of public lands in Wyoming this February. Most at risk is the Red Desert region of southwestern Wyoming, which contains the highest concentration of potential high desert wilderness in the western U.S.

However, across the American West, our treasured public lands are at risk. In Colorado, Montana, Nevada, New Mexico, Utah, and Wyoming, our lands are recklessly being sold off.

See for yourself, check out the interactive map below showing the lands (in red) the Trump Administration plans to auction away for fracking so far in 2019.

All told, the Bureau of Land Management has announced plans to sell more than 2.1 million acres in February and March of 2019. These include lands in the Greater Chaco region of northwest New Mexico, in and near state parks, next to wildlife refuges and National Forests, and in other sensitive landscapes.

In Nevada, the Bureau of Land Management is proposing to sell nearly 1 million acres of public lands, even though the oil and gas industry has no real interest in buying any lands for fracking in the state.

Here’s a rundown of the total acreage of public lands, by state, that the Trump Administration wants to sell for fracking in the American West so far in 2019. 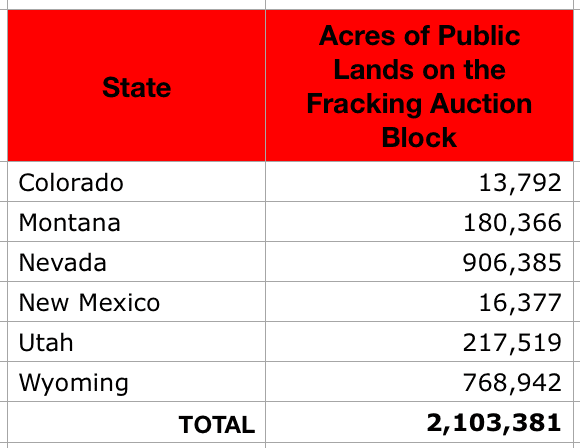 These sales to the oil and gas industry come even as the Trump Administration itself has sounded the alarms over the climate impacts of more fossil fuel production and consumption, and even as the Administration’s own scientists have confirmed that oil and gas produced from federally managed public lands are a huge source of climate pollution

In fact, according to a late November report from the U.S. Geological Survey, climate pollution from public lands oil and gas production (including offshore and onshore production) amounts to more than 491 million metric tons of carbon.

That amounts to nearly 10% of all U.S. greenhouse gas emissions.

The Geological Survey’s report also sheds light on the carbon pollution that stands to be unleashed as a result of selling more of our public lands for fracking.

So in total, 17,774,459 acres of onshore and offshore public lands were producing oil and gas in 2014, releasing a total of 491 million metric tons of carbon.

That means that for every acre of public lands leased for oil and gas development, whether onshore or offshore, an average of 27.63 metric tons of carbon is unleashed.

Which means that the Bureau of Land Management’s latest plans to auction 2.1 million acres of public lands for fracking in the American West stands to unleash more than 58 million metric tons of carbon pollution annually.

Based on the U.S. Environmental Protection Agency’s greenhouse gas equivalency calculator, this would be the equivalent of approving 15 coal-fired power plants.

If the Trump Administration was approving 15 coal-fired power plants, there would be widespread outrage. There’s no reason there shouldn’t be the same amount of outrage over selling our pubic lands for fracking.

The sad reality is, while Trump’s push to open up public lands for fracking is a known concern, the true climate consequences are overlooked.

Even the New York Times, which has invested heavily in reporting on the Administration’s sale of public lands for fracking, has focused on the issue of speculation, not on climate.

That’s not to say there aren’t other values at stake, including clean air and water, and more. We’ve forthrightly acknowledged that. But as the American West goes so does our climate. 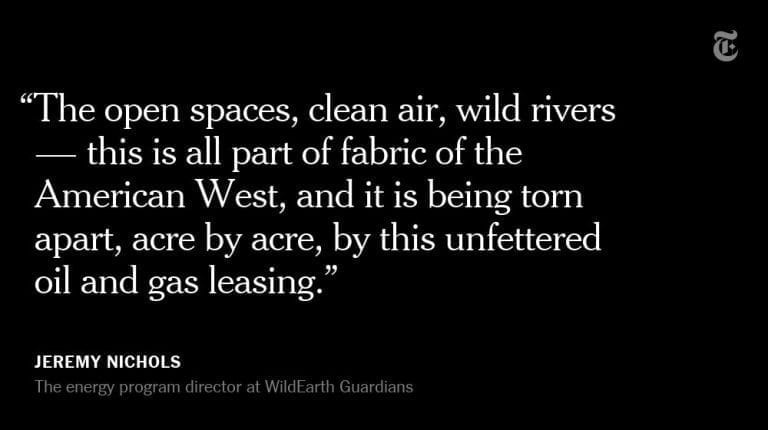 That’s why WildEarth Guardians is pushing harder than ever to ensure climate is a central issue as the Trump Administration sells off public lands for fracking.

Already, we have litigation challenging the failure of the Bureau of Land Management to account for the climate impacts of selling public lands for fracking in the western U.S. In 2019, we expect to step it up further.

Selling our public lands for fracking threatens everything that makes the American West special, as well as fuel climate destruction. We can’t stand by and do nothing.

We expect to ramp up our climate advocacy in 2019 and do everything possible to prevent new sales of our public lands to the oil and gas industry.

Given our climate crisis, the last thing we should ever allow is fracking on our public lands.