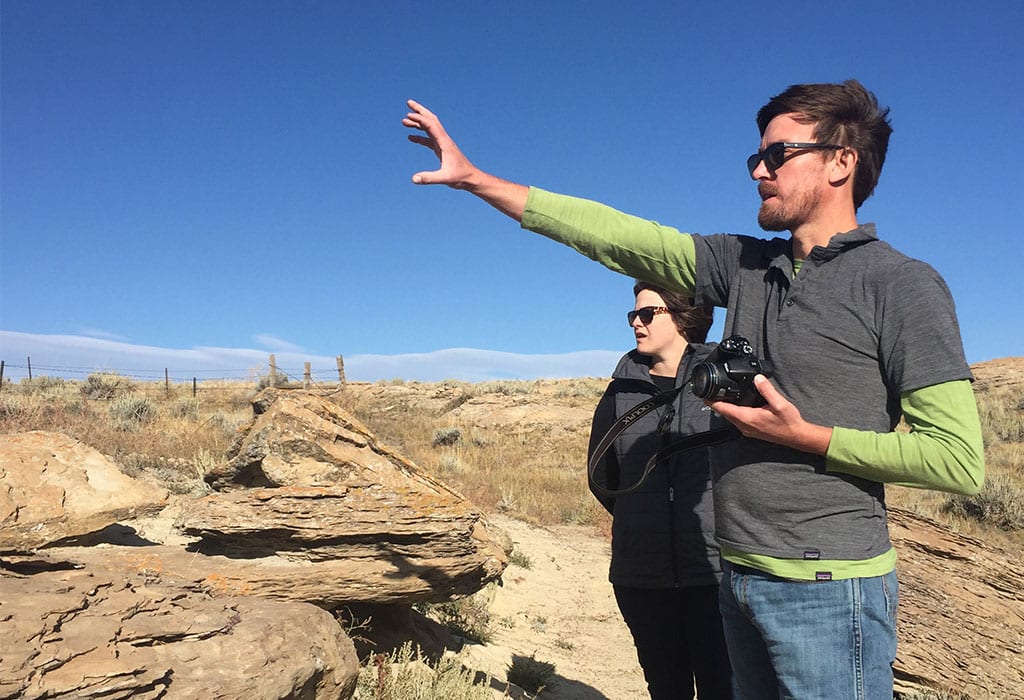 For the next step toward energy freedom, Climate and Energy Program Director Jeremy Nichols looks to grassroots advocacy

Nichols was studying geology at the University of Wyoming. The subject was, and still is, bankrolled by oil and gas corporations (“the geology building was ‘The ConocoPhillips Geology Building,” scoffs Nichols), yet he still did a double-take when professors started urging students to interview with Exxon.

“Seriously? Exxon?” Nichols recalls thinking. “It fired me up. We know we have a climate crisis here, we know it’s caused by greenhouse gas emissions, yet our society condones more oil and gas drilling and fracking and coal mining. I realized we have no hope if we can’t confront the power of the fossil fuel industry.”

So he took matters into his own hands, plastering the halls of the geology building with posters condemning Exxon for the Exxon-Valdez oil spill and other environmental disasters.

“I don’t know how many minds I actually changed, but it was a statement that needed to be made,” Nichols said.

He hasn’t stopped speaking out against the fossil fuel industry since.

The Birth of an Advocate

Nichols’ roots run deep in the West, and in the West’s public lands heritage—a heritage parts preservation and exploitation. Growing up in Idaho with a father who worked for the Bureau of Land Management, he learned very early on the value of public lands, as well as the eagerness of corporate interests to plunder them.

“I learned about the issue of livestock grazing destroying public lands and wildlife habitat when I was five years old,” he said.

Eager to defend public lands and wildlife, he began working part-time at a Wyoming public land and biodiversity protection group during college. As he grew more familiar with the issues at play, he also discovered more about the climate crisis—first, that it “was the single greatest threat facing our planet” and, second, that “the American West stands to get hit harder than most regions.”

Soon, he was heading up his own clean air advocacy group, Rocky Mountain Clean Air Action, in the Denver metropolitan area. Why clean air advocacy? To Nichols, the West’s fresh air, the climate crisis, and the oil and gas industry are inextricably connected.

“Without fail, if you trace back smog problems, or other air pollution issues, it either goes back to a coal-fired power plant or oil and gas development or gasoline-powered transportation systems,” he said. “If you can confront fossil fuels for clean air, you’re making a difference for the climate, too. The bottom line is the more coal-fired power plants we shut down, the more oil and gas wells we prevent from being fracked, the less air pollution you have and the less climate pollution you have.”

Taking that sentiment to heart, Nichols began leading WildEarth Guardians’ then-nascent Climate and Energy program in 2008. Now, more than a decade later, he and his colleagues are gearing up to take on one of the most nefarious polluters of them all.

Pressure From the Bottom Up

Enemy of renewable energy, poster child for coal-fired power—Tri-State Generation and Transmission Association is exactly the kind of electricity provider the West doesn’t need. While other Western energy companies, like Colorado’s Xcel Energy, plan to shutter their coal-fired power plants and commit to reducing carbon emissions, Tri-State is doubling down on its investment in coal. Worse, Tri-State is making its customers pay for its expensive mistakes, raising their rates and actively preventing them from investing in renewables via restrictive contracts that extend out as far as 2050. To Nichols, this was unacceptable. It was time for Guardians to confront Tri-State.

But first, Nichols had to confront reality. Guardians’ Climate and Energy team is made up of four people, and Tri-State is a corporation employing more than one thousand. At the same time, Tri-State also supplies power to thousands of people across the West, many of them disgruntled with its high rates and anti-renewables stance—and many of them Guardians supporters.

Yes, Nichols, decided, he would rely on Guardians’ tried-and-true legal mettle to bury Tri-State under a barrage of lawsuits. But more importantly, he’d try to organize Tri-State’s customers to pressure it from the bottom up.

“The real key to speedy success is to get people agitated on the ground and to show up in ways that compel their rural electric co-ops to start to demand more of Tri-State,” he said—and, potentially, divorce themselves from it altogether.

“Truly, through our Tri-State campaign, we have the opportunity to set the model for how the West transitions away from fossil fuels completely.”

Organizing and connecting these individuals is an undertaking in and of itself. Tri-State’s co-ops sprawl across four western states and are located in predominantly rural areas. But Nichols has a secret weapon: the irrefutable economic evidence that renewables are “way, way cheaper than coal.”

“There’s absolutely no question now that if you want to provide affordable power to your customers, you’ve got to go renewable. And we’re able to bring the economic argument forward in a more powerful way than we ever have before,” Nichols said.

By giving Guardians supporters in Tri-State’s member co-ops the facts about the costs of renewables versus coal, Nichols empowered them to approach their co-ops’ boards and demand more investment in renewable energy—not to mention a reexamination of contracts with Tri-State.

While Guardians’ grassroots advocacy could certainly alter Tri-State’s fate, its purpose extends far beyond the success or failure of one unscrupulous corporation.

“Truly, through our Tri-State campaign, we have the opportunity to set the model for how the West transitions away from fossil fuels completely,” Nichols said.

He envisions a future of rural energy autonomy flourishing in place of a past steeped in fossil fuel dependence—a future in which communities throughout the American West harness the power, affordability, and economic development potential of renewable energy.

The decision of just one co-op to go 100 percent renewable can have positive, cascading effects throughout a community. Extend that decision to hundreds of co-ops and a new energy future is within our collective grasp.

“All of a sudden, you’re putting hundreds of thousands of people to work building solar panels and wind turbines and the infrastructure needed to sustain that, and then the skilled workers to maintain that system. You’re creating new lines of economic dependence that aren’t destroying the climate and that are renewable—they don’t go away,” Nichols said. “And we don’t have to wait until 2050. We can make it happen tomorrow.”