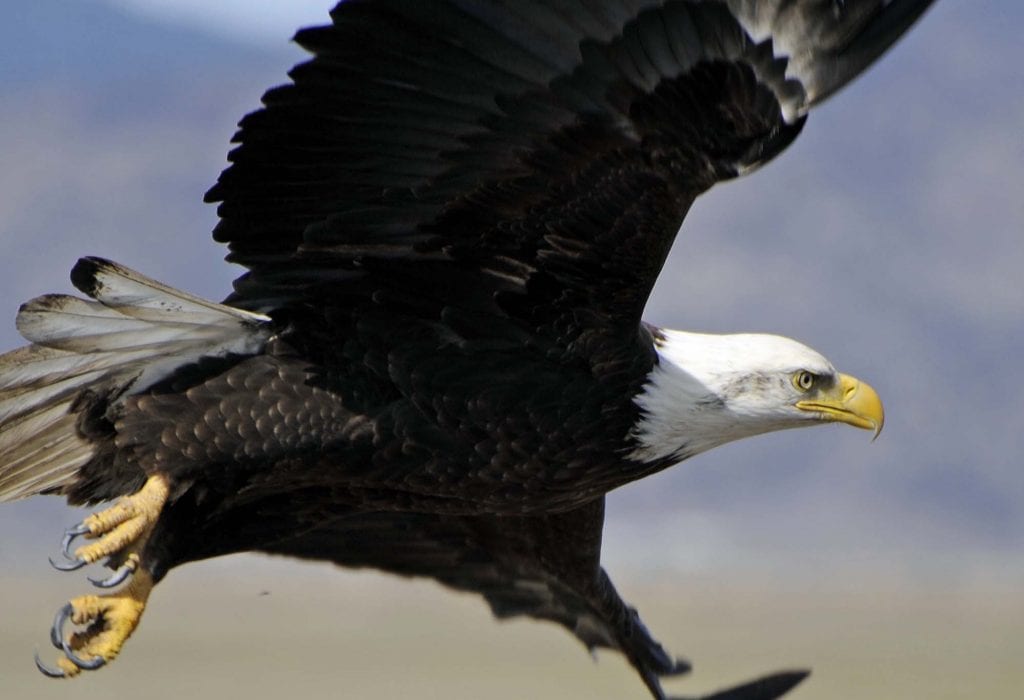 Although Interior is asking for public comment until January 28, 2019, the agency is not actually capable of receiving and processing comments due to the government shutdown. 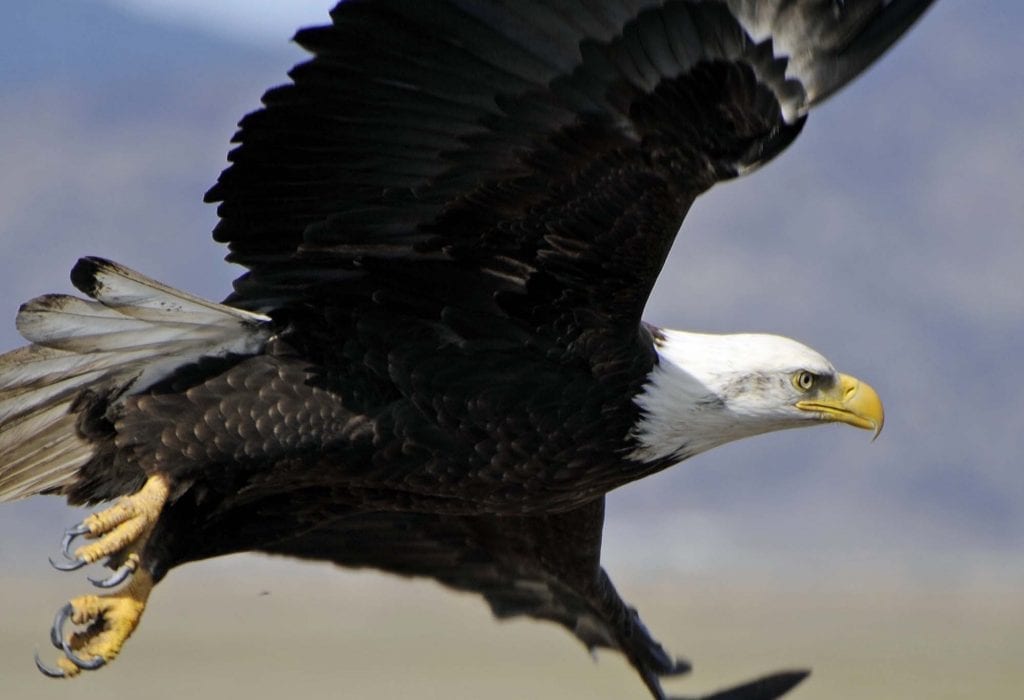 Despite a government shutdown, the U.S. Department of the Interior is proposing changes to its transparency regulations that threaten to make it more difficult for Americans to request and obtain records from the federal government.

In a proposed rule slated to be published tomorrow, Interior is calling for sweeping rule changes in order to, in its words, respond to “the unprecedented surge in FOIA [Freedom of Information Act] requests and litigation.”

Click here to view our annotated version of the most insidious provisions of the proposed rollbacks and how they completely undermine our federal transparency laws.

The proposal is a blatant attack on our democratic right to know. The Freedom of Information Act is our nation’s bedrock transparency law and it’s meant to ensure Americans have the ability to know what their government is up to.

WildEarth Guardians uses the Freedom of Information Act extensively as we watchdog the Interior Department and other government agencies. In fact, we post all records we obtain on our website so all Americans have access to information that would otherwise be unavailable.

WildEarth Guardians has been among the most prominent litigators. Our most recent complaint challenged the Interior’s failure to respond to a request for records related to the Department’s report on “Energy Burdens.” 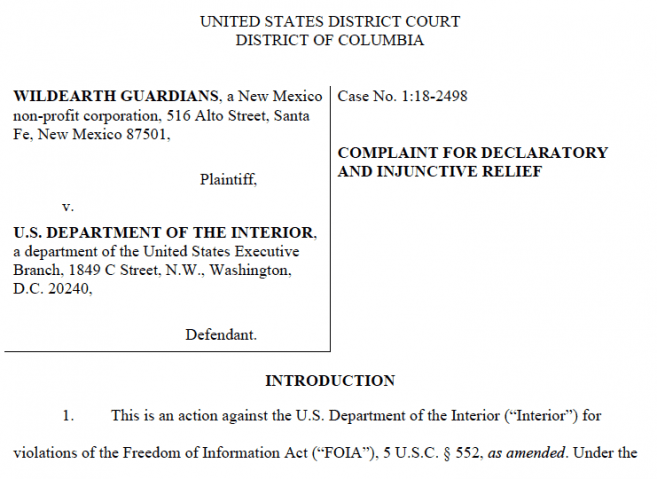 Our Most Recent FOIA Lawsuit

Yet Interior’s claim that this is a problem is belied by the fact that the Department utterly flouts the Freedom of Information Act and actively promotes a culture of secrecy, opaqueness, and unaccountability to the American public.

In our experience in dealing with the Interior Department under the Freedom of Information Act, we’ve found the agency regularly ignores deadlines, consistently finds ways to deny access to government records, purposefully drags its feet in responding to requests for information, and refuses to provide the resources and staffing needed to meet its legal obligations under federal transparency law.

To boot, among federal agencies, Interior is one of the worst in terms of making information available online.

It’s no wonder the Department gets sued. Yet rather than truly address the underlying lack of legal compliance and disrespect for transparency, Interior is instead proposing to change the rules.

Without a doubt, the proposed regulatory changes are an assault on transparency. Among the more insidious changes:

Currently, agencies have to honor all records requests, regardless of the amount of times and resources required to search for records. This reflects the fact that the Freedom of Information Act mandates full transparency and does not allow agencies to selectively censor information simply because they believe it would be “hard” to provide records.

This proposal would effectively condone footdragging and deny access to government information. The change would allow agencies to impose baseless “quotas” on information requests.

The Freedom of Information Act requires agencies provide records at no cost to organizations intending to use information to advance the public interest. Although the law requires fee waivers be granted liberally, Interior’s proposed changes would effectively turn the tables on public interest groups.

The new wording would set higher and nearly unattainable criteria, provide more discretion to deny fee waivers, and allow the Department to second-guess claims that information would serve a public interest.

For example, the proposal would allow Interior to deny fee waivers if it deems a request does not “concern discrete, identifiable agency activities, operations, or programs with a connection that is direct and clear, not remote or attenuated.”

Overall, the proposed rule aims to add more subjectivity into the Interior Department’s transparency regulations, clearly intending to give agencies more discretion to deny access to information and to deny fee waivers.

Overall, the changes appear to be blatantly contrary to the Freedom of Information Act. Click here to see our annotated version of the Department’s proposed rule with our comments on how it runs afoul of federal law.

Earlier this year, we led a coalition in calling on the Interior Department to defend the Freedom of Information Act and government transparency. In a letter to outgoing Secretary, Ryan Zinke, we stated:

It is an affront to the bedrock of democracy that the agency would suggest asking Congress to make changes to the law in order to limit requests for information, impose burdensome fees, and otherwise seek changes that are clearly meant to stymie, not promote, public engagement.

Sadly, it’s clear Interior has no interest in defending the right for Americans to know what their government is up to.

Rather than uphold the democratic ideal of the freedom of information, Interior is instead treating our transparency laws as a “burden.”

Ironically, and perhaps not surprisingly, while Interior is moving ahead with transparency rollbacks, the Department is refusing to accept requests under the Freedom of Information Act.

In response to the proposed rule, we submitted a request today for records underlying the changes. The response from Interior? “Due to the government shutdown, no FOIA requests can be accepted or processed at this time.”

Rest assured, we will be pushing back against Interior’s attacks on transparency and our democracy. Access to information is critical for ensuring Interior is defending our public lands, wildlife, National Parks and Monuments, climate, and more.

America can’t afford rollbacks of Freedom of Information rights. Whether you’re on the right, the left, in the middle, or anywhere else in between, we simply can’t allow our government to retreat into the shadows.

We will do everything we can to ensure these illegal rules never see the light of day.