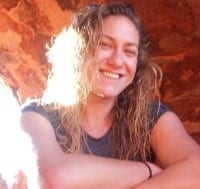 Rebecca Sobel first joined Guardians as our first Conservation Organizer in 2007, later becoming Senior Climate and Energy Campaigner, until moving into her role as Organizing Director of Guardians new Organizing program in 2021. With a bachelor’s degree in an individualized major “Globalization and Social Justice ” and a masters degree in International Relations and Human Rights, Rebecca has focused her professional career on social and environmental justice. Starting with Greenpeace as a Field Organizer, where she organized the March for Climate Action in Vermont with Bill McKibben, Rebecca has previously served as the Executive Director of the New Mexico Coalition for Clean Affordable Energy, and principal of Action Oriented campaign consulting firm before returning to Guardians in 2016. Originally from Philadelphia, Rebecca feels blessed to call the Southwest her home.